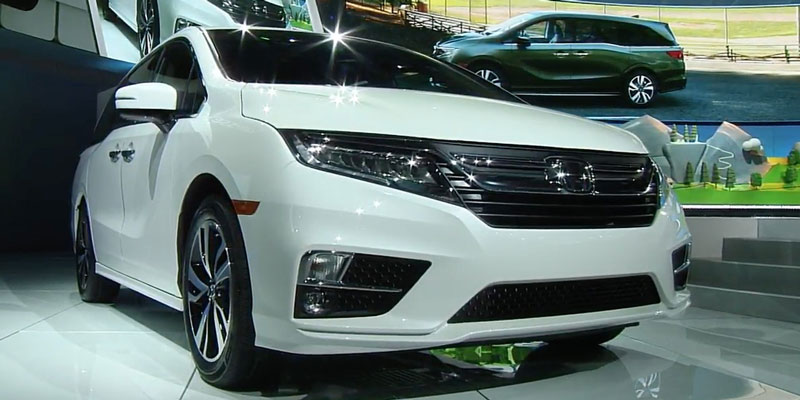 DETROIT, Michigan — Honda today introduced the world to the latest version of its Odyssey minivan, a top-selling model that is produced at the company’s Alabama factory.

“In all aspects of its design, the new Odyssey is made to keep every member of the family happy, no matter the seating position, no matter the destination,” he said.

The Odyssey is a key part of the lineup at Honda’s $2.2 billion auto assembly plant in Talladega County, where more than 4,500 workers help build it, along with the Pilot SUV, Ridgeline pickup, Acura MDX SUV and the engines that power all four models.

The Odyssey also was the first vehicle the automaker produced in Alabama, with the first one rolling off the assembly line in November 2001. Since then, an estimated 2.3 million have followed.

“Honda is a huge pillar of Alabama’s auto industry, responsible for thousands of jobs and millions of dollars in investment as it continually expands, takes on new models and spins off additional support businesses in the state,” said Greg Canfield, secretary of the Alabama Department of Commerce.

“It all started with the Odyssey, and we can’t wait to see how this latest version of Alabama workers’ innovation and craftsmanship attracts even more customers to the brand.”

On the outside, Mendel said, the fifth generation of America’s best-selling minivan takes Odyssey styling to a new level of sophistication and premium design: Low, wide, improved aerodynamics, a more sharply sculpted body side and a fresh new take on the signature lightning bolt beltline.

Under the hood, a brand new 3.5-liter direct-injected V6 engine is mated up to one of two new transmissions, including the first-ever Honda-developed 10-speed. Honda’s transmission plant in Georgia will lead global production of the new 10-speed, which will make its way into other Honda vehicles in the future.

Inside the new Odyssey, there is a host of new and improved family-friendly features focused on functionality and connectivity, including:

• The CabinWatch system that allow parents to get a bird’s eye view of the second and third row seats through a ceiling-mounted camera, day or night

• CabinTalk technology, which acts as an in-car PA system so Mom and Dad can directly connect with the kids

• The CabinControl app that allows passengers to control the rear entertainment system, audio, heating and AC from their smartphones

• A “How Much Farther?” app that lets kids track their journey’s progress

Mendel said Honda’s research showed third row users, typically older kids in the family, felt left out, so some of the new features are aimed at fixing that.

In addition, there are new and improved premium safety features throughout the updated minivan.

“We know our customers are really going to love this new Odyssey and all it has to offer,” Mendel said.

‘TRUCK OF THE YEAR’

It’s already been a big day for Honda Manufacturing of Alabama at the Detroit auto show.

This morning, the Alabama-made Ridgeline pickup was named the 2017 North American Truck of the Year, besting two other finalists: the Ford F-series Super Duty and the Nissan Titan.

“This award is a prized validation of the innovations and advantages the Ridgeline offers midsize pickup truck customers and a great recognition of the American development team’s work,” Mendel said. “This is a terrific way to kick off 2017, and we’re looking forward to sharing more innovative Honda products in the year ahead.”

The Talladega County plant last spring launched mass production of the redesigned Ridgeline, which adopts a more traditional pickup profile than its predecessor.

Promoted as the “ultimate tailgater,” the 2017 Ridgeline has an audio system built into the truck bed, along with a 400-watt power inverter that can energize a blender, flat-screen TV or other gameday gear.

It’s also the first and only pickup to earn a TOP SAFETY PICK+ rating from the Insurance Institute for Highway Safety, when equipped with available front crash prevention system and LED headlights.

This marks the Ridgeline’s second Truck of the Year of the award; the first was in 2006 when it debuted in the market.