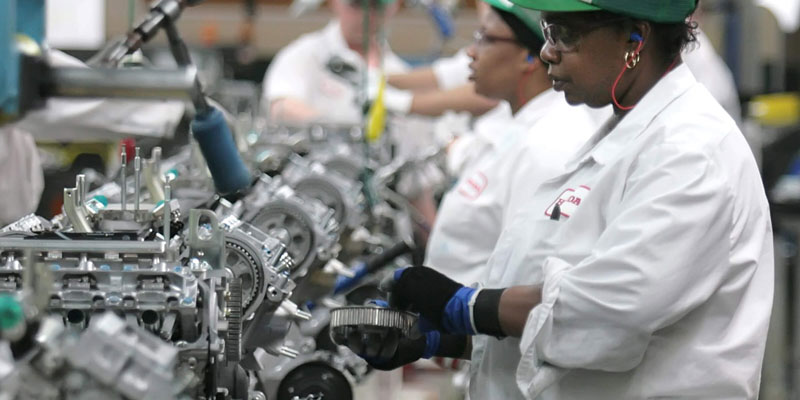 As Alabama’s auto industry has grown over the past two decades, so have the jobs and the sophisticated skill sets required to keep production humming.

The majority of the positions at the state’s three auto assembly plants are in production, but the automakers have also built up their ranks of other highly-skilled professionals.

At Honda Manufacturing of Alabama in Talladega County, for instance, there are about 700 engineering professionals in a wide variety of disciplines including electrical, mechanical and civil. The number of positions has increased proportionately to the number of products Honda Alabama is now building.

“When we first started production, we were a new plant, building one product, the Odyssey minivan, and one variation of the 3.5 liter V-6 engine. And because we were a new plant, much of our engineering expertise came from our experienced plants in Ohio, Canada and Japan,” Honda Alabama Vice President Mike Oatridge said.

But since Honda Alabama began producing vehicles 15 years ago, it has become the primary source of light truck production for the automaker and is now the exclusive supplier of the Odyssey, the Pilot SUV, the Ridgeline pickup and the Acura MDX luxury SUV.

Along with the volume increase, the technology has grown more advanced as well.

“The V-6 engine that we first started building has become more complex with the introduction of direct fuel injection, a technology that was in its infancy when we first started,” Oatridge said.

“In fact, almost all of our vehicles now have advanced technology as standard equipment – features such as side curtain airbags, back-up cameras and Bluetooth connectivity.”

Meanwhile, in the past three years, the plant’s workforce has executed four new model changes, an unprecedented schedule among Honda plants.

“So, with all those new models, along with new technology and advanced safety features, we have seen the skills to develop, build and test our vehicles become just as advanced. And that’s why our engineering requirements have continued to expand,” Oatridge said.

Steve Sewell, executive vice president of the Economic Development Partnership of Alabama, said there’s been a huge shift across Alabama’s auto industry when it comes to technology, and it’s affected everyone from line workers to those in other positions at the plants.

When Mercedes-Benz kicked off the state’s auto sector in the 1990’s, there was very little automation. But that changed quickly as it took over the global auto industry and other advanced manufacturing operations.

These days, automakers are recruiting for highly technical, skilled positions.

“Automation in technology really changed the definition of an automotive worker in this state and what’s needed for that,” Sewell said. “There’s a high demand for robotics technology, for example, and it’s extremely important for us to be able to deliver that workforce training.”

Among Alabama’s assets in this area are the Robotics Technology Park, a complex that is a collaboration among worker training agency AIDT, Calhoun Community College and the world’s leading robotics companies.

“The partnerships with the universities is something we began to talk about 20 years ago, and now that’s something that’s in place and extremely important to these companies,” Sewell said.

At Honda Alabama, as the technology of the plant’s products has increased, so has the complexity of the production process, Oatridge said. The tools, equipment and machinery are much more advanced than they were in the beginning.

Currently, the plant has about 250 maintenance technicians and expects to hire about 20 per year for the next several years.

“We still have a great need for associates who are mechanically inclined. But along with mechanical training, there is also a demand for electronics expertise,” Oatridge said.

“For example, about two years ago, we invested in an advanced servo-motor stamping press, to complement our two existing hydraulic stamping presses. The operation of the servo-motor press required additional training for those in the stamping process and a whole new skill set for our associates who must maintain and service it.”

Honda Alabama is working with several two-year colleges and school-to-work programs to fill the jobs and also has a workforce development program that reaches out to high schools, colleges and the general public, with public demonstrations that show off typical tasks at the plant.

Since its startup 15 years ago, Honda Alabama has been in a near-constant state of growth, Oatridge said.

“The automotive industry offers a wide variety of both skilled and professional work disciplines,” he said. “Our facility in Lincoln is almost a microcosm of a small city. Along with our engineers, we have professionals in information technology, accounting, logistics, purchasing, process design, human resources, business management … the list just goes on and on.”