Unfunded liabilities in Alabama’s pension system have increased 500% since 2003. It’s time for reform.

An overwhelming majority of economists believe that, without pension reform, states will be forced to resort to austerity budgets, federal bailouts, and/or default.

This is especially a concern for Alabama, given that we are already finding it difficult to balance our budget. Many states, including Alabama, have established committees to analyze the health of their state pension system and to explore potential reforms. Half-measures and partial reforms within the same structure, however, will only temporarily patch over the problem. Only structural reform could ensure public employees, teachers, and judges their hard-earned retirements and minimize the strain of underfunded retirement systems on current and future taxpayers.

As a major policy issue facing Alabama, in forthcoming research with my Johnson Center colleague, John Dove, we will provide an in-depth analysis of the health of the Retirement Systems of Alabama (RSA) and offer avenues for structural reform.

RELATED: How an Alabama state employee built a billionaire’s lifestyle in a taxpayer-funded job (opinion)

First, we have to accurately assess the funding health of the RSA as it stands today. One method that has been frequently used to examine the financial position of the RSA is the growth in Total Assets Under Management (TAUM). The RSA’s TAUMs have increased an impressive 43.15% since 2000. But, adjusting this data for inflation drops the increase down to 9.44%. Even this growth rate reflects, primarily, increased state and member contributions to the RSA. If we hold state and employee contributions per member constant at the level they were in 2001, TAUM growth drops to a negative 2.51%. And that is despite the fact that state contributions from nearly 160,000 withdrawn members over this period are still included in this total. This is because contributions made by the state on the behalf of members who withdraw from the system are not given to these employees or even returned to the state; they remain in the RSA.

In every annual edition between 2000 and 2005 of the RSA’s Pension Trust Fund section of the State of Alabama Comprehensive Annual Financial Report accurately states that, “Analysis of this percentage [the funded ratio] over time indicates whether the respective system is becoming financially stronger or weaker. Generally, the greater this percentage [funded ratio], the stronger the retirement system.” According to the RSA’s own projections, the funded ratios of the Teacher’s Retirement System (TRS), Employee’s Retirement System (ERS), and Judicial Retirement Fund (JRF) have drastically declined. In fact, the RSA reported that the TRS and ERS were fully funded in 1999. Since then, their funded ratios have fallen to 66.2% and 65.7% respectively (the JRF went from 84.2% in 1999 to 58.7% in 2013). 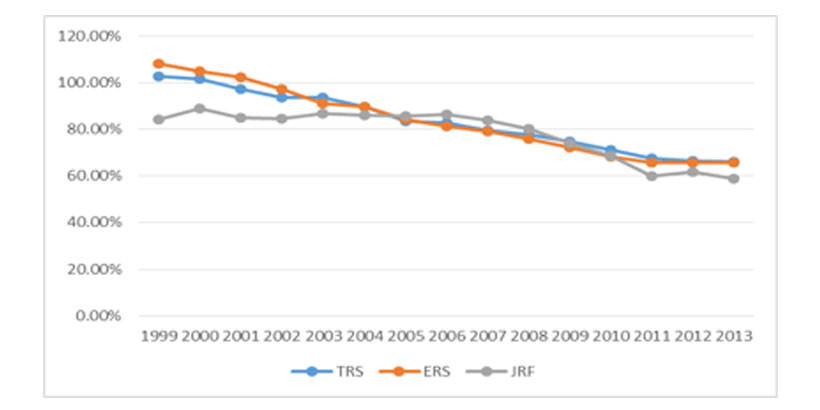 It is clear that partial pension reform will not be sufficient to meet these liabilities. Our study points to several avenues for structurally reforming the RSA, including successful reforms implemented in Utah and Michigan. While legislators cannot – and should not – change obligations already incurred, they can reform the pension system for future employees and offer current employees the voluntary option to transition to a new system.

More importantly, portable and customizable retirement options will benefit – and help recruit – future state workers. The Bureau of Labor Statistics reports that the median state and local employee will stay at their current job only 7.4 and 7.9 years, respectively. The RSA’s 10 year vesting period does not provide an attractive or fair retirement plan for workers in today’s economy when compared to the private sector. For instance, Vanguard reports that 47% of participants in their employer plans offer immediate vesting of employer contributions. An additional 26% of participants are fully vested within three years. Withdrawn RSA members, including some of the spouses of our military service members, even receive a raw deal on their own contributions; while the RSA assumes an 8% rate of return, withdrawn employees receive only 2% interest on their own contributions if they leave between 3 and 16 years (they receive 0% interest if they leave in under three years).

One objection to reform is that while it will save taxpayers money in the long-term, costs will increase in the short-term. This would certainly be a dilemma for a state like Alabama facing difficult budgetary times. This objection is based on a misunderstanding of the accounting rules for public pensions. While our suggested reforms do require a change in the accounting methods used in the RSA’s reporting, legislators are not required to change how they have been funding the system based upon the new accounting standards. Thankfully, the RSA’s actuary, Cavanaugh MacDonald, cleared this up in their capacity as the consulting actuary for the Kansas Public Employees Retirement System, stating that the accounting rules were “strictly related to accounting for pension benefits, and does not represent a requirement to fund the plan under the standard.”

Daniel J. Smith is the associate director at the Johnson Center for Political Economy and an associate professor of economics at Troy University. Follow him on Twitter: @smithdanj1