Peggy Sutton is a 2018 Yellowhammer Woman of Impact 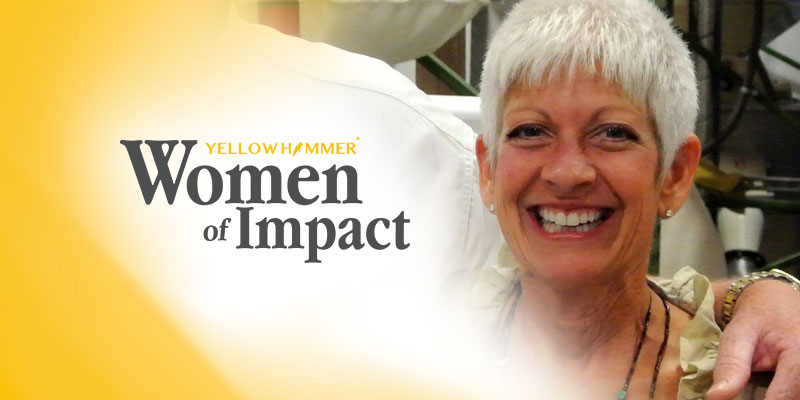 Peggy Sutton did not start out wanting to create a powerhouse food business. She just wanted to eat like her grandparents did.

Sutton, a 2018 Yellowhammer Woman of Impact, planted grains at her home in Fitzpatrick about 15 years ago and waited for them to sprout. Before the Industrial Revolution, most people made flour from spouted grains, not from crops harvested with a combine.

Sutton soaked the grains in mason jars in 2005, dried them and then ground them into flour with a small mill in her home.

“I was blown away by the taste,” she told Kitchn.com in 2015. “It was so good, and I was hooked. And to me, that’s actually the most important thing.”

The real benefit, the secret to Sutton’s commercial success, were the health features. She told Kitchn.com that flour from sprouted grains preserves vitamins and minerals that are eliminated in modern farming. Those nutrients produce naturally fortified flour.

At first, Sutton tried to spread the gospel of sprouted grains, but friends and relatives asked Sutton if she could just make the grains for them. She did, and To Your Health Sprouted Flour Co. was born, according to the company’s website. More than a decade later, Sutton’s idea has grown into a business that produces more than 3.6 million organic whole-grain sprouted flour a year and is the largest supplier of organic sprouted flours in the world.

The production moved from her home kitchen to a commercial kitchen inside a barn in 2006 and four years later moved up to a 7,200-square-foot facility. The company added a second facility in 2013 and expanded again in 2015. To Your Health Sprouted Flour Co. employs more than 30 people and ships grains, flours, legumes, seeds, nuts and other snacks to 14 different countries.

Sutton touts the not-too-subtle differences between her flour and the products on sale at the local supermarket.

“It’s the difference between eating a tomato and a potato,” she told Alabama Power’s Alabama NewsCenter last year. “Sprouted flour tastes better, is easier to digest, has more enzymes and is just more nutritious than regular flour.”

Sutton did not just luck into the business. She had spent three decades working in marketing and management positions in Montgomery, Atlanta and Columbus, Georgia. She returned home to Fitzpatrick, a rural community south of Montgomery, to take a job as director of the Alabama Hospice Organization.

Then, the flour business started to take off. Orders grew so fast that she decided to stop making baked goods and concentrate full time on producing flours. It was a call from Whole Foods that kicked the business to a different level. The chain grocery store wanted 10,000 pounds.

“At that time, we were only making about 1,000 pounds a week, but I knew we could do it,” she told Alabama NewsCenter. “Unfortunately, we live at the end of a dirt road, and the trucks couldn’t get in to pick up all that flour. So we had to expand.”

Sutton’s business even has landed her picture on the back of Kashi cereal boxes. She told This is Alabama last year that Kellogg’s, which makes the organic cereal, contacted her in 2014 and decided to use her image after hearing her company’s homegrown story and coming away impressed with the quality of the grain.

“I told my husband, it’s not the front of the Wheaties box, but I’m not complaining!” Sutton told the website.

Sutton will be honored with Gov. Kay Ivey in an awards event March 29 in Birmingham. The Yellowhammer Women of Impact event will honor 20 women making an impact in Alabama and will benefit Big Oak Ranch. Details and registration may be found here.