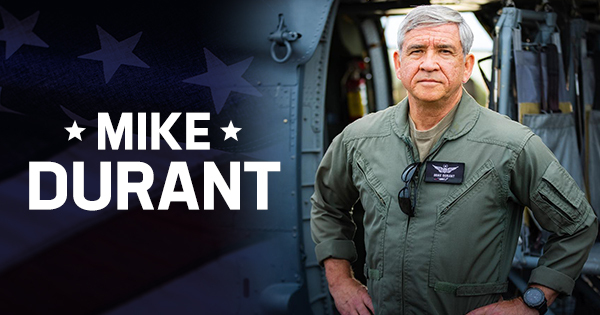 Army veteran and political newcomer Mike Durant is running to be Alabama’s next U.S. Senator. Durant is best known for his military background, including his role in the “Black Hawk Down” incident.

In 1993, two Army Black Hawk helicopters were shot down in Somalia. The lone survivor: Mike Durant.

This is how Durant described the horrific event and the sacrifice of his fellow servicemen to National Geographic: “There wasn’t a person involved in that mission who didn’t put their life on the line that day for someone or to support the mission…we get caught up in a lot of other things. But, that selflessness and commitment to each other and commitment to the mission, I think is at the core of this story.”

Mike Durant was held captive and tortured for 11 days by Somali General Mohamed Farrah Aidid. During this time, Mike Durant never gave up or gave in to the enemy.

In recalling the experience, Durant said, “In my mind, I died. When we crashed, I was knocked unconscious…So, you sort of have this rebirth where now you have this second life. You thought your life was over, and what do you do with it?”

For his service and sacrifice, Durant was honored with the Purple Heart, the Army Distinguished Service Medal and the Distinguished Flying Cross.

Now, Mike Durant is signing up for one more tour of duty. This time to serve Alabama in the United States Senate.

Durant is the definition of a conservative outsider. He doesn’t need the job. He just wants to continue his lifetime of service to the state and country he loves.

“Washington is filled with career politicians who didn’t serve their country and never had a real job. I’m running for U.S. Senate to change that,” Durant said in a recent television advertisement.

After retiring from the Army with 22 years of active-duty service, Durant started a business in Huntsville, Alabama. The business grew from a small start-up to a large company employing over 500 people, including many veterans.

As a political outsider, Durant will challenge the status quo and stand up to the career politicians who have failed our country.

Durant has promised to be a voice for Alabamians: fighting to take on China, strengthen our military, secure the border, stand up to the woke mob, and cut taxes. His commonsense approach is a result of his years of experience in the private sector and as an Army pilot.

In a race against career politicians and political insiders, Mike Durant stands out as the clear choice to serve Alabama in the Senate.

PAID FOR BY ALABAMA PATRIOTS PAC.
NOT AUTHORIZED BY ANY CANDIDATE OR CANDIDATE’S COMMITTEE.