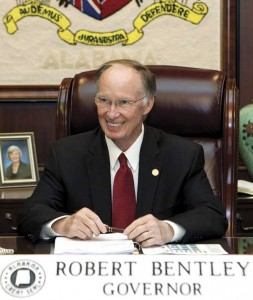 “With Governor Bentley’s signature today, Alabamians’ second amendment rights are more secure than ever,” House Speaker Mike Hubbard said in a statement. “Despite President Obama and the Democratic Party’s determination to limit the rights of gun owners across the U.S., Alabama has proven once again that our constitutional right to bear arms will continue to be prioritized and protected in our great state.”

The bill was one of the most contentious of the 2013 legislative session.

Legislators were able to get each of the above groups on board with the final bill, with the exception of the BCA, which represents the state’s business community.

BCA President and CEO Bill Canary said repeatedly throughout the process that he felt the bill violates the property rights of business owners by requiring them to allow individuals individuals to leave a pistol locked in their car at work.

Other provisions of the final bill include: