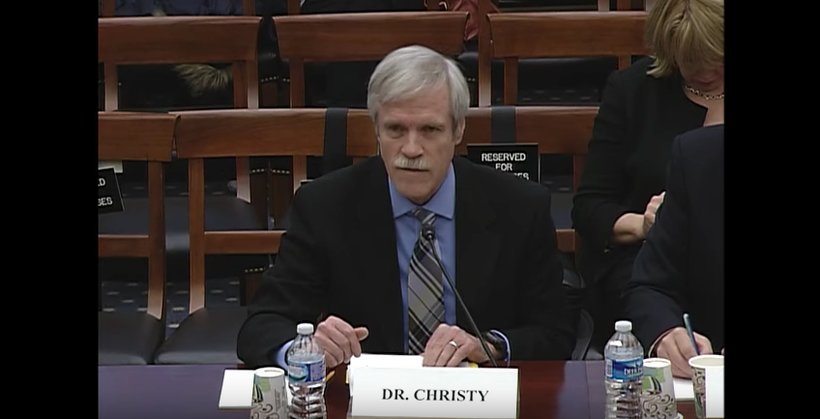 (Video above: Dr. John Christy testifies before the House Committee on Science, Space and Technology)

WASHINGTON — Alabama’s state climatologist during Congressional testimony on Wednesday warned members of the U.S. House that global warming projections, many of which have been used to justify the Obama administration’s climate agenda, have been wildly inaccurate when compared to real data.

“I would not trust model projections on which all policy is based here because they just don’t match facts,” said Dr. John Christy, a climate scientist at the University of Alabama in Huntsville (UAH) who has been Alabama’s State Climatologist since 2000.

To illustrate his point, Christy displayed a simple chart before the committee that shows how wildly inaccurate global warming projections have been once compared to real data.

The red line on the chart below shows the average temperature increase that all of the global warming models projected over the last several decades. The green circles and blue squares at the bottom are the climate variations that actually occurred. 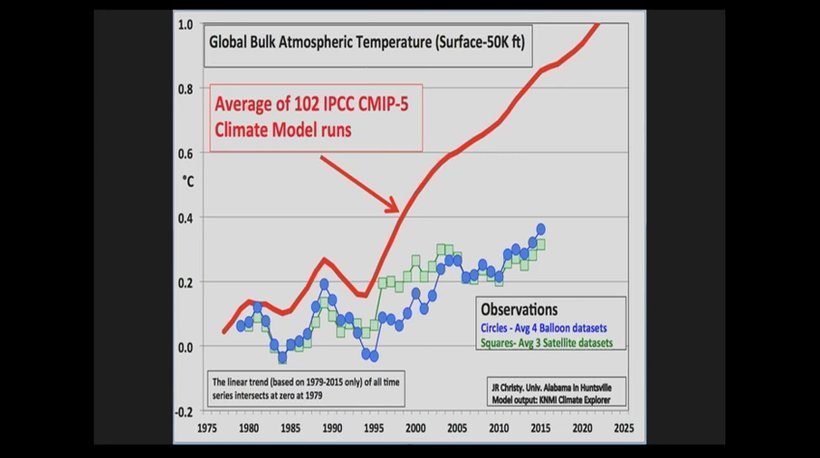 “This particular chart has caused considerable anxiety for the climate establishment who want to believe the climate system is overheating according the theory of how extra greenhouse gases are supposed to affect it,” Dr. Christy stated calmly. “The message here is very simple: the theory does not match the observations as measured independently by both satellites and balloons.”

“It is a bold strategy on the part of many in the climate establishment to put one’s confidence in theoretical models and to attack the observed data,” he continued. “To a scientist, this just doesn’t make sense.”

This is the second time Dr. Christy has made climate-related news in recent weeks.

In January he found himself at odds with many scientists and media outlets who were claiming 2015 was the hottest year on record.

“2015 Was Hottest Year in Historical Record, Scientists Say,” read a headline atop the New York Times.

“The whole system is warming up, relentlessly,” warned Gerald A. Meehl, a scientist at the National Center for Atmospheric Research.

“At some point, you would think most climate change deniers would throw in the towel,” added Peter Hannam, Environment Editor of the Sydney Morning Herald.

Dr. Christy agrees with his colleagues that the climate is always changing, but believes their alarmist rhetoric — and even some of their research — is misguided at best, and perhaps even deliberately misleading.

The temperature data cited by most global warming alarmists comes from surface-level measurements, which are notoriously inaccurate.

A 2009 study of the surface-level reading stations found many of them “located next to the exhaust fans of air conditioning units, surrounded by asphalt parking lots and roads, on blistering-hot rooftops, and near sidewalks and buildings that absorb and radiate heat.” Sixty-eight stations were found to be “located at wastewater treatment plants, where the process of waste digestion causes temperatures to be higher than in surrounding areas.”

Dr. Christy notes that there are more accurate ways to measure temperature data, but they are often ignored by climate scientists because they do not affirm their predetermined outcomes.

“The deep atmospheric temperature – a much better metric for monitoring climate – as measured by satellite sensors was the 3rd warmest year since 1979,” he said of 2015. “If no mention is made of what the bulk of the atmosphere is doing, then these folks are withholding important information.”

Dr. Christy laid out his approach to climate science during testimony before the U.S. Senate last year.

“I build data sets from scratch to answer questions about climate variability and to test assertions people make about climate change,” he said. “That’s really what the scientific method is all about.”

It is that commitment to starting “from scratch” that has made him a particularly bothersome thorn in the Environmental Protection Agency’s (EPA) side in recent years.

While Christy does not deny the Earth’s climate is changing, he vehemently rejects the assumptions at the core of the EPA’s growing list of environmental regulations.

In its Clean Power Plan, the EPA is pushing for a 750 million metric ton reduction in CO2 emissions, which it seeks to achieve in large part through regulations on existing power plants, especially coal-fired plants.

A study released by the U.S. Chamber of Commerce last year predicts the environmental mandates in the plan will ultimately cost the United States more than 220,000 jobs.

According to the study, the proposed regulations will have a disproportionate impact on southern states, where energy costs would jump by $6.6 billion per year over the next decade-and-a-half. The “East-South-Central” region of Mississippi, Alabama, Tennessee and Kentucky would see its GDP shrink by an estimated $2.2 billion and would lose 21,400 jobs as a result of the plan.

Dr. Christy on Wednesday testified that such onerous regulations will do little to nothing to actually impact the climate.

“If the United States had disappeared in 2015, no more people, no cars, no industry, the impact on the climate system would be a tiny few hundredths of a degree over 50 years – and that’s if you believe climate models,” he concluded.