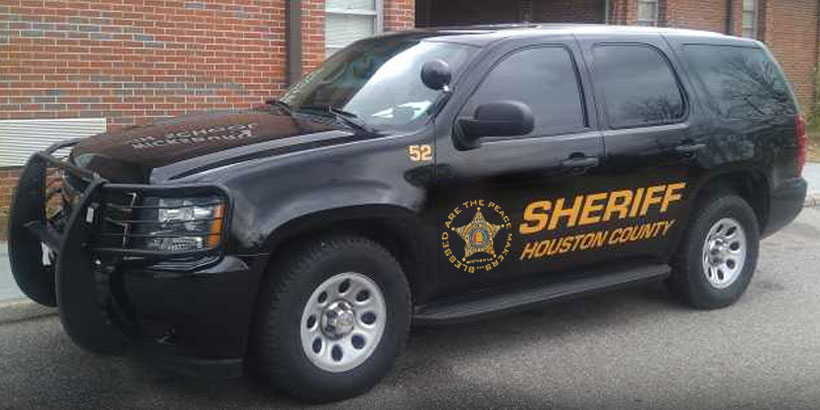 HOUSTON COUNTY, Ala. — The Wisconsin-based atheist group the Freedom From Religious Foundation, a non-profit which has become notorious for its attempt to bully organizations and municipalities into abandoning Christian symbols how now set its sights on the Houston County Sheriff Department.

Houston County Sheriff Donald Valenza recently placed small decals on the back of every patrol car in his service with an excerpt from Matthew 5:9, stating “Blessed are the peacemakers.”

“I’ve always had religious belief, and I feel like that’s kept me alive,” Valenza said. “We’ve used that (quote) with (the special response team) for 15 years. It symbolizes the Houston County Sheriff’s Office.”

The decals, which Valenza said cost about $1.60 each, received mostly positive feedback from Alabamians and Houston County residents, but that isn’t acceptable to FFRF.

“Placing decals that literally quote chapter and verse on Houston County property is a clear endorsement of Christianity, especially when the quote is viewed in its full context,” wrote FFRF Staff Attorney Sam Grover to Sheriff Valenza.

Another FFRF staff attorney told AL.com that the organization will take further action if the sheriff refuses to comply to their order—including filing a civil lawsuit.

A request for comment from Sheriff Valenza was not immediately returned.

U.S. Supreme Court precedent on the Establishment Clause issue has been mixed. School employee-directed prayer has been outlawed since the 1962 decision Engel v. Vitale and direct religious displays of solely Christian symbols on the entrances of state buildings were banned after Allegheny County v. Greater Pittsburgh ACLU in 1989.

However, recent rulings have been more friendly towards the expression of Christianity in the public square. The 2014 ruling of Town of Greece v. Galloway allows for city councils and other public boards to open their meetings with an explicitly Christian prayer, holding that judges may not act as “censors of religious speech” simply because the prayers reflect the views of the dominant faith.

In certain contexts, the Supreme Court has also allowed for religious displays, such as the Ten Commandments and Nativity scenes, to be displayed if the conditions are right and they serve some “valid secular purpose.”

Last week it was revealed that FFRF has also sent letters to several southern colleges urging them to ban chaplains from their athletic programs. The chaplains, who are not school employees, conduct voluntary prayer sessions and counsels students. Chaplains are common in many public institutions, including the US Congress and military.