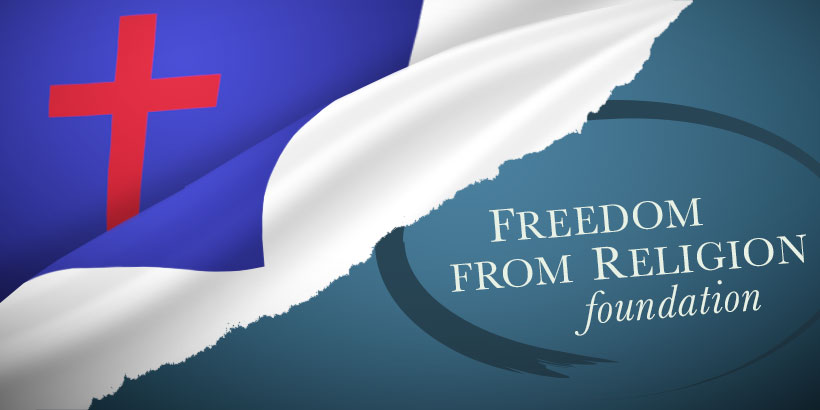 GLENCOE, Ala. — An out-of-state atheist organization has challenged the city of Glencoe’s display of a Christian flag as a violation of the separation of Church and State.

The Wisconsin-based group, the Freedom From Religion Foundation (FFRF), has threatened small-towns in Alabama before by targeting Rainbow City’s Nativity scene and Piedmont’s Christmas parade.

In both instances the towns came together to push back against FFRF’s bullying, but Glencoe’s leaders are taking a more cautious approach.

According the the group’s website, FFRF sent a letter of complaint to Glencoe city hall back in March, but the flag, which flew in front of City Hall, was not removed until about two weeks ago when the Mayor received a second letter threatening legal action.

In an interview with Fox 6 News, Mayor Charles Gilchrist said the city attorney warned about another town that was sued over a similar matter. That town had to pay $500,000 in damages plus $50,000 in legal fees.

“That would just about ruin us,” said Gilchrist. “That’s what they do, they pick on these smaller towns that can’t defend ourselves.”

“As a practical matter, most municipalities don’t have a flag like Glencoe had,” city attorney James Turnbach told Yellowhammer Monday. “A standalone Christian flag is not constitutional.”

“The case law that my firm has reviewed is not in favor of the position of Glencoe as the flag was flying.” Turnbach added “You could have other flags flying with that flag representing other religions and theologies.”

U.S. Supreme Court precedent on the Establishment Clause issue has been mixed. School employee-directed prayer has been outlawed since the 1962 decision Engel v. Vitale and direct religious displays of solely Christian symbols on the entrances of state buildings were banned after Allegheny County v. Greater Pittsburgh ACLU in 1989.

However, recent rulings have been more friendly towards the expression of Christianity in the public square. The 2014 ruling of Town of Greece v. Galloway allows for city councils and other public boards to open their meetings with an explicitly Christian prayer, holding that judges may not act as “censors of religious speech” simply because the prayers reflect the views of the dominant faith.

In certain contexts, the Supreme Court has also allowed for religious displays, such as the Ten Commandments and Nativity scenes, to be displayed if the conditions are right and they serve some “valid secular purpose.”

The Glencoe Christian flag had flown since 1992 and according to Turnbach, “So many people in the community were comfortable with the flag and the statement it made.” The city is not planning to fight the removal.