Congresswoman Terri Sewell is a 2018 Yellowhammer Woman of Impact 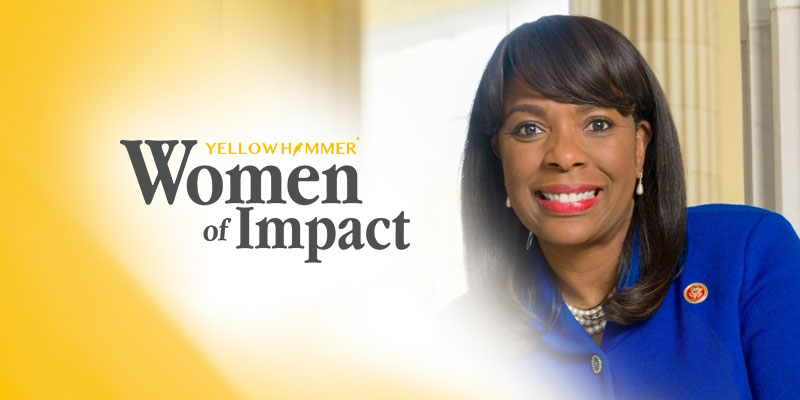 If you only read U.S. Rep. Terri Sewell’s resume, it might be tempting to assume she grew up with connections and privilege.

She went to Princeton University for her undergraduate degree.

She went to Oxford University for her master’s degree.

She went to Harvard Law School for her doctorate in law and began her legal career at a Wall Street firm.

But the lifelong Democrat who represents Alabama’s 7th Congressional District, and who will be honored this month as a Yellowhammer Woman of Impact, said in an interview with Roll Call that she considers herself a “little girl from Selma” whose remarkable path began when she got to go to Princeton.

“That was the ticket that sent me on my way,” Sewell said.

She also grew up in a strong family that emphasized academics, said Sewell spokesman Chris MacKenzie in an interview with Yellowhammer News.

“Her parents were very inspirational figures in her life,” MacKenzie said, adding that Sewell’s father was “a very driven person” and coach of the Selma High School basketball team. Her mother was a librarian.

“Together, they gave me a hunger for learning,” Sewell recently wrote of her parents in an op-ed for the Huffington Post.  “I remember spending countless hours in the library reading through books that brought to life all of the places I wanted to travel someday.”

Sewell became the first black valedictorian of her high school in 1982. A Perkins student loan then helped her get to Princeton because her family did not have the resources to send her to college on their own, she wrote.

At Princeton, Sewell was matched up with a student mentor named Michelle Robinson, she told Roll Call. The two became friends and Sewell said it was like “two worlds colliding” when her “Big Sis” went on to marry another of Sewell’s future friends she’d meet at Harvard:  Barack Obama.

After school, Sewell worked as a lawyer in New York for a decade until her dad had a series of strokes that left him disabled. She came back to Alabama to support him and began working as a public finance lawyer, helping secure funding for local construction of major properties such as the Children’s Hospital in Birmingham and the new stadium at Alabama State University.

“That was part of her beginning to work more with members of the local community and helping to develop Alabama’s 7th district,” MacKenzie said.

Fast forward: Rep. Sewell is now in her fourth term and not only is she one of the first women from Alabama to serve in Congress — she is the first black woman elected to the state’s Congressional delegation.

In addition to serving on key committees such as the powerful House Ways and Means Committee, Sewell’s office said the following are just a few of her most notable accomplishments:

— Sewell’s first piece of successful legislation recognized with Congressional Gold Medals the four little girls who died in the 16th Street Baptist Church bombing in 1963.
— She advocated for the Air Force to successfully bring the F-35A basing location to the 187th Air National Guard Fighter Wing unit in Montgomery.
— Sewell fought to keep rural Alabama hospitals open, including John Paul Jones Hospital in Camden, by working with rural hospitals, local public officials, stakeholders and constituents.
— She successfully helped Selma’s historic federal courthouse where Martin Luther King, Jr. was jailed, get off the list of endangered federal buildings and worked with the Southern District Court of Alabama to resume federal trials there.
— She successfully introduced and passed bipartisan legislation to incorporate Birmingham’s civil rights sites into the National Park Service system.
— Sewell each year hosts an annual job fair in her district that last year hosted more than 60 employers and 600 job seekers.
–She designed a workforce development initiative called Project R.E.A.D.Y to promote employment through public/private partnerships, job readiness, skills training and career development.
The congresswoman and Governor Kay Ivey will be among 20 Alabama women honored in a March 29 awards event in Birmingham. Event details and registration may be found here.