Down Syndrome Man Offers Moving Testimony for the Sanctity of Life 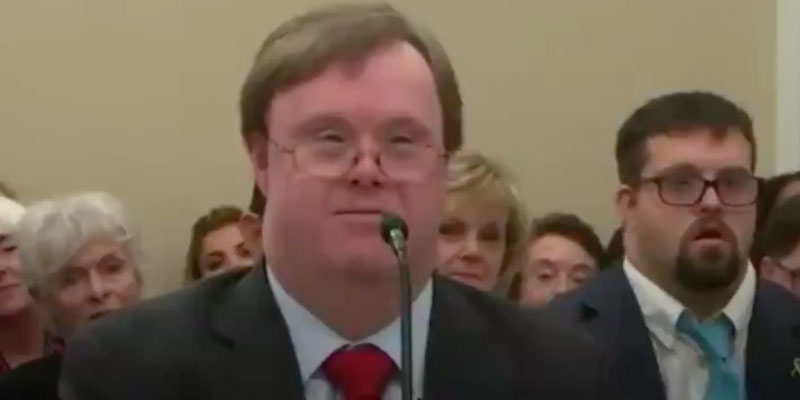 In Iceland, the vast majority of babies with Down syndrome are killed in utero. Using the same reasoning as Nazi Germany, apparently, Iceland sees this as social progress, presuming that those with genetic differences are incapable of loving, inspiring, or creating immeasurable joy.

As those with Down syndrome and other genetic disorders have proven time and again, this is clearly not true.

Related: The Loss of a Son Birthed an Adoption and a Ministry

Nevertheless, Iceland has apparently left it to society’s elite to decide who deserves to live or die, based on some subjective determination of human superiority. Such thinking led to the horrors of slavery and the holocaust, but humanists never learn from history, which they are bound and determined to repeat.

As reported in Breitbart News yesterday, Kari Stefansson is a geneticist and the founder a company that has studied Iceland’s population’s genomes stated, “My understanding is that we have basically eradicated, almost, Down syndrome from our society—that there is hardly ever a child with Down syndrome in Iceland anymore.”

In response, Patricia Heaton, of ABC’s The Middle cogently Tweeted: “Iceland isn’t actually eliminating Down syndrome. They’re just killing everybody that has it. Big difference.”

Frank Stephens, agrees, and he’s sickened by Iceland’s slective killing. Mr. Stephens, who has Down Syndrome, provided compelling testimony to a Congressional Committee on Capitol Hill last week, making a strong case for the sanctity of all human life. Realizing the obvious connection, Stephens told the committee that his life is “worth living.”

“Seriously, I don’t feel I should have to justify my existence. Is there really no place for us in the world?” Mr. Stephens said. “Surely happiness is worth something…Let’s be America, not Iceland or Denmark,” he added.

If anyone thinks this would never happen in America, Planned Parenthood and our country’s federal judges that are so sympathetic to their cause, are already doing their part to make sure it will.

When U.S. Vice President Mike Pence was Governor of Indiana, he signed a bill into law that that prohibited abortions based on the sex or race of the child or a prenatal diagnosis of “Down syndrome or any other disability.” The law also required that aborted babies bodies be disposed of in a dignified manner befitting human remains, instead of merely throwing them in the trash as abortion providers are known to do.

None of this sat well with America’s largest abortion mill, Planned Parenthood. Never hearing of an unborn child they didn’t want to kill in their insatiable quest to trade death for dollars, they teamed up with the ACLU to sue Indiana over this new law. A federal judge appointed by Barack Obama—U.S. District Court Judge Tanya Walton Pratt—promptly issued a permanent injunction against the law just last month. In other words, this judge says Indiana cannot stop a woman from killing her unborn child if she wants to do so because the child is female instead of male, or because the child’s skin is one color instead of another, or because the child has Down syndrome. This, says Judge Pratt, violates the Fourteenth Amendment.

In response to this ruling, President Trump said:

“Sadly, there remain too many people – both in the United States and throughout the world – that still see Down syndrome as an excuse to ignore or discard human life. This sentiment is and will always be tragically misguided. We must always be vigilant in defending and promoting the unique and special gifts of all citizens in need. We should not tolerate any discrimination against them, as all people have inherent dignity.”

“Whatever you learn today, please remember this,” Mr. Stephens passionately declared, “I am a man with Down syndrome, and my life is worth living.”

WATCH: “I am a man with Down syndrome and my life is worth living” said Down syndrome advocate Frank Stephens to lawmakers on Capitol Hill. pic.twitter.com/PYPcxFjbBw