WASHINGTON — In a rare moment of pushback against political correctness, the Pentagon announced it will not rename any military installations named after Confederate generals, including Alabama’s Fort Rucker.

“Every Army installation is named for a soldier who holds a place in our military history,” Brig. Gen. Malcolm B. Frost said in a statement. “Accordingly, these historic names represent individuals, not causes or ideologies. It should be noted that the naming occurred in the spirit of reconciliation, not division.”

Edmund Rucker was a colonel in the Confederate Army of Tennessee, commanding a cavalry brigade in the battles of Franklin and Nashville, during which he was wounded and captured. He was given the honorary rank of general after the Civil War and settled his family in Birmingham. He became a business leader in the late 1800s and one of the major players in the city’s rise to become an industrial powerhouse.

“Camp Rucker” was first opened in Alabama’s wiregrass region in 1942. The first troops to train at the camp were in the 81st Infantry Division, which saw action in the Pacific Theater during WWII. After shuttering for a few years during peacetime, the camp was reopened again during the Korean War. It was deactivated again briefly before reopening for good in 1955 as Fort Rucker. All of the Army’s aviation training has taken place at Fort Rucker since 1973.

Rucker was not the only base being pressured to change its name in recent weeks. As the Confederate Battle Flag became a hot-button political issue in the wake of a racially-motived shooting in South Carolina, activists pushed to eliminate remnants of Confederate history throughout the South.

“The services are ultimately responsible for naming their own military installations,” said Army Col. Steve Warren, a Pentagon spokesman. “As of now, there are no current plans to change policies regarding how installations are named.”

A map of the military installations named after Confederate officers can be found below. 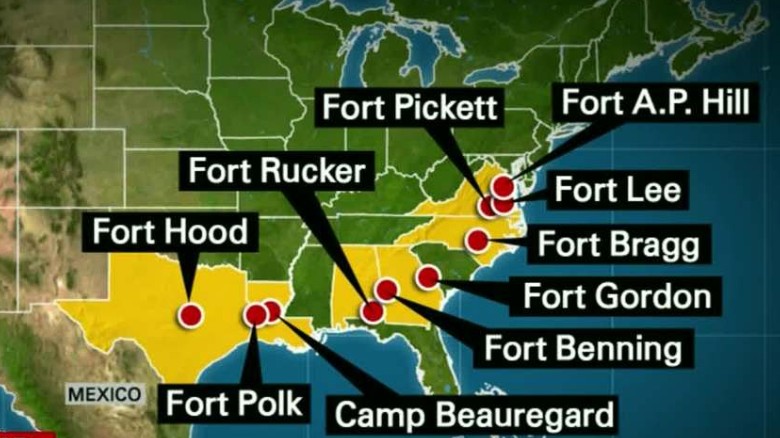