No difference in boys and girls? OK, so who made these Pinewood Derby cars? 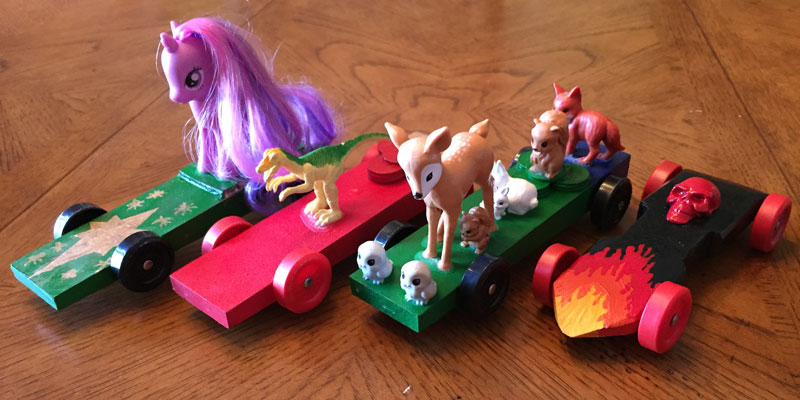 Our oldest son competed in his final Pinewood Derby last weekend before he bridges up from Cub Scouts to Boy Scouts this spring. After five years of trial and error, he finally built a fast car.

But the interesting part of this year’s race was the entrance of his siblings into the pack’s “outlaw” competition held so that other kids could join the fun.

And our experience added yet another piece of evidence to what has been obvious for millennia but has suddenly become politically incorrect — boys and girls are different.

A couple of weeks before the race I gathered our youngest four of five kids — two boys, two girls — and laid out the blocks of wood, the wheels, weights and paints before them. “You can make your car into whatever you want,” I said. “It’s all up to your imagination.”

The oldest boy, who is the scout, quickly decided upon a red human skull upon a black car. Oh, and the car had to be on fire, of course.

His little brother, 4, ran into his room and returned with a little plastic velociraptor. “Dino car,” he screamed. “Roar!” His chosen color? “Red, for the blood,” he explained, as if that was a silly question.

Our eight-year-old girl chose to adorn her green car with a pink My Little Pony doll accented by a large golden star. “Her cutie mark, Papa,” she said.

Her little sister, 6, dumped a handful of tiny plastic figurines onto the table. “All the beautiful aminals (sic), and we need green for the grass they eat and blue for the water they drink.”

After we finished building the cars together, each creation expressed their creators quite well, and gave this father of five example number 4,376 of how nature (read: God) created boys and girls to be so very different.

Yet we’re told daily that this self evident truth isn’t so, and that any distinctions we may observe are the artificial and imposed results of centuries of an oppressive, patriarchal society.

“The only difference between the genders are those made up in the human mind,” they once claimed. But that nonsense has since been replaced with an even deeper revelation — now gender itself is make believe.

The people making these claims are often childless, it seems, or with so few children that they don’t benefit from the deluge of examples that a parent with many children has the privilege to observe. One can read studies and observe temporary tests, but there’s nothing like the real life lessons that come with having complete responsibility for several boys and girls.

They have built-in differences. Period.

Our little family is no different. Our daughters are fascinated with my wife’s shoes and our sons are fascinated with my ever disappearing tools through no effort on our part to foist gendered interests upon them (For example, my wife is an athlete who grew up immersed in sports and says she considers herself more tomboy soccer mom than girly girl dance mom).

There are also many wonderful similarities between them. They all love playing music and have artistic talents.

There are often funny differences. Our oldest daughter is an animal loving vegetarian who’s routinely horrified at the sight of her little brother skinning beavers in the backyard or cooking squirrels in the frying pan.

And yes, they often break stereotypes. Our fiercest competitor? A daughter.

But in the aggregate, our boys are rough little boys and our girls are cute little girls.

With the Lord’s help they’ll grow to become men who’ll protect and provide for their families and women who care for and nurture their children.

And in that final, rather timeless arrangement we find the truth of it all.

God didn’t give us different instincts to divide men from women.

He made us lacking in certain instincts so that we can only become whole as husband and wife.

(J. Pepper Bryars is the editor of Yellowhammer News and the author of “American Warfighter.”)