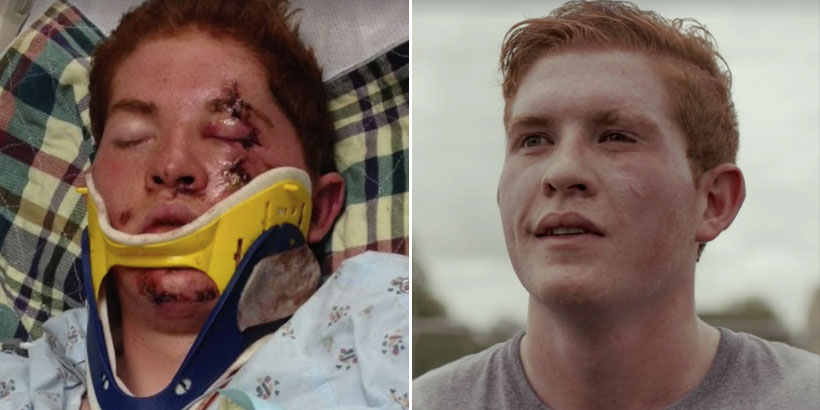 (Video above: The Brandon Gosselin story)

In the spring of 2013, Brandon Gosselin, then a high school senior from Burlington, Oklahoma, had the world at his fingertips.

He was valedictorian of his senior class; one of the top 10 basketball players in Oklahoma; an Academic all-state basketball player; and had just been accepted to the University of Oklahoma, which he called his “dream school.”

“You wouldn’t have thought I’d be able to do that because I grew up in a house that was one bedroom and there were six people living there,” Gosselin recalls. “I beat the odds, essentially.”

But less than two weeks after his graduation, his life changed forever.

He and his friends were camping out and riding four-wheelers together in the dark. Gosselin was driving about 55 miles per hour when a deer jumped out in front of him unexpectedly, causing him to crash.

“I landed directly on my face,” he said. “It almost looks like I lost my left eye. I’m just bleeding out of the left side of my face. (My friend) looked up at the other guys and said, ‘Guys, I think Brandon’s dead.’ I was put into a three-day drug-induced coma because I had swelling on my brain, I had a traumatic brain injury where a blood vessel had burst.”

The area of Gosselin’s brain that was damaged the most controls cognitive capacity, learning capabilities and memory.

“Pretty much everything we use to function in day to day life,” he explained. “I had the mental capacity of a third grader.”

But rather than allowing his injuries to hold him back, he pressed forward.

“I’m not going to let my circumstances keep me from achieving my goals,” he remembers thinking, “no matter what anyone else says… There’s something inside of me that tells me not to give up.”

He gets into a routine.

He got back into school, but struggled with his memory. At the end of his first semester back, he was on the verge of failing out of college and considered giving up. He doubled down on his rehab and within a year had clawed his way back to full mental capacity.

Gosselin’s GPA skyrocketed to 4.0, but he still wanted more.

“I’m feeling called to do something beyond myself.”

He felt like God was calling him to transfer to a private Christian school in eastern Tennessee, Freed-Hardeman University.

“Ok, God. If it’s where you want me, that’s where I’ll go,” he recalls thinking. He immersed himself in the school, his faith and Christian mission work.

“This is why I survived,” he says.

Today, thanks to God’s grace and some hard work, Gosselin is on track to achieve more in his life than he ever imagined he could, but but none of it would have been possible without a scholarship provided by an Alabama non-profit called the Jimmy Rane Foundation.

The organization was founded in 2000 by Jimmy Rane, the CEO of Great Southern Wood Preserving who’s commonly referred to as “The Yella Fella,” thanks to his viral Yellawood TV commercials. The foundation has given out millions of dollars in college scholarships to over 300 students, thanks to the generous support of donors who includes a who’s who of Alabama sports icons and business leaders.

This past weekend, a new crop of students received scholarships at a star-studded gala in Montgomery that included a keynote speech by NFL legend Peyton Manning.

And Brandon Gosselin was back, two years after receiving his own scholarship, to thank the people who made it possible.

“Since receiving the Jimmy Rane Foundation scholarship, my world has expanded,” he said. “Shattered hopes and dreams are mine again… I’m on track to be the first person in my family to graduate with a four-year college degree.

“What I found is that I’m able to go beyond what my doctors thought I could do, what my family and friends ever dreamed I would do, all because of what we read in Philippians 4:13,” he concluded. “‘I can do all things through Christ who strengthens me.’ The glory goes to God, and the heartfelt thanks goes to the Jimmy Rane Foundation.”