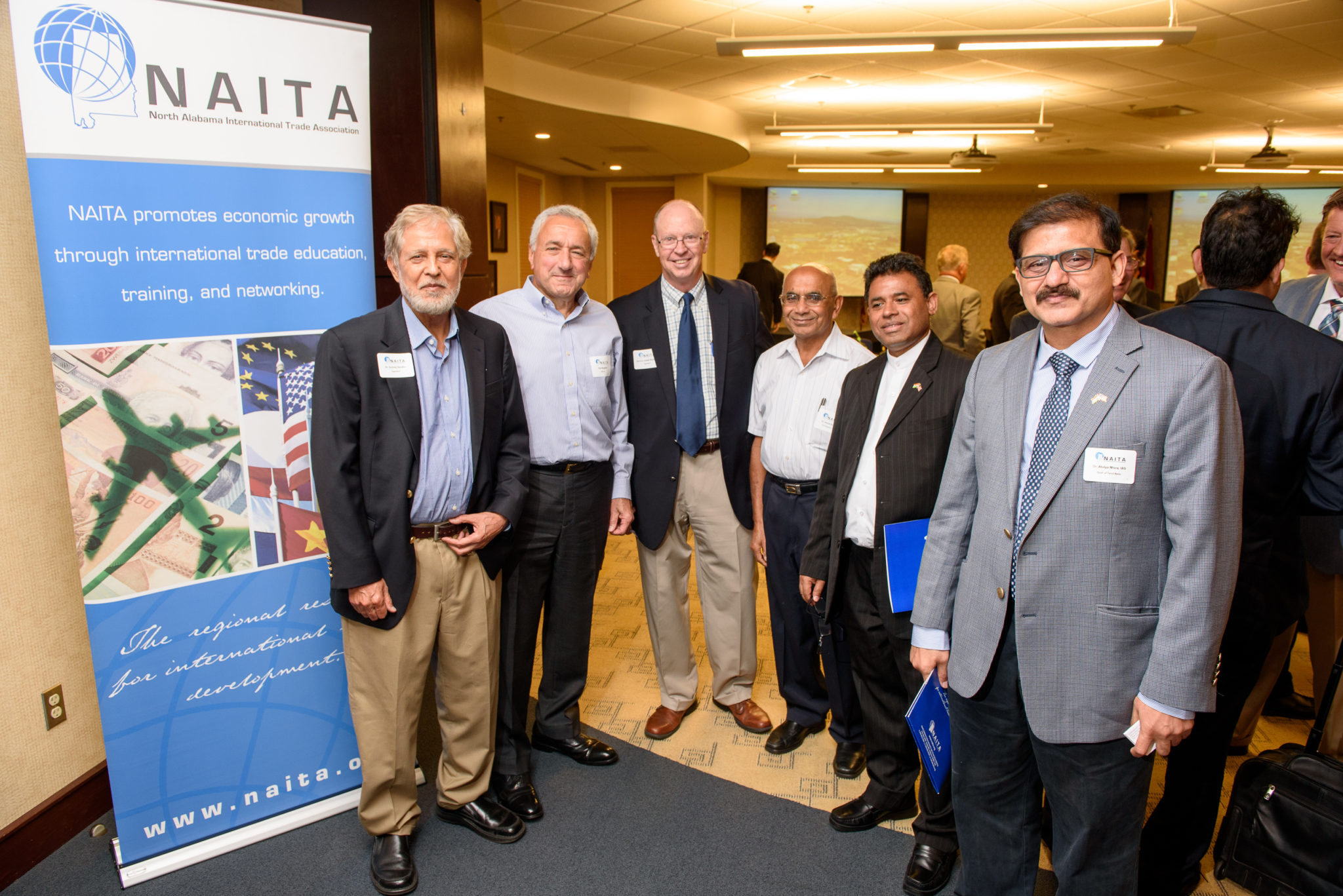 An aerospace trade delegation from India visited Huntsville over the past two days on a trade mission that may ultimately produce hundreds of new jobs and meaningful economic development in Alabama’s Tennessee Valley. Through a number of meetings with area business and governmental leaders, the delegation had the opportunity to demonstrate capabilities, needs, and explore trade opportunities with companies like Boeing and L3 Technologies.

Huntsville was the delegation’s final stop on a multiple-city tour that included Seattle, San Francisco, and Jacksonville. The group was comprised of government leaders and aerospace industry executives who were impressed what they saw in in North Alabama. Multiple presentations were made by various members of the Indian delegation regarding aerospace projects, both civil and governmental, and opportunities for Alabama companies to supply parts.

“We were delighted to host this 18-member delegation,” Burkett said. “We began the day with a briefing at the Chamber, which highlighted our region’s prolific aerospace industry. The group also visited the Propulsion Research Center at UAH, as well as the University’s Center for Applied Optics along its many stops of the day, which I believe demonstrated how effectively we can serve new aerospace businesses here,” Burkett concluded.

India’s delegation was led by Atulya Misra, Secretary of Industry for the government of Tamil Nadu—India’s sixth most populous state. Accompanying Mr. Misra was India’s Deputy Consul General D. V. Singh and many others who are integral to investments in the U.S. economy.

Today’s event in Huntsville reflects a policy change in which India is shifting its focus away from a nation-to-nation trade strategy in favor region-to-region trade strategy.  Yellowhammer asked Mr. Misra about this shift, and he said:

While the idea has been in place for some time, it’s only recently that it has become visible. Today, many Indian companies have reached the critical levels of success needed to put this strategy into effect, so we can directly facilitate partnerships. We now have a tremendous capacity with numerous companies represented by experienced entrepreneurs who possess the capital and the skills needed to make successful investments in the U.S. in forward-thinking cities like Huntsville.

When asked about his overall impressions of Huntsville, Misra replied:

Huntsville fits well into our delegation plans. There are many impressive things about its aerospace industry. One of the most impressive, however, is the relationship the industry has with UAH. This demonstrates the area’s commitment to supporting its industry with excellent training. Also, we have an aerospace park in the city of Chennai, which is in my state of Tamil Nadu. Like Huntsville, we have an advanced technical university there. Seeing the effectiveness of this partnership here in Alabama between the aerospace industry and the university has inspired us to create the same kind of partnership in Chennai.

The success of this visit didn’t happen in a vacuum. Alabama’s Senate Majority Leader Greg Reed, Senator Bill Holtzclaw, and several Alabama business leaders have been laying the groundwork for this visit through their strong relationship with India’s Consul General, Nagesh Singh.

Senator Reed and others hosted the Consul General and his team this spring in Montgomery, and that meeting sowed the seeds for the visit from the Indian delegation. When asked about that trip, Reed told Yellowhammer,

“This spring, I had the opportunity to arrange meetings between Alabama legislators and representatives from the Indian government, including Consul General Nagesh Singh. We had a series of productive discussions on how Alabama and India could become closer economic trading partners. I welcome the news that representatives from Consul General Singh’s office visited Huntsville today. Alabama’s aerospace, manufacturing, and technology companies are cutting-edge, and we have a strong workforce and a business-friendly economic climate. I will continue to work with Governor Ivey and business leaders across our state to cement the partnership between Alabama and India, which has the fastest-growing major economy in the world. A strong partnership with India can lead to more jobs for Alabama workers and additional markets for products made in Alabama,” Reed concluded.

Senator Bill Holtzclaw (R-Huntsville) also collaborated in bringing the delegation to the Rocket City. “This I know, we share a common goal, which is prosperity for our families and our communities. We will achieve that shared goal through working together,” Holtzclaw shared as he welcomed the group.

Senator Holtzclaw went on to tell Yellowhammer that his time in the Marine Corps helped shaped his worldview, giving him an abiding appreciation for the business acumen and the rich culture India has brought to their already robust community in North Alabama, and he hopes that community will soon grow.

“My office is open to support them,” Holtzclaw said. “They represent a tremendous opportunity for North Alabama, and I look forward to a visit from Consulate General Singh in October and seeing the exciting developments that come from today’s visit from the delegation.”