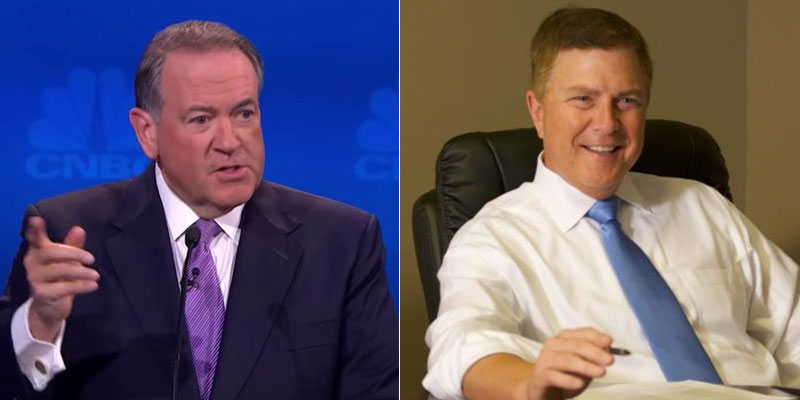 Mike Huckabee was on the Rick & Bubba Show this morning to talk about his new TV show that debuts on TBN this Saturday. The former Governor of Arkansas also spoke to the often-inaccurate assumption that many make about how a pastor’s skills transfer into public service. As part of that discussion, Huckabee joined the popular hosts Rick Burgess and Bill ‘Bubba’ Bussey in endorsing Scott Dawson for Governor of Alabama.

As Huckabee told Rick, Bubba, and their audience of well over a million listeners, “I think people who’ve worked in ministry are better qualified than anyone to go into public service when they’re called to do so. People often forget when you’ve worked in ministry that you have first-hand, life experience…with virtually every social pathology and challenge that exists. Whether it’s drug addiction, divorce, caring for elderly parents, people who’ve committed crimes, or those who have been victims of crimes, you know the best and the worst about people in every situation. Folks tend to say [pastors] don’t know what’s going on in the world, but I’d suggest just the opposite—they know a whole lot more than most people. A minister also has administrative talents, understanding, and life experience that’s very hard to duplicate,” and that equips them for an executive role like Governor, Huckabee said, including being a good steward of the resources entrusted to them.

With that common thread, Huckabee gave his wholehearted endorsement to Dawson, voicing his personal admiration for how the Alabama minister “brings the right heart to the job.”

“You guys have been through a pretty rough political period. People need healing. I took the job as governor of Arkansas under similar circumstances,” Huckabee explained. “People are bruised, this is an embarrassment,” and Scott Dawson is a guy who will bring a “healing role” to the state of Alabama. “I’m thrilled you guys are behind him,” Huckabee said to Rick and Bubba, and “I’m very honored to be behind him as well.”

Speaking to Yellowhammer about the importance of Huckabee’s endorsement of Dawson, Rick Burgess said:

Scott Dawson and Mike Huckabee are walking the same path. Mike was a minister that felt called to bring stability to a state, just like Scott Dawson. I admire men who have a sound Biblical worldview and are smart enough to see the many ways that applies to how one governs wisely, as has been the case with great leaders throughout American history. Mike and Scott share that Christian worldview and that wisdom, so I think this is a great endorsement for Scott, because Mike’s been there. I don’t think anyone should venture into the political arena unless they’re 100% certain this is what God is calling them to do. Just like Mike Huckabee, Scott Dawson felt that call and in response, he ‘put his yes on the table,’ so we’re all excited to see what God does with Scott’s willingness to serve.”

You know Mike Huckabee won the Alabama presidential primary back in 2008 and he’s been highly respected in this state since. That’s one reason it’s a huge honor that he endorsed Scott. As Rick said, they have a very similar background…Mike was a minister who became governor of Arkansas at a time their state needed to restore public trust, and hopefully, Scott Dawson will become governor of Alabama at a time our state needs the same.

Also, like Mike said on our show today, when you’re in the ministry you feel a tremendous sense of responsibility to wisely spend the money donated to your cause. That responsibility translates into how a governor will spend taxpayer dollars. Unlike many politicians who view tax revenue as money belonging to the state, Scott Dawson will always see it as money that belongs to the people, and the governor is just a steward of those resources. That’s a critical aspect of how he views the world as a minister and that’s a huge win for the people of Alabama because they’ll get a governor who will give them the most bang for the buck while holding to the highest ethical standard as he does so.

When Yellowhammer asked Dawson about Huckabee’s endorsement, he expressed his appreciation, stating:

Governor Huckabee’s endorsement this morning gives me great confidence because he has walked this path. His ministry experience coupled with his governing success in the state of Arkansas is comforting and energizing. It’s comforting because I know I’m following God’s will for my life, just as I know he did. It’s energizing because each day I will work as hard as humanly possible to effectively serve the people of Alabama as governor and to restore the dignity to the office that they deserve. The people of Alabama have had their fill of a government being ‘of the politicians, by the politicians, and for the politicians.’ They deserve a state government that is ‘of the people, by the people and for the people,’ and if they entrust me with this high calling, I will most certainly bring that to bear in Alabama.