Chief Justice Roy Moore is in the Lions’ Den (opinion) 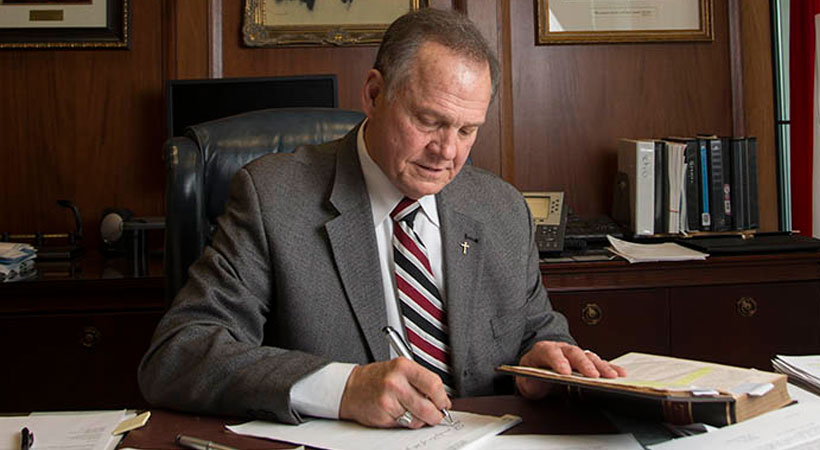 As a child, I, like many of you, learned the biblical story of Daniel, a man who was thrown into a den of lions because of his devout faith but found himself shielded by God’s grace and His angels of protection.

It struck me that Alabama today has its own version of Daniel in the form of Chief Justice Roy Moore, a man whose critics wish to figuratively rip his flesh from bone because of his deeply held beliefs and one who I believe will find similar assurance from his Maker.

Moore was recently suspended from his judicial position by a Star Chamber court of cultural elites who disagree with his actions following rulings by the U.S. Supreme Court in the Obergefell vs. Hodge gay marriage case and by a federal judge in a similar suit in southwest Alabama.

When the opinions overturning bans on gay marriage were released, Moore instructed probate judges in the state to refrain from issuing licenses to same sex couples until it could be solidly determined whether the rulings applied only to the affected counties in southwest Alabama and the four states cited in Obergefell or whether they had a blanket effect.

The Southern Poverty Law Center, an ultra-leftist group of extremists whose agenda seeks to purge religion, morals, and values from every facet of our society, filed a judicial complaint as a result. Moore will remain suspended as chief justice until a hearing determines whether he is exonerated, fined, removed from office, or otherwise punished.

It has become obvious that Moore is merely the latest target of the culture warriors working to abolish traditional marriage, allow so-called “transgender” crossdressers to shower and dress with the opposite sex, and praise perversions rather than condemn them.

Some of the top legal experts in the state believe that the Judicial Inquiry Commission, which voted to suspend Moore, has acted outside of its jurisdiction, and they note that Moore was not a named party in any of the involved cases, and, thus, cannot be accused of violating a court order.

If this unwarranted attack on Moore is successful, it will open the door for the politically correct Gestapo to punish any judge whose opinions do not rigidly conform to their dangerous social demands.

But the bigger picture of how this culture war affects the religious freedoms of everyday Christians like me is foremost in my mind. The liberal mainstream media would have you believe that devout followers of Christ are responsible for attacking various “protected” minorities when, in fact, we are the ones under attack.

As the Bible instructs us in Ezekiel 3: 16-19, God has called us to be watchmen tasked with warning those who are lost and who have strayed, but if we refuse to sound the alarm or stand in the gap , the blood of the lost is on our hands, and we will be judged accordingly. Moore is simply doing what all Christians should be doing, but the cultural elites bludgeon anyone who speaks out or stands up for decency and devotion.

I ran for the Alabama House to ensure that our state’s public policy decisions, laws, and legislation included Godly principles, good morals, and Christian values. I am sure that the same leftists targeting Moore will denounce me for those words, but I, too, refuse to remain silent.

Just like Daniel, Moore faces what most would consider to be an insurmountable threat, but with our continuing prayers and unwavering support, he can escape the danger that surrounds him. Faith like Moore’s should not be punished – it should be praised and honored and emulated.

Christians can win the culture war that rages in our nation, but we must each be willing to join the battle, no matter what the costs. Are you ready to fight?

State Rep. Rich Wingo, a businessman, represents District 62, which encompasses portions of Tuscaloosa County, in the Alabama House of Representatives.