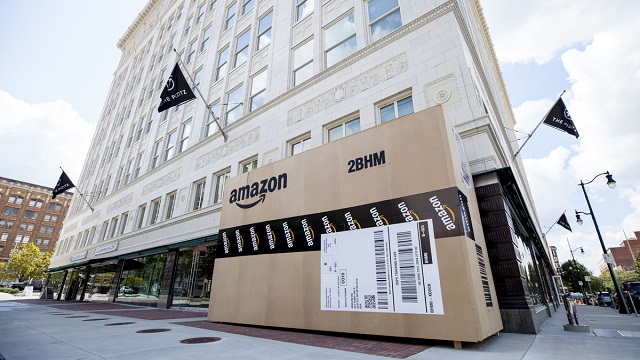 Amazon announced this week that it has received 238 proposals from 54 states, provinces, territories, and districts across North America for its next headquarters. The tech giant is expected to directly invest $5 billion in the project and create 50,000 high paying jobs. The project is also likely to create tens of thousands of additional jobs and tens of billions in additional investment in the surrounding community.

Birmingham is one of the many cities vying for Amazon’s attention. The city began a campaign called “Bring Amazon to Birmingham” (or “BringAtoB”) to create a buzz surrounding the new HQ2. City leaders erected large Amazon boxes and placed them at major locations around the city. They also encouraged Birmingham residents to create a social media buzz by using the hashtag #BringAtoB.

The city has even created a Twitter account Bring A to B that relentlessly posts hints aimed toward Amazon about moving to the Magic City.

Being so close to the Gulf means we have a steady supply of fresh Alabama Seafood. Want some, Amazon? #bringatob

Hey Amazon, Grammy award winner Jason Isbell was raised in this great state. Your children could be too. #bringatob

Amazon: the Space Needle sets a pretty high bar, but we have the largest cast iron statue in the world, so. #bringatob

Amazon is looking for locations with strong talent, especially in software development. Birmingham has seen rapid growth in its tech sector, as evidenced by local tech companies such as Shipt, and could provide the skilled workforce that Amazon is looking for.

Amazon has said that they chose a public forum for the selection process because they want to find a city that is excited to work with them. Birmingham is pulling out all of the stops to prove they are the best location for HQ2. Will Amazon make the move to the Magic City? We’ll have to wait to see!