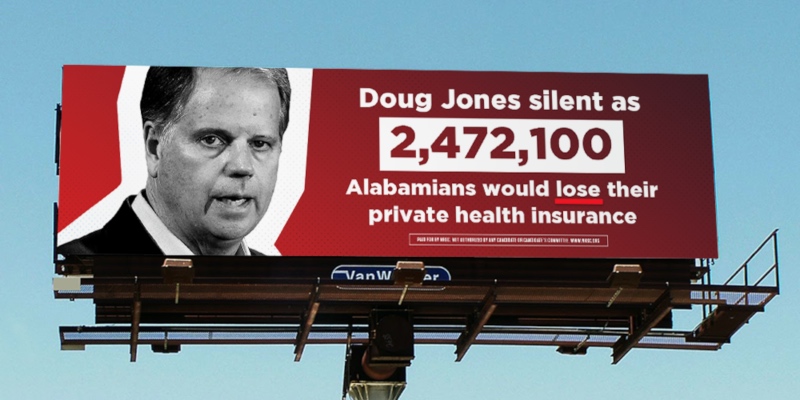 Alabama’s 2020 U.S. Senate election is off and running.

On Monday, the National Republican Senatorial Committee (NRSC) put up the first billboard in the Yellowhammer State during this important cycle, as they look to oust the incumbent from Mountain Brook, Sen. Doug Jones (D-AL).

The billboard can be found in Birmingham along I-59, near Roebuck Plaza where the interstate crosses over Highway 11.

It reads, “Doug Jones silent as 2,472,100 Alabamians would lose their private health insurance.”

This builds off of Jones’ blanket pledge to support the Democrats’ 2020 presidential nominee, despite many of the candidates embracing far-left policies like Medicare for All and the Green New Deal. The billboard specifically references Sen. Bernie Sanders’ (I-VT) plan that would end private health insurance for 2,472,100 Alabamians.

“Doug Jones will not get a pass from voters as he has pledged to support socialist candidates for president who would eliminate private health insurance for 2,472,100 Alabamians,” NRSC spokesperson Nathan Brand told Yellowhammer News. “Alabama voters will retire Doug Jones because they know he has consistently opposed President Trump and his agenda when it matters most.”