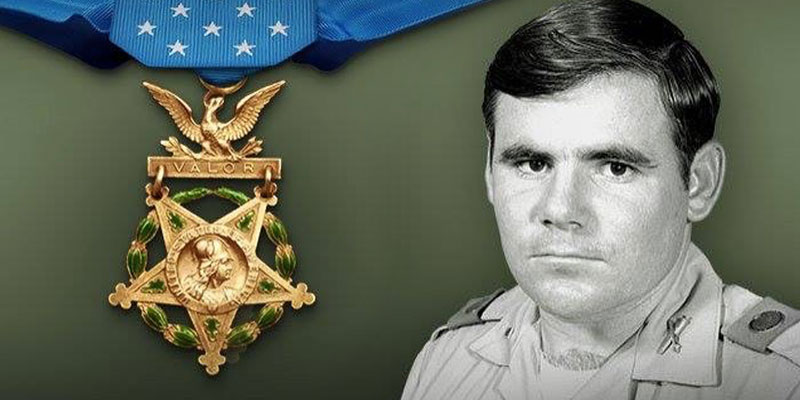 A resident of Huntsville, Captain Rose was cited for “conspicuous gallantry and intrepidity” in his service as an airborne medic during Operation Tailwind in September 1970 and is credited with saving the lives of over 60 of his fellow soldiers.

“Through selfless acts of heroism, Captain Rose has embodied the highest ideals of our state and the United States of America,” said Alabama Senator Luther. Strange. “It was my utmost privilege to recommend Captain Rose to the President, and I am humbled to represent Alabama’s men and women serving the nation in uniform who strive to live up to his example.”

On the days of Sept 11-14 1970, then-Sgt. Gary M. Rose was serving as a medic with MAC-V-SOG while conducting operations deep into Laos. Once on the ground, Rose and his company sized force moved into enemy territory, soon making contact with a large force of NVA; sparking off a 4 day battle.

During the attack on Day 1, one of the Montagnards was wounded, Rose ran towards his wounded man, shielding the soldier with his own body as he rendered lifesaving medical treatment. Rose then dragged the wounded back to the company with one hand while holding back and engaging the enemy with his weapon in the other hand. As the fire intensified, the team moved from position to position with the help of air support.

Rose received many severe wounds on Day 2 of the mission, but those did not slow his determination to save lives. While rescuing another wounded Soldier, an RPG landed nearby, spraying Rose with shrapnel in his back, leg, and severely crippling his foot. Using a stick as a crutch, as he would for the remainder of the mission, Rose continued to treat the wounded while ignoring his own painful wounds.

On Day 3, the besieged team called a Medivac, but choppers were unable to land.

On Day 4, over 500 NVA were moving on their position. They were ordered towards an LZ and began setting a perimeter. As helos began to extract the teams, Rose boarded the final helo while delivering accurate fire on the enemy as he loaded up. Shortly after lifted off, the helo was shot down at about 4,500 feet in the air. As they were crashing, Rose rushed to aid the door gunner who was shot in the neck, rendering lifesaving medical treatment that saved the Marine’s life before the helicopter hit the ground. Rose was thrown from the helicopter before the point of impact. Surviving the landing, Rose crawled back into the downed helicopter to pull his wounded and unconscious teammates from the wreckage, knowing it could explode at any moment. Rose continued to administer medical treatment to the wounded until another helicopter arrived on the scene to extract the men.

Despite the many wounded, only 3 men died during the 4 day battle deep in enemy territory. Rose is credited with treating 60-70 wounded personnel and saving many lives. On Monday afternoon, Oct 23rd, 2017, Pres. Trump will award the Medal of Honor to now-Capt. Rose for his actions on those days. #hero #moh