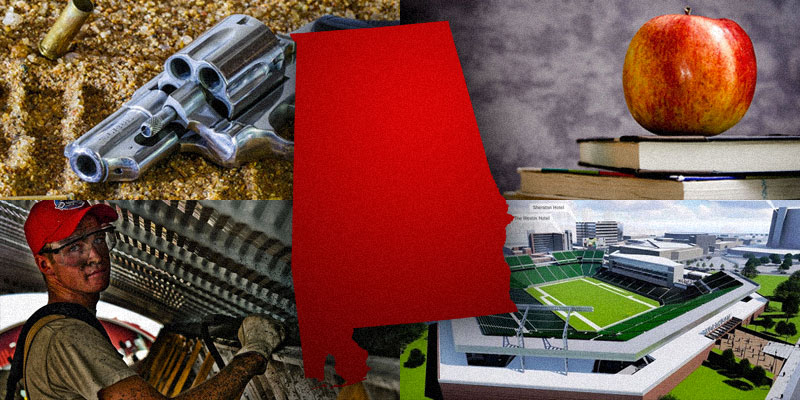 The countdown is on! What’s happening as the session winds down? Read below to find out!

With time quickly winding down in the legislative session, the House Public Safety and Homeland Security Committee had a meeting scheduled on Tuesday to consider several things: a bill that raises the age to by an AR-15 from 18 to 21, a bill that would allow judges to take firearms away from individuals who might use them for self-harm or harm to others, and a bill that would ban the sale of AR-15s and other similar guns. The meeting was canceled due to lack of participation—only 4 of the 11 representatives on the committee showed up for the meeting. Additionally, the house, on Tuesday, left without debating Representative Will Ainsworth’s (R-Guntersville) bill to arm teachers. With the session expected to end next week and with no action on the bills this week, it appears that time has run out for these bills this session. Speaker Mac McCutcheon (R-Monrovia) has said that Ainsworth’s bill will come up again next session, while Ainsworth has called on Governor Ivey to call a special session to consider school safety proposals.

2. But school safety still looks to be a priority of the legislature.

Just because the legislature isn’t making a decision about arming teachers this session does not mean that they are not concerned with school safety. A bill before the legislature would allow school districts to take money from the Advancement and Technology fund. According to Representative Bill Poole (R-Tuscaloosa), “If [the school systems] have some security needs, whether those are security cameras or improving door lock systems or alert systems or whatever the case may be, the local districts will have the flexibility to point these resources to those specific needs.” The bill previously passed the Senate, passed the house this week, and now heads back to the Senate for a conference committee or concurrence vote.

3. A bill that would bring an ethics law change for economic developers is still moving, but maybe not for long.

Remember the controversial ethics bill that the House passed by a large margin during week 9 of the legislative session? As a reminder, this bill would allow economic developers to be exempt from the rules that lobbyists are subject to, which includes registration as a lobbyist,  annual training, and reporting of activities. Earlier week, the bill was passed by the Senate Fiscal Responsibility and Economic Development Committee. On Thursday, Senator Dick Brewbaker (R-Montgomery) told reporter Chip Brownlee that there are a handful of senators ready to filibuster the bill in its current form. Brian Lyman reported that there may be a substitute in the works, which would be brought up on Tuesday.

4. BJCC expansion is one step closer to becoming a reality.

You might remember hearing about a proposal to renovate and grow the Birmingham-Jefferson Convention Complex by adding a stadium. Well, in order to fund that project, there is a bill currently before the legislature that imposes a 3% tax on car rentals and leases in Jefferson County. According to Barnett Wright with The Birmingham Times, “The rental tax is expected to generate about $3.5 million a year to help pay the debt service on the project, which the BJCC Authority estimates will be about $21.5 million a year.” The bill, sponsored by Senator Jabo Waggoner (R-Vestavia Hills) and Representative Jack Williams (R-Vestavia Hills), has passed both chambers and heads to Governor Ivey for a signature.

—  Governor Ivey signed a few things into law this week, including…

—  A bill that would allow death row inmates a third option for execution—nitrogen hypoxia.

—  A contract with Wexford Health to handle the medical and mental health care at Alabama’s prisons. If you remember, the legislature held up the signing of this contract several weeks ago.

—  A tax break for low-income and middle-income individuals and families in Alabama.

—   Senator Bill Hightower’s (R-Mobile) bill to allow Alabamians to vote on whether or not they want legislators to be term-limited did not pass in the Senate this week.

—   Alabama is one of only two states that does not have a law mandating equal pay for men and women. A bill by Representative Adeline Clark (D-Mobile) would change that, but since it did not get a committee vote this week, it is unlikely to pass.

—   The legislature has approved a bill that will allow UAB to create the Rural Hospital Resource Center, a facility that will be able to provide assistance to Alabama’s rural hospitals.

—   In November, voters will get to decide on a constitutional amendment that will allow the display of the ten commandments on public property, including schools.

—   After the threat of a filibuster, the stand-your-ground-in-church bill, which was up for debate in the Senate this week, has been stalled.

—   The Alabama Rural Broadband Act, a proposal that would offer grants to companies that will bring broadband internet to Alabama’s rural areas, has passed the legislature and is waiting for the governor’s signature.