In short, the RSA is short for current and future retirees by $15.2 billion.

“This means that for every dollar that the pension system owes current and future retirees,” the study says, “it currently has only 66 cents.”

According to the paper, between 2003 and 2013 (the most recent years for which public data was available) the unfunded liability for the RSA grew from a manageable $2.1 billion to the $15.2 billion it is today—putting each of Alabama’s 4.8 million residents on the hook for $3,166, or $8,724 per household.

“This massive $13.1 billion increase in RSA’s unfunded liability equates to an increase of over $1.3 billion per year, $109 million each month, or nearly $4 million for each day that elected officials did nothing to fix this problem,” the paper detailed. “For a bit of perspective, the total current debt outstanding for the entire State of Alabama (every public school building,every public college or university, every road or bridge, every economic incentive, the Port Authority, Mental Health, the Revolving Loan Fund, the Tobacco bonds, all of the state’s general obligation and revenue bonds) is only about $8.8 billion or $4,786 per household.”

This year alone, the state must send nearly $1 billion to the RSA, or 12 percent of the education and general fund budgets combined, making retirement systems contributions the second largest budget item after education. 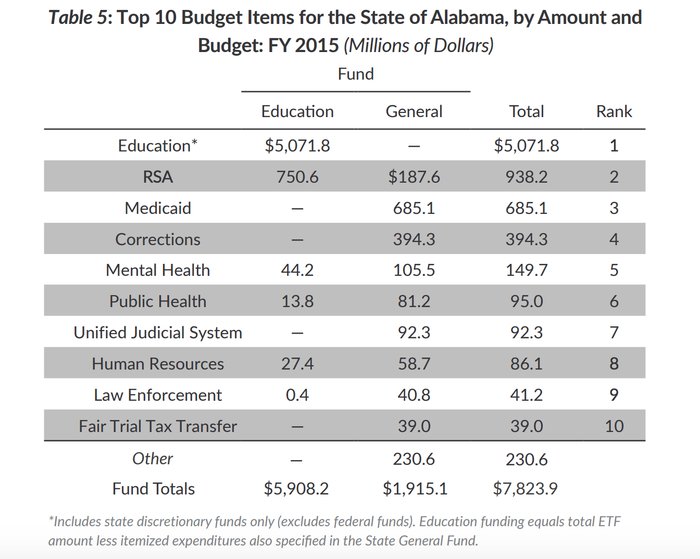 The paper says that the pension reforms passed in the last several years made steps in the right direction, but did not address the fundamental issue causing the shortfall—overly optimistic returns on investment.

“The Legislature made some helpful changes to the state’s pension system a few years ago, but many of them knew that these were just ‘fixes’ and that their work wasn’t done,” API Vice President Katherine Robertson told Yellowhammer Tuesday. “Since that time, we’ve had so many conversations with legislators who are ready to take the next steps toward structural reform and have sought our input.”

“We recognize the burden that pension obligations place on our state government (and ultimately, the taxpayers) and believe that at a time where “everything is on the table,” pension reform should certainly be considered.”

Another issue the study points out is that administrators and lobbyists of the private Alabama Education Association were made eligible to receive the same pension as the state’s teachers and education staff, which is highly unusual.

Moving forward the study says the state should adopt a “Cash Balance Pension Plan,” similar to a 401k, while still making payments toward the current unfunded liability.

The study also recommends making changes to the Judicial Retirement Fund, which was left out of the last round of reforms. “In the State of Alabama,” the paper points out, “a person could not save a single dime for retirement, be appointed as a probate judge at age 60 (a position that doesn’t even require a law degree), serve for only 10 years until age 70 and receive a full pension (75% of salary) that would have taken a ‘regular’ state employee over 45 years to reach.”

While the paper shows how dire the situation is, it gives some hope in the conclusion, offering policy prescriptions to address the problems. Of all the crises being faced by the State Legislature, the paper makes a strong case for making tackling this issue a priority.

The entire, 39-page report can be read here.