An academic report released Tuesday by one of Alabama’s preeminent economists outlines a litany of positive news for the state’s coal industry.

Dr. M. Keivan Deravi, Ph. D., of Economic Research Services Inc. performed a quantitative economic impact study on behalf of the Alabama Coal Association. He is renowned for developing the Alabama Economic Forecasting Model and the Alabama input/output model, used for 35 years by the state’s elected officials to generate state budgets. Deravi is a retired professor of economics at Auburn University Montgomery.

The newly released report illustrated that metallurgical (met) coal, the valuable type of coal used to make steel and not involved in electricity generation, is primarily what drives Alabama’s robust coal industry. Met coal, exported around the world to various steel mills, accounts for 82% (11 million short tons in 2018) of the coal mined in Alabama, and this segment of the mining industry is on track to keep growing.

“Alabama is blessed with abundant natural resources,” Patrick Cagle, president of the Alabama Coal Association, commented in a press release.

Besides the bright future forecast, the report detailed the tremendous impact the coal industry is having on Alabama families today.

This includes a huge jobs impact, both through coal industry employees and direct suppliers. Plus, these jobs are not what many people perceive the industry as — Alabama’s coal jobs are high-tech, high-skill and high-paying.

“Currently, the coal industry in Alabama directly employs more than 3,000 people and generates $370 million in annual payroll, for an average salary of more than $100,000 a year,” Deravi explained in a statement. “Coal jobs are among the highest-paid positions in the state, around 1.6 times the average annual salary for workers in Alabama. The industry also generates approximately $69 million in taxes for the state.”

Moreover, the study examined the direct, indirect and induced effects of each coal job on local economies. The direct effect is the economic impact of the regular operation of a company. Indirect effects include impacts on suppliers, vendors or associated materials industries. Induced effects result from positive changes to an economy that happen when a worker’s spending enhances a local economy.

Using those stated multipliers, the study found that Alabama’s coal mining industry has a total output impact of $2.9 billion, a total earnings impact of $1.2 billion and a total economic impact of 15,000 full-time-equivalent jobs.

The report detailed that besides mining and suppliers, the largest employment beneficiaries of the coal industry are the service sector, transportation sector, manufacturing sector, finance sector and wholesale and retail trade. 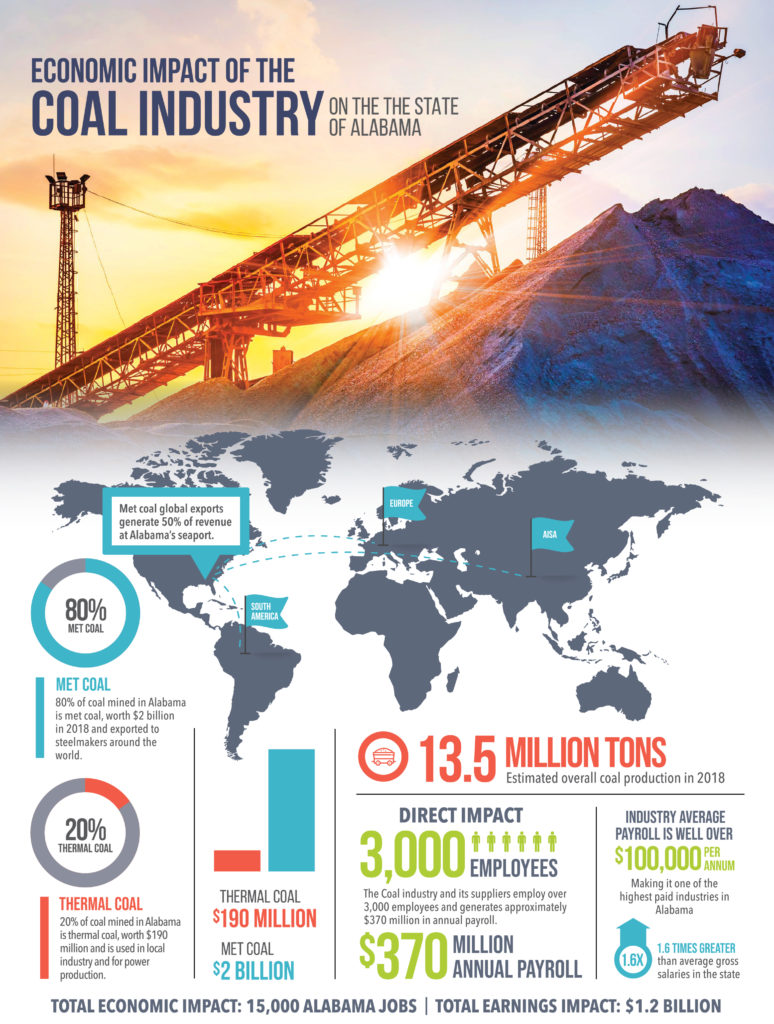 “From the high-quality met coal we ship to steelmakers around the globe to thermal coal that fuels local manufacturers and power production, the coal industry continues to responsibly use our resources to create high-paying jobs, strengthen our economy and build better lives for hardworking Alabama families,” Cagle said. “We are pleased this report objectively quantified through real data the positive things we see every day in our business.”

According to Deravi’s model, the coal industry is estimated to have generated a total of $69 million in income, sales, use and utility taxes for the State of Alabama’s coffers in addition to $5 million in coal severance taxes in 2018.

Alabama Senate Majority Leader Greg Reed (R-Jasper), who represents parts of Alabama where most of its coal is located (Walker, Winston, Fayette, Tuscaloosa and Jefferson Counties), advised the state has a “long historical tradition of being blessed with hard-working coal miners.” Reed proudly calls himself “the coal senator.”

“Today, these miners are making high wages – starting at an average of around $85,000 a year – to support their families, which in turn helps boost local economies,” Reed stated. “The coal industry fuels the growth of many suppliers and vendors and is pouring revenue into state budgets to help provide roads, bridges, schools and first responders.”

Additionally, the report highlighted something that Yellowhammer News has reported on extensively in the recent past: the majority of met coal mined in Alabama is shipped around the world to customers in South America, Europe and Asia, thus majorly driving economic activity at the Port of Mobile. In fact, the McDuffie Coal Terminal generates approximately 50% of the total annual revenue earned by the Alabama State Port Authority. In 2018, the Mobile seaport ranked fourth in the nation for shipping coal exports, and with sunny days forecasted ahead for the state’s met coal industry, this boon should continue.