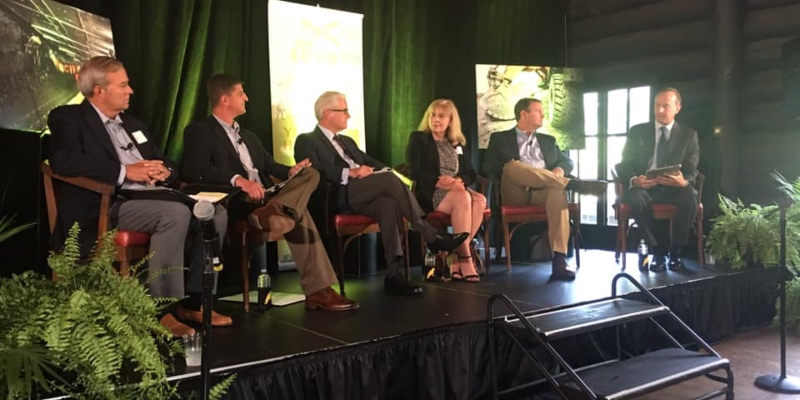 JASPER — Yellowhammer News on Thursday held the fourth of its 2019 News Shapers events: “West Alabama and the coal industry.”

Hosted at Musgrove Country Club, top stakeholders from industry, government and academia came together to discuss the coal industry’s impact on Alabama.

Areas of focus included analysis on the past, present and future of the industry, highlighting the industry’s state and regional impacts, related workforce development efforts and community influence.

‘For me to represent those folks — it’s important’

Reed was the first panelist to speak and kicked things off by emphasizing how much the coal industry has meant to West Alabama historically — and how that special importance remains today.

He said the impressive standing room only crowd, which included a bevy of state legislators, local elected officials and representatives from various state agencies, was a tribute to the continuing impact coal has throughout the Yellowhammer State.

“Some of you have heard me say this before, but I pride myself on saying that I’m ‘the coal senator.’ And it’s because I represent Walker, Winston, Fayette, Tuscaloosa and Jefferson Counties,” Reed said. “If you look at the numbers, those are the top coal-producing counties in the state of Alabama.”

“But you go a long way back — I’m 54 years old and I grew up in Cordova, Alabama, down on the Warrior River in south Walker County,” he continued. “And just about everybody was involved in some way with the coal industry… It’s just a fiber of who I am. My wife Mitsy is with me tonight. Her grandfather was a coal miner. Her daddy was a coal miner. Both my grandfathers were retired coal miners. So, the roots run deep in this community in regards to the significance of coal.”

“And the reality is God put something in the ground, and he gave men and women the intellect to know how to extract it, be able to then use it to produce all kinds of fantastic things that are so important to our lives. So, there is a certain sense of pride in knowing that’s who you are and what you do. For me to represent those folks — it’s important.”

Reed then said while Alabama’s coal industry has experienced “ups and downs,” the present state of affairs looks relatively good.

“[T]hings are back, and they’re positive,” he advised. “They’re exciting.”

However, that has not always been the case, recent times certainly included.

Reed outlined, “We’ve had some difficult times, too. I remember — you may know (Alabama Secretary of Labor) Fitzgerald Washington … this was only, during my tenure in the Alabama Senate, only about five or six years ago. We had an event at the Jasper Civic Center that was a job fair for coal miners (who were unemployed). At that time, I had about 1,000 men and women in my district that were out of work. And the coal industry had run on tough times. That day, we signed up 1,100 men and women that were standing in there with their resume, waiting for an opportunity to ask somebody for a job when they had spent their whole life being a coal miner. The good news is most all those folks have gone back to work (in the coal industry since then). And we’ve got folks that are on the panel with me here and those of you that are sitting out there (in the crowd) that know that the industry has hired hundreds and hundreds of new folks that are making big money doing what they enjoy doing and love doing, which is a great benefit to our community.”

Bussman then spoke about the steam/thermal coal (which is burned for power generation) industry, explaining the high startup costs that these surface miners in the state face. He said a fleet of equipment alone would easily run someone $15 million off the bat.

Not only is this equipment supporting indirect jobs in Alabama, but so is maintaining the equipment. Whether that means highly skilled mechanics or giant specialty tires for the trucks, this is still big business. Additionally, there are tools and resources needed that have provided many secondary jobs from the industry, including the mining explosives provided by companies such as Nelson Brothers. That is not even to mention the transportation jobs supported by coal, from trucking to rail to inland waterways.

Saunders built off of this in his remarks, explaining that the modern mining industry is now what people perceive it as.

Using pictures to make his point, Saunders said that long gone are the days when coal mining entailed miners using pickaxes picking out rocks out of stores of mined coal by hand.

However, high tech equipment also calls for highly trained workers to operate and maintain them.

This is why miners at Warrior Met Coal are also highly paid, with starting annual salaries of $80,000.

Through the company’s unique collaboration with Bevill State, Saunders and Russell outlined that Warrior Met Coal has trained 600 new miners this year alone.

Saunders stressed that this public-private workforce development effort is integral to the company’s ability to thrive and grow, which in turn is crucial to the surrounding community.

This past legislative session, Bevill State’s groundbreaking mine training facility was given another major boost via an approximately $1 million grant for longwall mining training. Reed spearheaded this effort, according to the Alabama Coal Association.

A major theme from the industry and academia panelists on Thursday was that the state’s support of workforce development initiatives and infrastructure investments are crucial to the coal industry, as well as many other jobs juggernauts in Alabama.

Adams said this especially included the Rebuild Alabama Act, which will make possible the deepening and widening of the Port of Mobile’s ship channel in order to compete at the highest level of international trade.

In fact, the met coal (coal used for coke, which is a necessary component in steel and iron making) industry is by far the port’s biggest commodity exporter– and Warrior Met Coal is the port’s largest single customer by tonnage. Overall, coal accounts for 50% of the port’s total business.

Saunders advised that Australian met coal producers are currently Warrior’s biggest international competitor, and the Rebuild Alabama Act’s effects are expected to make the state’s met coal industry even more of a player on the worldwide stage.

Adams hailed state leaders, such as Governor Kay Ivey and the Alabama Legislature, for the infrastructure package and especially singled out the stalwart efforts of Senator Richard Shelby (R-AL) for his support of the port improvements.

While things look up from this perspective, Saunders also advised that Warrior Met Coal was seriously looking into another expansion.

He said that its Blue Creek Mine has been identified as one of the largest untapped coal reserves in America. The company is studying the economic feasibility of the project, with a decision to likely come near the end of this year or early 2020.

If Warrior Met Coal does move forward with this expansion, it would probably mean another 450-700 high-paying jobs in the area.

‘This is a big deal’

This type of industry optimism can continue, with the support of the state and federal governments, Reed said.

“We’re proud of the fact that we are a pro-business state,” Reed emphasized. “We are looking for ways … minimize regulatory requirements that would cause us to not be able to see the kind of investment and growth that we have.”

He then recounted a story a vendor told him this past session that provides powerful perspective into the impact of Alabama’s coal industry across the globe and back here at home.

Met coal mined in the state is being shipped by barge down to the Port of Mobile and then shipped out to European steelmakers. Some of that steel is then sent back through the Port of Mobile to Mercedes-Benz’s manufacturing facility in Tuscaloosa, and those automobiles are enjoyed worldwide, thanks, in part, to the contributions of hardworking, proud Yellowhammer State coal miners.

“For West Alabama, this is a big deal,” Reed concluded. “And I’m just excited to be a part of it.”