Ouch: Stats show Alabama’s economy is punching below its weight

Data compiled from the Bureau of Economic Analysis shows that while Alabama citizens make up 1.52% of the U.S. population, the state only accounts for 1.2% of the American economy. In other words, if Alabama’s economy kept pace with the size of its population relative to the U.S. population as a whole, the state’s economic output would be roughly 21% greater than it is.

The diagram below created by HowMuch.net, a cost information website, compares state economies to show how each state stacks up.

Here’s their explanation for what the diagram shows:

The U.S. as a whole had a GDP of $17.3 trillion in 2014, making it the richest nation by a large margin (about $7 trillion ahead of China). But, as it is well known, the value of economic activity is unevenly distributed throughout the country. The diagram below shows the relative economic value (in 2014 dollars) of each U.S. state. The states are also grouped by color according to the region that they comprise. The first thing you will notice is that most economic activity is concentrated in three regions: Far West (18.6%), Southeast (21.3%), and Mideast (18.2%). All of these regions contain major U.S. States and cover the U.S. coastline, which is where most large cities are located – so it is not surprising that most of the economic value in the U.S. is generated in these regions. 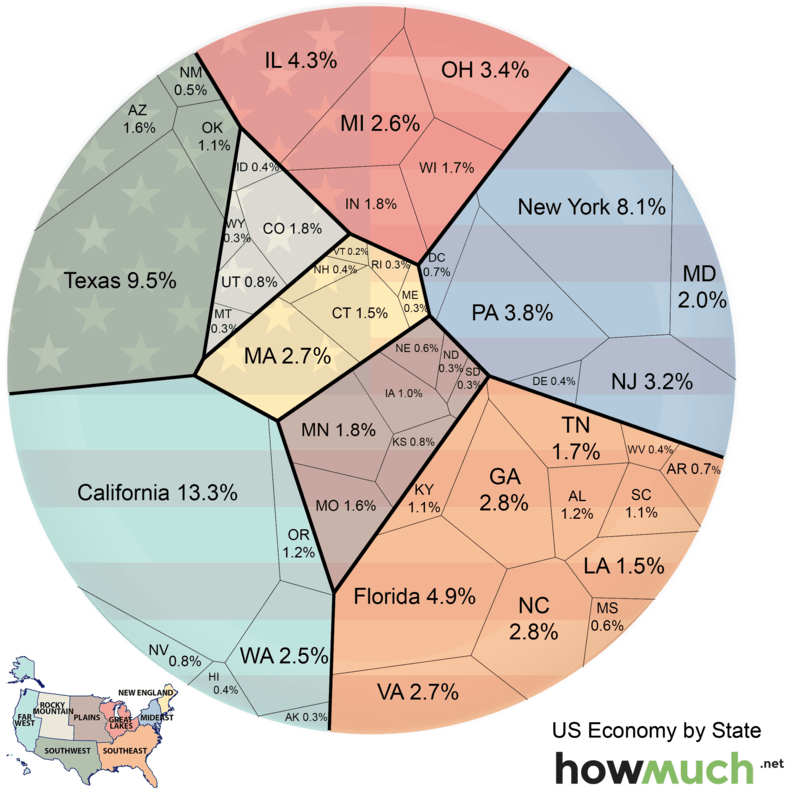 In terms of states, California (13.3%), Texas (9.5%), and New York (8.1%) have by far the largest economies. The states with the smallest economies are Vermont (0.2%), Maine, Rhode Island, North and South Dakota, Montana, Wyoming, and Alaska (all representing about 0.3% of the US economy).

Alabama, on the other hand, with 1.52% of the U.S. population only produces 1.2% of America’s economic output.

The reasons for this are numerous and complex.

A cursory look at the data shows that large states tend to do better than small states, even in relative terms. And coastal states tend to outperform interior states, with Florida being a notable exception due to its disproportionate number of retirees.

Economic diversity also appears to be an important factor in a state’s output.

Agriculture dwarfs every other industry in Alabama. Similarly, states like California and Texas have large ag sectors, but they also have diverse economies that include high-tech, high-growth hotspots like Silicon Valley and Austin. The Lonestar State’s robust economic growth in recent years has also been boosted by mining and manufacturing.

Alabama has made significant strides in attracting large manufacturers, and Huntsville has in recent years become the engineering capital of the country. But opinions vary on what state leaders should do going forward to boost overall economic growth.

A Troy University economist has suggested the state should spend less time creating economic incentive packages for individual companies, and focus more on creating a simple, low tax structure for all businesses. But many economic development professionals say abandoning the incentives would put the state at an overwhelming disadvantage when it comes to attracting major companies like Airbus, Mercedes and Remington.

Alabama’s crumbling infrastructure is another issue about which many large employers are starting to sound the alarm.

These issues and more will be discussed at the Alabama Economic Growth Summit next month at the Renaissance Ross Bridge in Hoover. Get your tickets while they last.