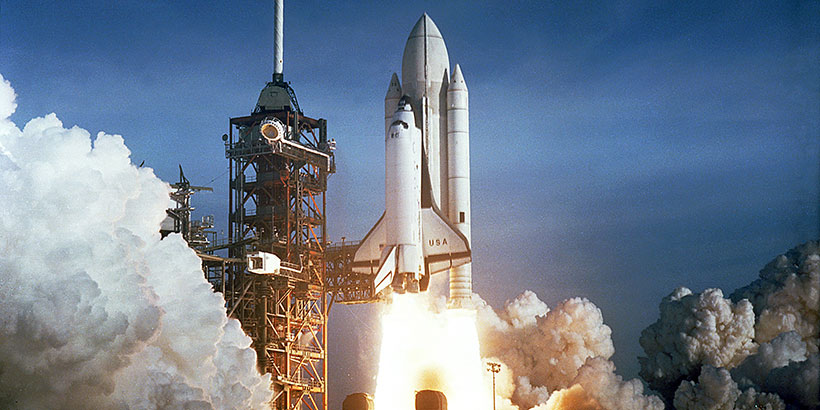 NASA’s Space Shuttle blasted off for the first time 35 years ago, and engineers and scientists from Southern Research made critical contributions to the program during a journey that spanned three decades and a half-billion miles.

In fact, by the time Columbia rose from Kennedy Space Center on April 12, 1981, Southern Research’s engineers had been working on the project for nine years, testing materials that would allow the new spacecraft to withstand the extreme conditions of lift-off and re-entry.

The Birmingham-based organization’s involvement in the Shuttle program didn’t end with the launch that day. In coming years, its engineers remedied a potentially catastrophic rocket nozzle problem and helped NASA prevent a replay of the events that doomed Columbia in 2003, among other things.

“Southern Research’s work on NASA’s Space Shuttle really started with the inception of the program,” said Michael D. Johns, the organization’s vice president of Engineering. “Over many years, we remained on the critical path for material development and understanding of the complex systems required to get people and payloads to space.”

Johns was on the engineering team that evaluated ablative materials used to protect the Shuttle from the high thermal loads and 5,500-degree temperatures generated by its massive solid rocket motors.

The Space Transportation System (STS), as the Shuttle was officially known, flew 130 missions over 30 years, covering 542 million miles and making 21,000 earth orbits, according to a NASA history. Its missions included a critical repair to the Hubble Space Telescope’s mirror and the launch of the Magellan probe to Venus.

The Shuttle program was not the first time Southern Research had focused on manned space flight.

Its engineers helped NASA select heat-shield materials used in the Apollo program after exposing material specimens to conditions similar to a fiery re-entry. The tensile properties of these materials were tested at temperatures up to 6,000 degrees Fahrenheit.

While working on Apollo, Southern Research developed devices to take temperature readings needed to select landing sites on the moon’s surface, and to measure heating rates on the Saturn booster exit. It also operated an engineering materials lab at Kennedy Space Center to provide technical support to NASA contractors.

As the Shuttle program got under way, the ability of Southern Research engineers to evaluate materials in extreme environments once again played a vital role. One example was the carbon-carbon composite leading edges of the orbiter, which experienced temperatures ranging from –150 degrees to more than 3,000 degrees Fahrenheit on every flight.

Other divisions at Southern Research also worked on the Shuttle program leading up to the first launch.

Analytical chemists, for example, conducted tests that identified compounds in charred insulation, while chemists and toxicologists determined the harmful properties of burned insulation.

In one case, Southern Research’s analytical chemists were able to steer NASA away from using a polyurethane insulating foam with a flame-retardant additive because tests showed it produced toxic fumes when burned.

After the STS-8 mission in 1983, an inspection of the boosters revealed that a three-inch lining protecting the rocket nozzle had almost burned away, leaving just a few seconds of firing time before a catastrophic rupture would have occurred.

A group of Southern Research engineers led by John Koenig studied the unexpected event. They identified why the rocket nozzle erosion occurred and provided guidance for material design and process changes to prevent the defect. They even developed a unique laser screening test to ensure there was no repeat.

NASA again called in Koenig and the Southern Research team after Columbia broke up on re-entry on Feb. 1, 2003.

Koenig and the team helped determine how the disaster occurred and modeled the impact event that damaged the Shuttle’s wing, allowing in super-heated gasses that destroyed the support structure. Koenig’s group also developed approaches to repair a wing in space if damage occurred on a future mission.

“The unique talents of Southern Research’s engineers were integral, and, in some cases, enabling for the design, operation and recovery from the flight anomalies and accidents that occurred during the Shuttle program,” Johns said.

In addition, Southern Research developed technology to help the Shuttle program return to space two years after the Columbia accident.