HUNTSVILLE, Ala. — When Casey Marriott, a 2011 University of Alabama graduate and die-hard Crimson Tide fan, half-jokingly invited Nick and Terry Saban to her wedding, she didn’t expect a reply.

“When going over my list for the wedding, I daydreamed and got off topic by thinking about who I could invite that could be a part of my ‘A-list,'” she told Yellowhammer. “I mean, who wouldn’t want Nick Saban at their wedding?”

So Casey went about the task of sending out invitations to her friends and family — along with A-list celebrities like Peyton Manning, Jimmy Fallon, Justin Timberlake, Maroon 5, Cinderella & Prince Charming, and Mickey & Minnie Mouse — and finally, to the Sabans.

Here’s what happened next:

I ended up sending the invitation to the Athletic Department in Tuscaloosa. I am sure I could have found his address, but I thought that might be a little creepy. I got his RSVP last week, and then I got an envelope in the mail from the Alabama Football Department. Freaking out, I opened it and was shocked!

Inside the envelope was a signed picture of Mr. and Mrs. Saban, along with a special note to the happy couple. 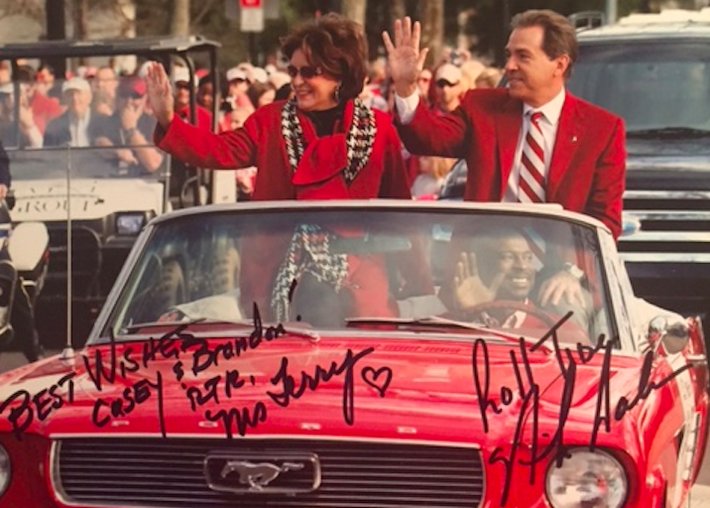 “It really shows what great people Terry and Nick are,” she said. “It was probably just something small and meaningless for them, but it is something I will cherish forever and helps make my wedding process so special.”

Casey and her fiancé, Brandon Jones, are all set to be married on March 14th at Burritt on the Mountain in Huntsville, Ala.

Sounds like the perfect climax to the first chapter of a long and beautiful love story.

Well, except one thing.

“Unfortunately he’s the biggest Tennessee fan ever!” Casey joked about Brandon. “He told me to invite Butch Jones, but I just couldn’t do it!”