Poll: Roy Moore hemorrhaged support after Trumps came out against him

A new poll released on Wednesday shows that Roy Moore is in third place in Alabama’s 2020 Republican U.S. Senate primary race and in danger of soon falling into fourth.

The survey was conducted by Montgomery-based Cygnal, which is a nationally recognized and awarded polling firm that was commended last year for having the most accurate polls nationwide leading up to the 2018 midterms.

Reacting to the poll, Tuberville campaign general consultant Tripp Skipper told Yellowhammer News, “Whether it’s an internal poll, independent poll, or one casually run by Lt. Governor Will Ainsworth on Facebook, one result is consistent….Tommy Tuberville is the clear front runner in the race for the United States Senate.  His personality and conservative message of securing the border,  and supporting President Trump is resonating with Alabama voters.”

The survey also measured favorability of the primary candidates compared to other popular conservative elected officials.

Tuberville also leads the favorability race right now at 55.6%. His unfavorability was 16.5%. Tuberville scored a “very favorable” response of 23.2%, compared to a “very unfavorable” mark of 7.6%.

Byrne saw 41% of respondents view him favorably, while 11.1% viewed him unfavorably. His very favorable and unfavorable ratings were 16.2% and 4.8% respectively.

Merrill actually led Moore in the favorability department, with the secretary of state having 31.6% of respondents answer favorably and 10.1% favorably. His very favorable and unfavorable ratings were 11.5% and 3.2% respectively.

Mooney has the longest road to go in name identification and favorability, as 57.9% of respondents said they had never heard of him.

Moore, while having virtually 100% name identification, is far underwater with the majority of Alabama’s Republican primary voters. Poll results showed 27.7% of respondents viewed him favorably, but 65.4% responded unfavorably. His very favorable and unfavorable ratings were 10.3% and 49.5% respectively.

“Entering the race with a -38 net favorability is going to be an enormous hurdle for Moore to get over – even if he does have a horse,” Brent Buchanan, Cygnal’s CEO and founder, said in a statement.

This came after Donald Trump, Jr., followed by President Donald Trump, recently came out against Moore running, saying he could once again hand the seat to Senator Doug Jones (D-AL).

“You’re literally the only candidate who could lose a GOP seat in pro-Trump, pro-USA ALABAMA. Running for office should never become a business model. If you actually care about #MAGA more than your own ego, it’s time to ride off into the sunset, Judge,” Trump, Jr. said.

…If Alabama does not elect a Republican to the Senate in 2020, many of the incredible gains that we have made during my Presidency may be lost, including our Pro-Life victories. Roy Moore cannot win, and the consequences will be devastating….Judges and Supreme Court Justices!

Then, after Moore last week announced his bid, Trump, Jr. doubled down.

“I can assure everyone that by running, Roy Moore is going against my father and he’s doing a disservice to all conservatives across the country in the process,” he said.

Cygnal’s data shows that the remarks by both Trumps may have had a significant effect, as Moore’s favorability numbers are down from just months prior. 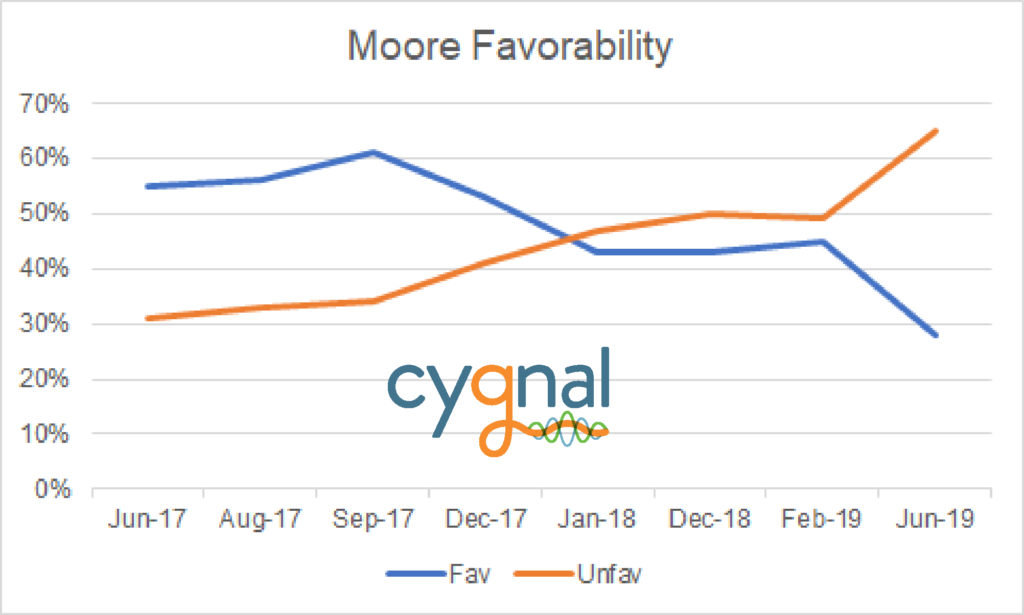 “In the span of two years, Moore’s favorability with GOP primary voters has completely cratered – a swing of 64 points,” Chris Kratzer, vice president of research and analysis at Cygnal, advised. “The cult of personality Moore once commanded has faded away and his once reliable voter base is only getting smaller.”

The newly released Cygnal survey also featured two questions that proved the key point made by the Trumps: Moore would again struggle in a general election compared to other Republican contenders.

A sizable 31.1% of GOP respondents said they would be likely to vote for Jones over Moore in 2020, while an additional 7.2% were unsure.

A separate question showed that only 57.4% of GOP respondents voted for Moore in the 2017 special election against Jones. 22% voted for Jones, while 7.2% chose a write-in candidate and 9.6% chose to not vote.

“Last week I would have said – and did – that Roy Moore is in the ‘catbird seat’ to be in a runoff. That was based on his February 2019 image. President Trump recently turning on Roy Moore has caused significant damage to Moore’s standing with Republican voters to the point Moore is unelectable,” Buchanan concluded.

You can view the survey summary here.