Nick Saban and Taylor Swift have something in common: They’re both vilified for political silence 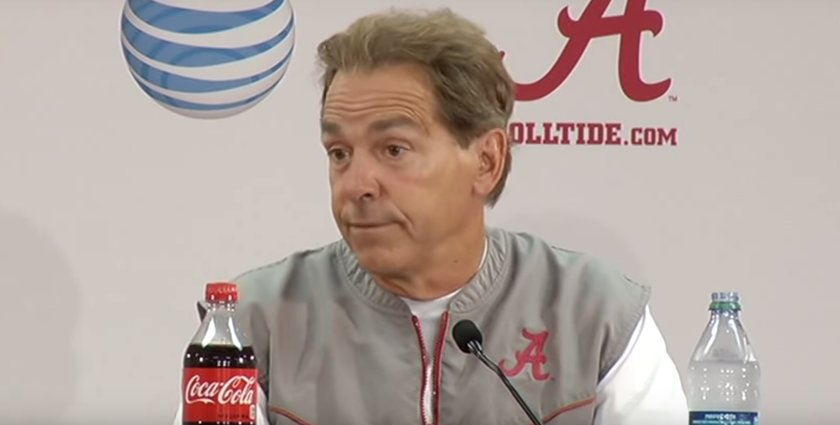 We have all watched as people in the sports and entertainment world have taken various positions on hot-button political positions only to be told that they are now terrible at their chosen profession.

In the world of entertainment, Patton Oswalt is told he is a terrible comedian and Alec Baldwin apparently now sucks at acting to a sizable portion of those who are politically active for holding the wrong opinions.

In the sports world, look at Colin Kaepernick… OK, that’s a bad example, he was terrible before he decided he became America’s least effective Social Justice Warrior.

You will notice most politically-active celebrities are liberal in nature; there is no danger in being pro-gay marriage, but let a random reality TV star say they support traditional marriage (or any conservative cause) and they will be targeted for destruction.

But a new thread is now emerging. Not only are we mad when people express opinions we don’t like, we are starting to get mad at celebrities who say nothing. Taylor Swift’s silence on the Trump administration is treated by some as an outright endorsement of its activities and decisions. “Is she a feminist? Is she a racist?” Why are these questions being asked? Because she has said nothing. The sound of her silence is deafening … or something.

Nick Saban, who probably came in third in the Alabama Senate race, is being targeted as a “clueless, gutless, selfish coward” for daring to not say anything about the Senate. But, again, let’s be honest, the real problem is that he didn’t help obliterate Roy Moore.

The lead-up to Roy Moore and Doug Jones’ election Tuesday should have been Saban’s shining career moment to show true leadership and humanity. By remaining silent on the numerous allegations that Moore was a pedophile, Saban showed he does not care about the plight or protection of young women and girls.”

The piece also said he didn’t care about black people, all because he is preparing for a College Football Playoff game against Clemson and not lecturing his fans about politics.

The people who write these articles scolding Saban and others for not using their powerful positions as a weapon, would be demanding he be fired if he dared stated he didn’t believe the women or that he was voting for Roy Moore. They would declare that it was not his place to try to influence his football players or fans of the Crimson Tide. They would write screeds about how Saban was using taxpayer-dollars to promote his political views; they might even call for him to be charged with a crime.

This stuff only cuts one way. They want their liberal views expressed and highlighted, and all other views silenced, as they are on ESPN. This isn’t about wanting people to be more politically-involved, this is about continuing to bully people into thinking the “right way” and punishing people for thinking “incorrectly”.

Saban isn’t an idiot. He knows this game and he wants no part of it.

I don’t really make political comments. So, if I say I like one person that means everybody who voted for the other person doesn’t like me. So, why would I do that?”

Nick Saban and Taylor Swift have every right to voice their opinion, but they are under no obligation to amplify your viewpoints.

Dale Jackson hosts a daily radio show on NewsTalk 770 AM/92.5 FM WVNN and a weekly television show, “Guerrilla Politics,” on WAAY-TV, both in North Alabama. Follow him @TheDaleJackson.