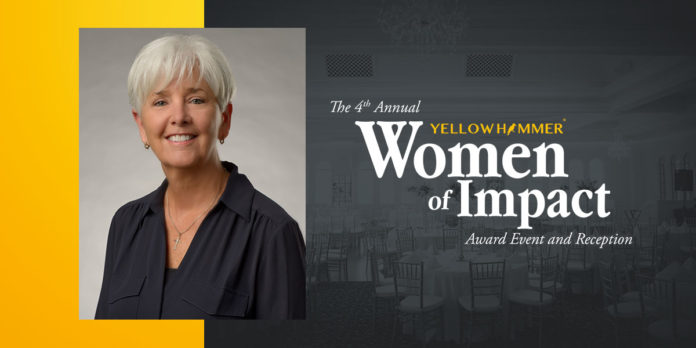 From the Ivy League to the Yellowhammer State, Nancy Kane’s journey has set ablaze a trail of business excellence and charitable service every step of the way.

Her story begins in New York, where she describes her career path as being “non-traditional.”

From an early age, Kane vividly recalled an important piece of advice her father offered. “You can do anything if you set your mind to it, the world doesn’t owe you anything,” her father told her. She took this piece of wisdom to heart and applied it to everything she has set out to accomplish.

“He always wanted me to be a lawyer, and being the idealistic person I was when I was graduating from college, I didn’t know what I wanted to be and didn’t want to go to law school – which is what a lot of people did because they didn’t know what else they wanted to do,” said Kane.

She decided, unlike her peers, she wanted to be what she calls “rebellious.”

Upon graduating from the State University of New York College at Oneonta with a degree in psychology, Kane chose to live what she deems the “real world” experience. Kane worked as a probation officer with a drug and alcohol caseload and later became an air traffic controller for a brief period of time.

It was then that she decided that she did indeed want to become what her father knew was her calling, a lawyer.

Kane went on to attend one of the most prestigious academic institutions in the world, the Ivy League’s Yale Law School. Upon obtaining her law degree, she served as an associate at Debevoise & Plimpton, a large New-York based law firm where she practiced securities, finance and general corporate law.

She worked at the firm for a total of seven years, where she, at times, was given the opportunity to work from home to be with her two adopted children. While at the firm, she served as outside securities counsel for Protective Life Corporation. It was by this association that she became acquainted with who would soon become her future colleagues.

Kane recalls her desire to spend more time with her family. To do this, a change in employment was necessary.

“One individual lawyer in particular kept talking to me about quality of life,” said Kane. “Now, I lived in an area where a lot of people did what I did. The kids were starting school, and I wasn’t going to be able to go see school plays and get them involved in activities.”

It was in that moment that Kane decided she wanted to make a significant change in her professional career.

She added, “So, one day I remember calling her up and saying ‘I’ve made a decision, I’m going to leave the firm and I’m going to start thinking about what the next thing is,'” going on to say that Protective insisted that she send the company her resume.

Protective invited Kane and her husband to Alabama to spend the weekend, where she recalled “falling in love” with Birmingham and the company. She says her family took a “leap of faith” and decided to make the move, citing the need to improve her family’s quality of life.

She tells Yellowhammer News that she was excited to take her talents to a company that “was true to its values” in treating their associates and clients like family.

Kane, in her illustrious career at Protective, rose through the ranks and developed an impressive resume of corporate success.

She began as senior associate counsel in 1997 and served in the role for 11 years until later being named senior vice president of capital markets. In 2013, she became head of the company’s acquisitions business segment.

Her impressive career at the firm she loved did not end there. After 22 years of service to the financial service holding company, she earned the title of executive vice president of acquisitions and corporate development.

Due to her spectacular business acumen, Protective closed six acquisitions which included four of its largest transactions. Her work resulted in an estimated capital investment of a staggering $4 billion. She credits her success not to herself alone, but to a team working together toward a common goal, humbly stating, “no one can do that on their own.”

Kane has immersed herself within the community as she has dedicated years of service to many charitable and civic organizations. Among these are the Children’s Aid Society and Foundation, the Hispanic Interest Coalition of Alabama, Heart Gallery Alabama, and Momentum, Building Leadership in Women.

To Kane, her most important work was not the service she partook in during her distinguished career in corporate law. For nearly two decades, Kane has volunteered at Special Equestrians, a therapeutic riding organization. It was during her service there that she realized her passion.

She and her husband, on their 90 acres of land, are raising a special breed of horses to be utilized for riding programs for the purpose of assisting individuals with physical, psychological and emotional difficulties. Kane expressed her intentions to launch a program for children who have lived in long-term foster care.

Kane describes the therapeutic impact special equestrians can have on those who are in need of certain physical and mental health care.

She added, “It’s some place you can go where you can just have a connection with an animal and leave that other history and negative legacy behind you, at least for a little while. I’ve seen it work magic with some of the programs we’ve worked with, so we want to continue that.”

A professional who has achieved enormous feats in the world of business and a servant who is dedicated to bettering the lives of those in need, Nancy Kane has gone above and beyond in positively impacting the state she calls home. In her retirement, she has chosen to continue to make an impact in her community and loves every moment of it.

From her vast business contributions to her passionate community service, there is no doubt that the state of Alabama is a better place to live because of her humble and dedicated spirit.

Yellowhammer News is proud to name Nancy Kane a 2021 Woman of Impact.