April Weaver is a 2022 Woman of Impact 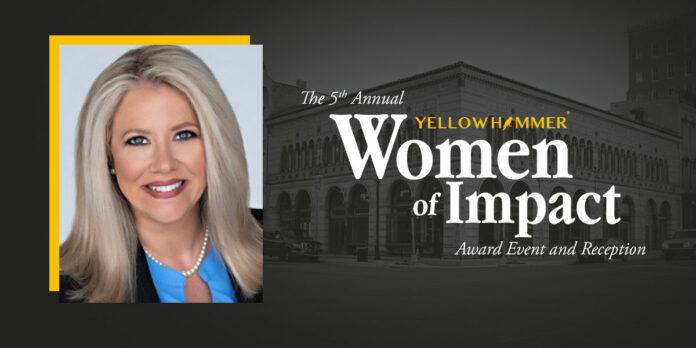 With a humble and servant-minded mentality, State Sen. April Weaver (R-Brierfield) is one of the most authoritative voices in the Alabama Senate on issues that heavily impact the citizenry.

The lone female Republican in the Legislature’s upper chamber, Weaver, at just the age of 51, has impacted the lives of Alabamians in a fashion as someone who has been involved in the political arena far longer than she has.

A registered nurse, Weaver has dedicated more than 23 years of service working in rural and urban hospitals in clinical and leadership capacities.

From 2002-2017, Weaver worked for Brookwood Baptist Health in a variety of administrative capacities. There, she rose to director of operations at Shelby Baptist Medical Center. Prior to that, she served as Brookwood’s director of public, community and government relations.

From an early age, Weaver found her passion in health care due to the critical role the community plays in people’s lives.

“Health care is just something that I felt has always been a part of me,” said Weaver. “I’ve always had a lot of respect for the health care community and the way that they take care of others in their time of need.

“It’s just something in my heart felt like was a career path that I needed to be on.”

While working in the industry, Weaver saw issues she believed needed to be addressed. Her passion for advocacy, said the senator, is what inspired her to become involved in the political arena.

“I remember being in political debates and going to forums and people saying, ‘April, tell us about your political experience.’ And I would say, ‘I don’t have any political experience. All I can promise you is that I’ll pray about it, vote my heart and listen to the people,'” Weaver said. “When I’ve made my decisions based on those things, I’m able to lay my head down at night knowing in my heart that I’ve done the right thing.”

A political newcomer in 2010, Weaver faced three opponents during her first campaign. She won that race without a runoff. Weaver, demonstrating her popularity among the constituents, went on to secure reelection to House District 49 by overwhelming margins in 2014 and 2018.

During her service in the lower chamber, Weaver ascended to chair of the House Health Committee — the first female in Alabama history to do so.

In 2020, Weaver received an appointment from the Trump administration to become the Region Four director of U.S. Department of Health and Human Services.

Weaver returned to Alabama politics in 2021, winning a special election to the State Senate, representing District 14. Just as in her successful House bids, she was elected to the upper chamber with overwhelming support from the citizenry.

“It is such an honor to have that kind of support from my constituents,” she said. “I feel like it’s important that I continue to be engaged with the people that I serve and to really see what the needs are in my district so that I represent them appropriately.”

Being the only female in the Senate GOP Caucus, Weaver said, allows her to bring a “much-needed” insight to chamber discussions.

“It’s been such an honor to be part of the Senate — as the only Republican woman in the Senate. I feel like I bring the upper chamber a much-needed female perspective,” she said. “But it’s one that’s firmly rooted in conservative principles and traditional values, which represent the thoughts of the people of my district. And I’m honored to continue to represent them.”

Along with serving as the elected chair of the Alabama Health Care Workforce Task Force, Weaver serves on the following Senate committees:

Weaver told Yellowhammer News she was proud to have strong working relationships with her legislative colleagues. In the upper chamber, she has emerged as a “force to be reckoned with,” according to Senate President Pro Tempore Greg Reed (R-Jasper).

“Since Senator April Weaver’s election to the Alabama Senate in 2021, she has been a force to be reckoned with. April is consistently delivering a breath of fresh air and ideas, not only to her colleagues in the Alabama Senate Republican Caucus but the entire Alabama Legislature,” said Reed in a statement to Yellowhammer News.

“She continues to be an advocate and proponent for the business community and remains passionate regarding healthcare matters for Alabamians,” said the Senate leader. “The most admiring quality about Senator Weaver is her unwavering support and dedication to the constituents of Senate District 14. I am proud of my colleague and friend for her induction in to the ‘2022 Women of Impact’ series.”

Combining her passion for health care and public service, Weaver has spearheaded issues relating to solving Alabama’s opioid crisis. Partaking in such a vital battle, Weaver said, is of the utmost importance to her.

“I’m most proud of my effort to attack and combat the opioid crisis in Alabama,” she said. “Too many families have suffered losses, and too many lives have been ruined by opioids. The work of the panels on which I served and the committees that I’ve chaired have had a positive impact. And the war on drugs will continue for the foreseeable future. The opioid crisis is no longer at the same level as it was a few years ago.”

Lt. Gov. Will Ainsworth said that Weaver’s ability to work alongside colleagues to pass impactful measures made her “an effective lawmaker.”

“I served with April Weaver in the Alabama House and witnessed firsthand her dedication to serving her constituents and her determination to pass the bills and measures she sponsored,” said Ainsworth. “The same qualities are even more evident now that she has joined the 35-member Senate as opposed to the 105-member House. She has already built strong friendships, trust, and alliances with many of the senators, and those are the tools that make her such an effective lawmaker.”

Yellowhammer News is proud to name April Weaver a 2022 Woman of Impact.