If you live in parts of Alabama, you are likely sleep-deprived … and courting disease or death

If you live in Alabama, chances are you are more sleep-deprived than people living in New Hampshire, D.C., California, Texas, and 37 other states, particularly if you live in the Birmingham-area and southwest parts of the state.

Alabamians report getting “short sleep” in larger numbers than in many parts of the country, according to the most recent data available from the CDC. 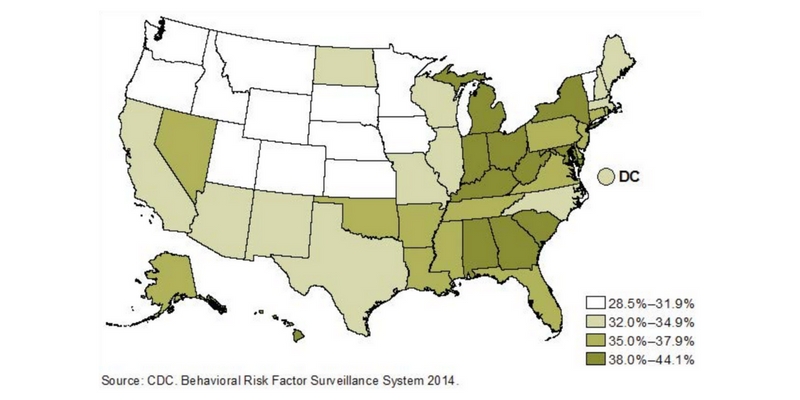 Short sleep is defined as getting less than seven hours of sleep a night.

If you pride yourself on being an early bird and a night owl, shirking sleep in favor of productivity (or Netflix), listen up: Recent science shows sleep deprivation can kill you.

So says Jeff Stible, a brain scientist and vice chairman of Dun & Bradstreet who recently wrote that we need to pay more attention to findings from a 2013 study showing that our brains flush out deadly toxins in our sleep.

It would take 200 sleepless hours, or 11 days straight, for those toxins to kill us, said Stible.

Few would try such a stunt, of course, but far more of us try to get by without enough sleep, which still kills us … just slowly.

— Everything below our necks uses the lymphatic system to clear out toxins. Our brains’ only known mechanism for clearing out the junk is sleep.

—  That groggy “drugged” feeling you get when you don’t get enough sleep is because you are indeed drugged. Our brains produce mind-altering drugs without any help from the artificial ones. Without sleep, our brains can’t get purged and those drugs pile up.

— Even if you think you can thrive on five or six hours of sleep, you’re wrong. Scientists say you need at least seven hours a night. Sleep deprivation builds up over time, eventually catching up with us and causing significant harm.

How much harm? Here’s a New York Times article examining the 2013 study and sleep deprivation effects in more detail.

Short sleep is concentrated in Alabama, Georgia and South Carolina, and in parts of the northeast, where nearly half (38 to 44.1 percent) of survey respondents say they get less than seven hours of sleep a night.

Apparently, people in the Great Plains states sleep great—where only 28 to 32 percent of respondents, in general, say they get less than seven hours of sleep a night.

Here are more interesting Alabama-specific sleep facts from the CDC:

— Chronic conditions such as arthritis, depression, cancer, asthma and diabetes are more common among those who don’t get enough sleep.

(Do you get enough sleep? Start a social media conversation about it with your family and friends.)