Lisa Williams is a 2020 Woman of Impact 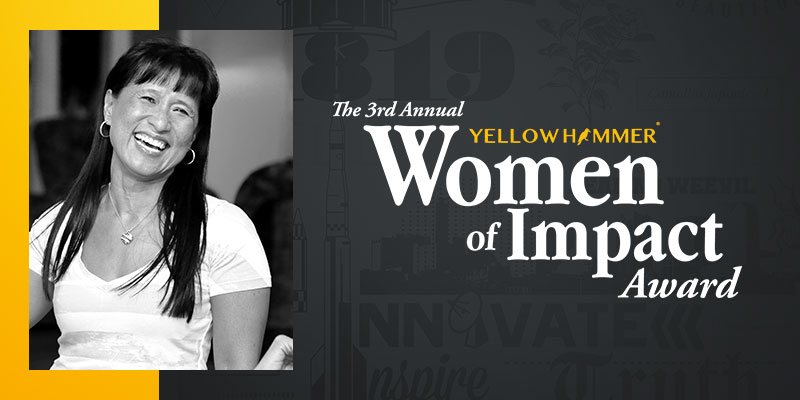 Lisa Williams’ journey has been a long one — and in more ways than one.

As a female with a disability in communist Vietnam, her future would very likely have been limited, with no prospects of an education, career or family of her own.

However, Williams was rescued from that fate by the bravery — and love — of an American soldier during the Vietnam War.

Williams remembers meeting Sgt. 1st Class George Duncan when she was six-years-old. Duncan, who was stationed nearby, reenlisted after finishing his tour so he could return to Saigon and marry Williams’ mother.

Duncan would then take the two back with him to the United States. The little girl, born on July 4, had seemingly been destined to be an American. And she has been working every day since to fulfill her American Dream, taking nothing for granted.

“I vowed never to squander the unique opportunities I have as a result of my father, who was my hero, making the sacrifices he and so many others make, so I can live free and be successful,” she has said.

Determined to do just that, Williams flourished right here in the Yellowhammer State.

She earned a bachelor’s degree in chemical engineering from the University of Alabama in Huntsville (UAH). Williams went on to work as an engineer in the private sector before founding 3D Research Corporation in 1997 along with her husband, former State Rep. Phil Williams. The company, formed to provide engineering services to support soldiers, became a tremendous success due to meticulous preparation, unwavering dedication and high-level talent.

Indeed, Williams’ work earned her recognition in and around the business community across Alabama, as well as nationwide.

For example, she was named the state’s Small Business Person of the Year in 2004, the same year she was honored as the Huntsville/Madison County Chamber of Commerce’s Executive of the Year. She also made the list of the Top 10 Women Entrepreneurs of America that very same year.

3D Research at that time was one of the country’s fastest growing companies and would be acquired in 2005 by the Schafer Corporation, now a subsidiary of Belcan. Williams then took a step back from the world of business to spend more time with her son, while also staying active by helping local budding business owners and giving back to her community through civic leadership.

“Family is what makes you a success,” Williams has explained. “My son and husband have greatly supported what I do in the business world. You work all the time. Without the support of your family, it just doesn’t happen. My proudest accomplishments are not just the successes with the companies, but the fact that I’ve had two great guys that have been there with me. And of course, my mother. We came from Vietnam with nothing. She taught me that America is a great country and that in America, it doesn’t matter if you are female, Asian, short or tall, or rich or poor, it’s all about how bad you really want something and how much you really have a passion for it.”

Fast forward to today, and Williams has founded yet another successful business venture of her own: Soldier 1 Corporation.

This consulting company, much like her life as a whole, is dedicated to honoring the incredible sacrifices of soldiers like her father. Given her experience and knowledge in the field, Williams now advises other entrepreneurs on navigating the complex world of business from start-up onwards. The endeavor is especially focused on assisting entrepreneurs who are veterans, with an eye towards these entrepreneurs becoming sustainably successful and hiring even more veterans for their businesses. This concept was born when Williams witnessed soldiers struggling to find work after returning home from deployment.

In a recent interview with Yellowhammer News, Williams outlined, “It’s always been my passion to support the soldiers and our veterans.”

Soldier 1 Corporation, she affirmed, is truly another way to “pay it forward.”

“I know the bravery and the courage that it takes for our soldiers to be in war zones,” she added. “I’m a result of what they have sacrificed. … I just always want to let our veterans know that when you look at Lisa, you’re looking at the result of your sacrifice, so that you don’t think that what you did was not worth it. So, every day that I live in this country I want to be worthy of that sacrifice.”

Williams’ CV also includes past service as president and CEO of System Dynamics International and as a member of the board of directors for the Business Council of Alabama. She received an honorary doctorate from UAH’s School of Business in 2004. Williams has served and continues to serve on too many civic and philanthropic boards to name.

However, the boardroom is not the only stage on which Williams excels. In her free time, she enjoys playing in the Huntsville rock ‘n roll band “JED Eye,” for which Williams sings and plays the electric guitar.

Williams says she often advises people to take “calculated risks” rather than “chances,” with high risk equating to high reward. This has paid off during her career, with Williams approaching being a female in an historically male-dominated field as a reality to plan for rather than an obstacle. Challenges in business and in life are not unique to being a female, she stressed.

“I’ve always been in a male-dominated world, whether it be engineering, business, rock and roll — being a female guitar player … but, so what? Just do what you love,” Williams remarked.

She has followed her own advice over her career and life journeys, with Williams reaping the rewards as a result of boldly pursuing her passions.

“You know, the amazing thing about America — others may disagree with me, but I’m living it,” Williams said. “My America. Yeah, I’m female, it’s obvious. I’m Asian, it’s obvious. Because I have polio, I walk a little different than others — it’s obvious. But the true nature of who I am is what people recognize. And I appreciate that about our country. None of those things have ever held me back from what I wanted to do.”

“Being successful is doing what you want to in your life,” she added. “I take that with me every day, and I continue to try to pass that message on to anybody that will listen. You know, America is the only country where you can be poor but be rich.”

Williams concluded that if you live each day with a true “attitude of gratitude” to those who paved the way for you, you will never be disappointed.

Yellowhammer News is proud to name Lisa Williams a 2020 Woman of Impact.