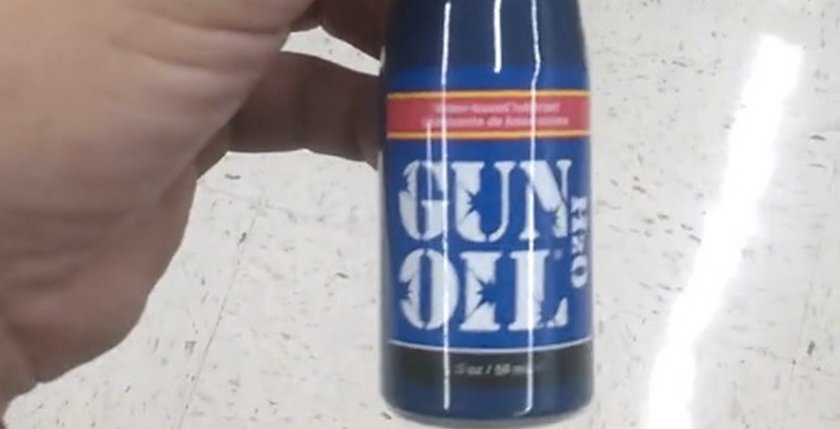 FLORENCE, AL–An unsuspecting customer is shocked after reading the fine print on the product -“Gun Oil H2O”- in Walmart’s sporting goods section. Grabbing his cellphone, Jamie Lee Bracey records himself realizing that the product wasn’t to clean a rifle or pistol, but for some other use entirely.

Imagine Bracey’s surprise when he reads that this “Gun Oil” is “for topical use” and user is to “apply desired amount to genital areas.”

That’s right, Bracey was reading “Water-based lubricant” in a much different context than originally assumed. Water used in gun oil for a firearm would ultimately cause rust which is enough to put “Gun Oil H2O” back where you found it.

TheBlaze reports that sporting good staffers at both Walmarts in the Florence, Alabama, area said there is no “Gun Oil H2O” for sale at gun counters. It’s not the first time a mix up like this has happened though. One store reports that the product is a pharmacy item that’s mistakenly brought to sporting goods in return boxes.

“They don’t even know what they’re sellin’,” Bracey said. “It’s crazy. Getcha some!”

According to wideopenspaces.com it’s an “epic, hysterical fail on Walmart’s part.”

Although it’s possible that the risqué product may have been moved to create a viral video with now 1.4 million views, it’s still laughable and makes for a classic mixup.