MONTGOMERY, Ala. — The Bentley administration began releasing Wednesday lists of services and locations executive agencies say will be closed because of budget cuts.

The first wave of announcements came during the lunch hour Wednesday, with the Alabama Law Enforcement Agency’s (ALEA) announcement that it will close 31 satellite Drivers’ License offices across the state. 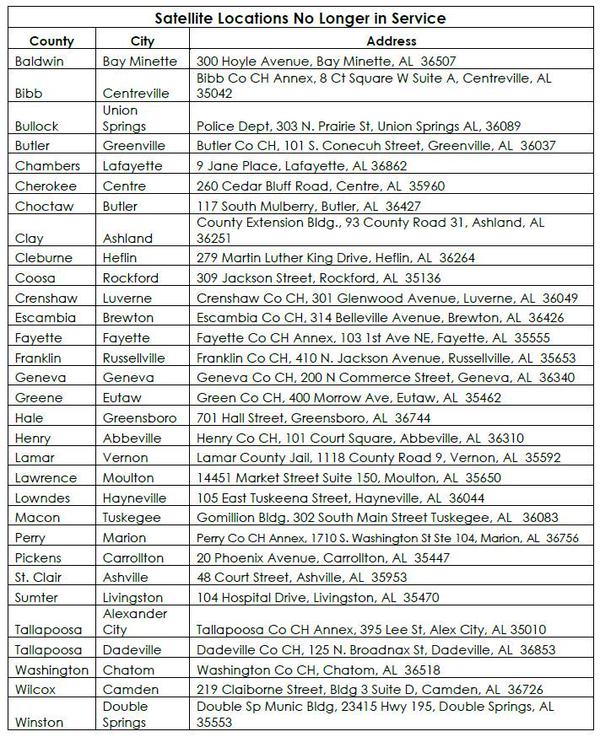 “Since the Jan. 1, implementation date of ALEA, my staff and I have worked hard to make improvements and optimize customer convenience to the citizens of Alabama,” said ALEA director Spencer Collier. “In July, I announced several advancements that will help the driver’s license issuance process including online scheduling, online driver license renewals and duplicates, self-serve kiosks, digital licensing for smart phones, and statewide equipment upgrades. Since making that announcement, we have had over 40,000 transactions online. The impact of the changes due to the budget cuts will be lessened because of the implementation of these technology-based services, including online renewals.”

According to director Collier, the offices closed due to the $11 million cut to the agency’s budget were not owned by the state, and only service approximately 5 percent of the state’s drivers’ license holders. The traveling license examiners that worked part-time at the satellite offices will be relocated to district offices full-time.

The Bentley administration is expected to also announce which state parks could be closing due to budget cuts.