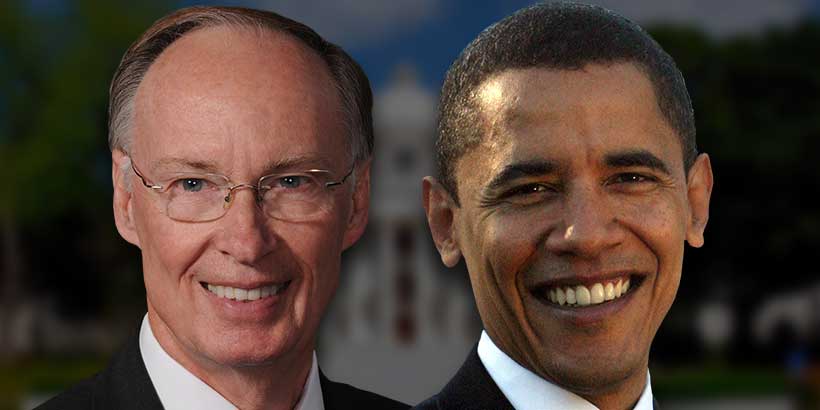 Alabama is a political hot mess right now. The heads of all three branches of state government are facing legal trouble and removal from office. The state has experienced multiple budget shortfalls in recent years and raised taxes in 2015, making Alabama an outlier in a region filled with states reducing tax burdens and reforming government. Every state bordering Alabama has a superior business tax climate, according to the non-partisan Tax Foundation. In fact, most of those neighboring states have recently passed tax policy changes that will increase their competitive advantages over Alabama.

Meanwhile, Alabama Gov. Robert Bentley (R) has pushed his state in the opposite direction by raising taxes and refusing to put expenditures in line with available revenue. Last year, Gov. Bentley signed into law a $180 million tax hike on nursing homes, pharmacies, hospitals, and tobacco. This was the state’s latest attempt to temporarily patch Alabama’s cyclical budget shortfall, which dates back to 2012, when Gov. Bentley borrowed $437 million to address a three year deficit. Since then, Alabama has not done what is necessary to get the state back on sound fiscal footing. In fact – rather than rectify the state’s overspending problem, politicians and bureaucrats in Montgomery are proposing new spending projects that Alabama taxpayers simply cannot afford. An example of this is how Gov. Bentley wants Alabama taxpayers to fund the construction of a new bridge that will allow well-heeled vacationers to get to their beach houses faster.

There has been much discussion in Alabama about the need for a third bridge across the Intracoastal Waterway connecting the mainland to the beach communities of Gulf Shores and Orange Beach. Those towns are currently connected to the rest of the state by two bridges – one is a “free” public bridge, the other is privately owned, operated, and tolled. One might think private investors would be interested in a public private partnership to construct and operate a third bridge like the current Beach Express toll bridge arrangement. But some in Alabama state government are instead calling for a taxpayer-funded bridge with a price tag of $30 million – a number that is likely a lowball figure, given typical cost overruns associated with government infrastructure projects. The Huffington Post’s Paul Alexander explains how this bad idea gained traction:

Plans for the new bridge accelerated after Governor Bentley dedicated $58 million, taken from the $2.3 billion settlement BP was required to pay Alabama for economic and environmental damages caused by the 2010 oil spill, to build a hotel and convention complex near Gulf Shores in Gulf State Park. A road will have to be built to the proposed site of the new bridge — only a mile and a half west of the toll bridge — and, perhaps not surprisingly, some land that will have to be purchased for that road belongs to a company partially owned by Gulf Shores Mayor Robert Craft. The new road will also run adjacent to land owned by the family of former Governor George C. Wallace. These landowners, no doubt, will benefit financially from the construction of the new road.

If a third bridge to Gulf Shores and Orange Beach is to be built, the best funding method, especially given Alabama’s budgetary troubles, is a user fee model, which is what a privately owned, operated, and tolled bridge would provide. One of the biggest problems with a state government-funded bridge is that it would have taxpayers across Alabama footing the bill for a bridge that many of them will never use. A new government-constructed bridge would also have in-state taxpayers financing a bridge that serves out-of-state communities that are wealthier than most in Alabama.

Addressing Alabama’s existing infrastructure deficiencies is a higher priority than a third bridge to the beach. In addition to the problems that come with having a new bridge paid for by low and middle income households who will never use it, there are more pressing transportation needs across the state. The American Society of Civil Engineers recently looked at Alabama’s transportation infrastructure, assigning Alabama’s roads a D+ rating, while its bridges were scored as a C-.

Other states in the region have passed tax reforms that make them more attractive places than Alabama to live, invest, and do business. After the enactment of more than 20 federal tax increases over the last six years, piling on with more tax hikes at the state level, as Gov. Bentley and Alabama lawmakers did just last year, is bad enough. Yet with its consideration of this new publicly-funded bridge, Alabama officials are demonstrating they aren’t the best at appropriately utilizing taxpayer dollars as it is. As Americans for Tax Reform president Grover Norquist says, no state is a total failure, some, like Alabama is doing now, just serve as bad examples.

Patrick Gleason is director of state affairs at Americans for Tax Reform and a senior fellow at the Beacon Center of Tennessee, a free market think tank based in Nashville. Follow Patrick on Twitter: @PatrickMGleason