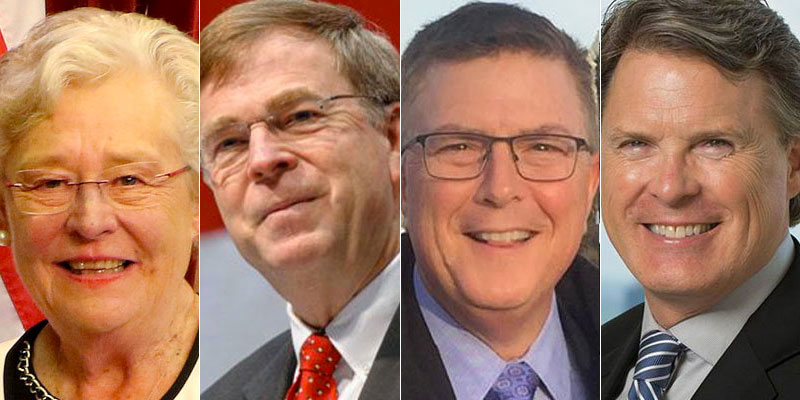 — The misunderstood ethics bill, votes for Roy Moore, and arming teachers all showed differences in the candidates who appeared at the debate.

— There is no benefit for the sitting governor to make herself available to Alabama’s liberal thought leader so they can harangue her for supporting Roy Moore.

— The charges are related to payments made to to Rep. Micky Hammon to push a failed insurance bill through the Legislature.

3. President Donald Trump calls a con artist’s con job a “con“, she threatens to sue him for more money

— President Trump broke his Stormy Daniels-related silence when he responded to the release of a sketch artist’s depiction of a man Stormy Daniels says threatened her years ago with a Tweet saying, “A sketch years later about a nonexistent man. A total con job, playing the Fake News Media for Fools (but they know it)!”

— Daniels responded by declaring that she could now sue the president for defamation, stating “I absolutely think we can make a defamation claim about what happened this morning.”

4. One of Trump’s mistresses is released from her non-disclosure agreement by American Media

— The parent company of the National Enquirer has released ex-Playboy playmate Karen McDougal from her agreement and she can now speak freely about her relationship with President Trump.

— A.M.I. will get the first $75,000 McDougal makes from the story, they will run a cover story on her, they will publish her fitness columns, and allow her to have the “life rights” to her story.

5. The Trump organization wrote a check to the Treasury for profit derived from foreign governments, liberals are still mad

— One of the left’s more far-fetched attacks on President Trump has been based on a misreading of the “Emoluments clause” that implies the president’s businesses can’t make money with foreign governments, which is not what it says.

— The Trump organization wrote a check to the Treasury Department for $151,470 for profits the company made from foreign governments, which the “Citizens For Responsibility and Ethics” claim doesn’t solve the Emoluments issue.

— Huntsville gun range, Bullet and Barrel, and Yellowhammer News have been blocked from boosting content Facebook has declared promoted the “sale of firearms (which it did not) and other content they said was “shocking” or disrespectful” which was laughably not.

7. Fresno State professor says she is glad Barbara Bush is dead and declared herself untouchable, the school disagrees

— A professor took to social media declaring Barbara Bush was “a generous and smart and amazing racist who, along with her husband, raised a war criminal”. When criticized she decided to give out the phone number of a different university’s counseling line.

— Fresno State sought to distance themselves from the professor by saying she could be fired, she is currently on leave, they are looking into the matter, and taking it “very seriously”.