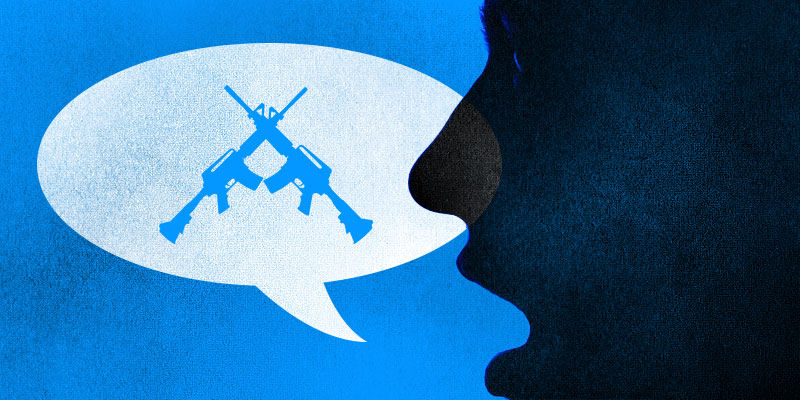 Before we discuss violence with guns, I’d like to run a couple of questions by you. According to the Centers for Disease Control and Prevention, every day nearly 30 Americans die in motor vehicle crashes that involve drunk driving. What kind of restrictions should be placed on automobile ownership? Should there be federal background checks in order for people to obtain a driver’s license or purchase a car?

The FBI’s 2015 Uniform Crime Report shows that nearly three times more people were stabbed or hacked to death than were killed with shotguns and rifles combined. The number of shotgun and rifle deaths totaled 548. People who were stabbed or hacked to death totaled 1,573. Should there be federal background checks and waiting periods for knife purchases?

Any mature and reasonable person would argue that it is utter nonsense to deal with drunk driving deaths and knife deaths by having federal background checks and waiting periods to obtain a driver’s license or to purchase a car or knife. One would recognize, just as courts and the general public do, that cars and knives are inanimate objects and cannot act on their own. Therefore, if we want to do something about deaths resulting from drunk driving or being stabbed or hacked to death, we must focus on individuals. It would be folly and gross negligence of victims for us to focus on inanimate objects like cars and knives. Guns are also inanimate objects and like cars and knives cannot act on their own. It’s also plain folly to focus on guns in the cases of shooting deaths.

What about the availability of guns? It turns out that for most of our history, a person could walk into hardware and department stores or a gun store, virtually anywhere in the United States, and purchase a rifle or pistol. The 1902 Sears mail-order catalog had 35 pages of firearm advertisements. Other catalogs and magazines from the 1940s, ’50s and ’60s were full of gun advertisements directed to both youngsters and parents. “What Every Parent Should Know When a Boy or Girl Wants a Gun” was published by the National Shooting Sports Foundation. Another magazine advertised “Get This Cowboy Carbine with Your Christmas Money.” Just a few states even had age restrictions for buying guns. Private transfers of guns to juveniles were unrestricted. Often a 12th or 14th birthday present, from a father to his son, was a shiny new .22 caliber rifle.

Today, there is far less availability of shotguns, rifles and pistols than any time in our history. That historical fact should raise the question: Despite the greater accessibility to guns in previous decades, why wasn’t there the kind of violence we see with today’s far more restricted access to guns? Have rifles and pistols changed their behavior from yesteryear and they are now out committing mayhem and evil? To answer in the affirmative can be dismissed as pure lunacy. Thus, if guns haven’t changed, then it must be that people have changed. Half-witted psychobabble such as stopping children from playing schoolyard games like cops ‘n’ robbers and cowboys ‘n’ Indians won’t do much. Calling for more gun restrictions, gun-free zones and other measures have been for naught.

We must own up to the fact that laws and regulations alone cannot produce a civilized society. Morality is society’s first line of defense against uncivilized behavior. Moral standards of conduct have been under siege in our country for over a half a century. Moral absolutes have been abandoned as guiding principles. We’ve been taught not to be judgmental, that one lifestyle or set of values is just as good as another. We no longer hold people accountable for their behavior and we accept excuse-making. Problems of murder, mayhem and other forms of anti-social behavior will continue until we regain our moral footing.

Walter E. Williams is a professor of economics at George Mason University.