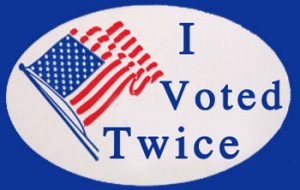 Suspicious voting patterns in a local Alabama election serve as a clear reminder of the need to fight potential voter fraud and protect the sanctity of elections.

According to a report Thursday in the Tuscaloosa News, 125 percent of the voting age population cast ballots in a Perry County municipal election held Tuesday in Uniontown. This includes an unusually high 45% of the total votes cast being absentee ballots, compared to a 3-5% statewide average, according to the report. 130% of the town’s population was registered to vote in the election.

“I seriously doubt that this is an isolated mistake, but rather serves as a glowing example to any naysayers that voter fraud is real,” Alabama Senate Majority Leader Jabo Waggoner said. “We have an obligation to protect the democratic process we hold so dear and will continue working to identify ways to fight against abuse,” added Senate President Pro Tem Del Marsh.

Under current Alabama law, citizens may present one of 19 acceptable forms of identification in order to vote, but many of them, including utility bills, bank statements and pay stubs, do not contain photos and are easily stolen, borrowed or replicated.

The Legislature last year approved a new, stricter standard requiring voters to present a photo ID in order to cast a non-challenged ballot. The law, which is slated to go into effect during the 2014 primary elections, provides free photo ID cards to citizens who do not already possess or cannot afford to purchase one.

“The Obama Justice Department has already blocked photo voter ID requirements in states like Texas and South Carolina, and it is likely it will continue its hostile actions towards Alabama, as well,” Alabama House Speaker Mike Hubbard said. “By working diligently against this needed and valuable honest elections tool, Obama’s liberal cronies and extremist groups like the ACLU are turning a blind eye to ballot box stuffing and making the case that the only way their side can win is through cheating.”

The Uniontown election provides clear evidence that Alabama’s recently passed photo Voter ID requirement should be approved by the U.S. Justice Department and put in practice for the 2014 statewide campaign cycle.

UPDATE: Thanks to a commenter I remembered a video from earlier this year of Alabama State Representative Jay Love sparring with Al Sharpton over this exact issue…

Visit NBCNews.com for breaking news, world news, and news about the economy