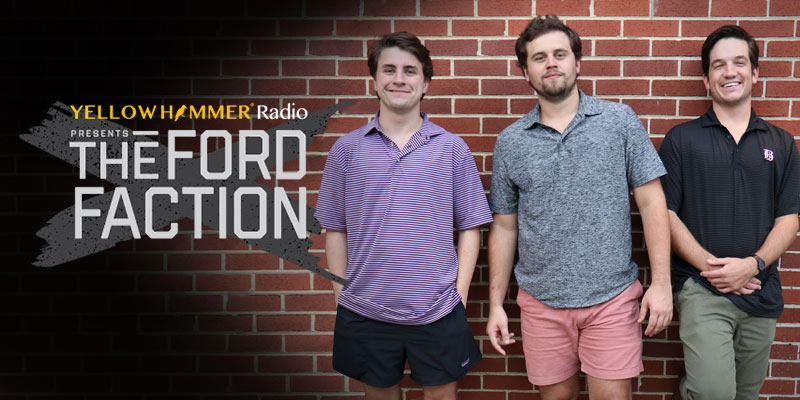 Wednesday at 1, Ford Faction and Chris Reid will interview Alice Martin, candidate for attorney general. Martin will be in studio to discuss her vision for solving Alabama’s opioid epidemic.

Wednesday at 2, Ford Faction and Chris are interviewing Sirius-XM host Louise Schiavone, MS on the challenge of communicating in a hyper-partisan environment. Schiavone is a senior lecturer at Johns Hopkins University Graduate Business School in Baltimore and Washington.

Thursday at 12, Ford Faction and Chris are interviewing John Ziegler, writer for Mediaite (based out of LA). The two will discuss Ziegler’s recent article on Glenn Beck’s refusal to endorse and support President Trump and how that decision has cost Beck’s organization. It was announced this week that 20% of Glenn Beck’s staff at The Blaze was laid off due to declines in profit.

Thursday at 12:30, Ford Faction and Chris are interviewing Joshua Thifault. Thifault works with Turning Point USA (a conservative campus group). Thifault will give his take on the end of free speech on campuses.

Thursday at 2:00, Ford Faction and Chris are interviewing Ryan Fournier, Fox News Contributor and former president of Students for Trump. Fournier will describe his unbelievable journey leading a national Trump organization and how his life has changed since becoming a Fox News contributor.

Friday at 1, Ford Faction and Chris will interview John Malcolm, VP of the Institute for Constitutional Government at the Heritage Foundation. The two will discuss the assault on religious freedom that’s taking place in our court system and what changes to expect in the coming years.

For which interview are YOU most excited?! This week’s guests will be calling in from L.A., D.C., Charlotte, and New York. Please tune into Yellowhammer News’s talk radio show “The Ford Faction” to hear our incredible line-up of guests!