The 2015 Made in Alabama Christmas Gift Guide 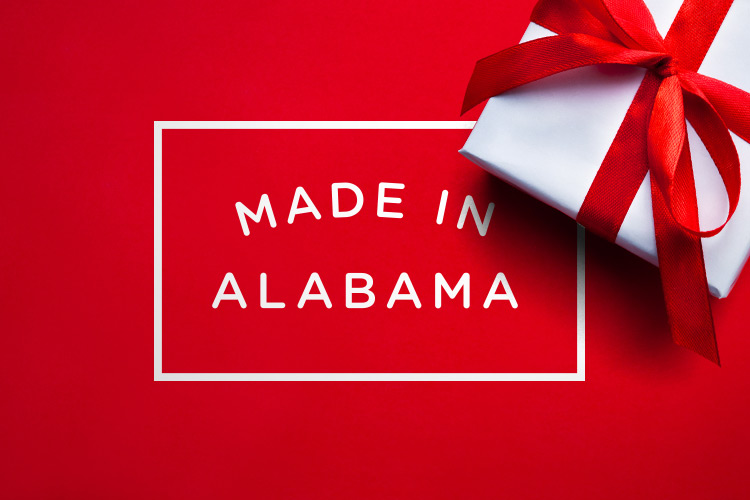 You already know that all kinds of great products are made in workshops, factories, studios and kitchens across Alabama. Even better, many of them make perfect gifts for the special ones on your holiday shopping list.

Our 2015 Holiday Gift Guide highlights the creativity of Alabama companies, artisans, entrepreneurs and others producing one-of-a-kind items ideal for sharing this time of year. Last year’s list of innovative homegrown products showcased a handcrafted rocking chair, organic socks, fine writing pens and other memorable items ready to be adorned with a bow.

The unforgettable Alabama-made creations in this year’s Holiday Gift Guide include a muscular motorcycle with striking lines, environmentally friendly candles made with recycled wine bottles, and the stone-ground ingredient for absolutely glorious grits.

Down-home gifts are a hit with consumers these days because they have an authentic, artistic feel, says Kathy Milam, owner of The Alabama Gift Co. in Gadsden, which specializes in Alabama-made products. She’s been in business since 2006 and ships items all around the U.S.

“I think Alabama is a cool place right now – not just Alabama but the South,” Milam says.

With that in mind, let’s dive into Made In Alabama’s 2015 Holiday Gift Guide.

When dignitaries from Japan and around the Southeast arrived in Birmingham for the SEUS Japan 38 conference last month, they were welcomed with a basket of treats from Tucker Pecan Co. as a gift from the Alabama Department of Commerce.

Founded in 1952, Montgomery-based Tucker is a pecan powerhouse, selling 20,000 pounds of roasted and salted pecans during the holiday season. Its pecans come straight from the orchard and are available in styles ranging from honey glazed to covered in chocolate.

The Tucker reputation is strong. According to a local saying: “It takes a Tucker to recognize a great pecan.” And earlier this year, MSN picked Tucker pecans for its list of “Enticing Edible Souvenirs From Every State.”

In September, Birmingham-based Confederate announced the launch of its next-generation P51 Combat Fighter, a bike with 200-horsepower V-twin engine and a price tag starting at $113,900. (It earned a spot on Forbes magazine’s 2015 list of the most expensive motorcycles.)

Fashioned entirely in aerospace-grade aluminum, the P51 is the latest in a line of extreme motorcycles from Confederate, which has been based in Birmingham since CEO Matt Chambers relocated his HQ following Hurricane Katrina. The company said only 61 P51s will be produced, each handcrafted by its team of professional master craftsmen.

Cycle World had this to say about the company’s bikes: “Tough, militaristic styling and bare-bones functionality positions every Confederate motorcycle model as an essential American machine.”

The stone-ground products are sold online and in the company store in Wilsonville, as well as in a number of specialty food stores in the Birmingham area. They are also served in many restaurants in the South and beyond.

Prices for their products range from around $5 to $8. They also sell farm-raised, grass-fed beef, raised on their farm in Chelsea.

Owners Cal and Christy Breed opened Orbix Hot Glass in 2002, and the Fort Payne-based studio’s handmade glassware has made waves. Cal, a Florence native, studied with many of the foremost glass experts before opening the firm, which stands on 26 acres bordering the Little River Canyon National Preserve.

“It’s a remarkable material,” he says of working with glass. “It’s unlike wood or metal — it’s unlike anything. It has its own life to it. You get to learn this material in so many different ways to be able to work with it. It’s just real special.”

Each Orbix piece is handmade, one at a time. Prices vary, with the Curly pitcher — the first pitcher designed in the Orbix Hot Glass studio – going for $245.

MADE IN THE DEEP SOUTH JEWELRY

Birmingham’s Michela Bruno Swafford based her Made In The Deep South jewelry line on a simple idea — start with vintage pieces of jewelry and transform them into unique items.

Her approach is to deconstruct vintage and antique pieces, some dating back to the 1800s, and mix them with other pieces and materials. The result is one-of-a-kind necklaces, cuffs and other pieces that have their own story to tell. In fact, each has its own “story card” that outlines its origins.

Swafford takes orders for custom pieces and her Made In The Deep South creations are sold at retailers throughout the South and in stores as far away as Rhode Island and Canada. That includes the Alabama Gift Co., where the line is a big seller.

Natalie Chanin’s Florence company is known as a high-end clothing designer and manufacturer, with organic-fabric garments hand-sewn by local seamstresses and artisans. Some Alabama Chanin garments can be expensive, with price tags north of $1,000, but others are within reach.

Carmen Preston founded this Birmingham firm in 2012 after learning how many wine bottles get thrown away every day. The Green Bottle Candle Co. repurposes used wine bottles from area restaurants as a vessel for its small batch, natural soy candles. The 100 percent soy, produced by US farmers, is hand poured in Birmingham; the hand-crafted candles have a lower melting point, allowing them to burn slower and cooler.

At Preston’s firm, human hands perform every step of the production process, from cutting and polishing the wine bottles and pouring the wax to applying the firm’s custom-made label.

The artisanal candles are available online ($22) and come in scents such as Orange Clove and Mistletoe & Holly, Tuscan Fig and Pomegranate.

For the down-home foodie on your list, you can never go wrong with a cookbook penned by a great Alabama chef, cook or pit master. Here are some suggestions:

• “Tasia’s Table” is a collection of recipes and stories from the award-winning cheesemaker at Belle Chèvre in Elkmont, Tasia Malakasis. She offers recipes with both Southern and Greek cultural influences, from goat cheese frittatas and goat cheese ice cream to buttermilk biscuits.

• “The Auburn University Cookbook” and “The University of Alabama Cookbook” are products of the divided Alabama family. Missy Mercer is a graduate of Auburn and the California Culinary Academy, while husband Browne Mercer attended UA. Together, they own Tomatino’s Pizza, Café Louisa and Louisa’s Bakery in Montgomery.