Rita Cowell is a 2021 Woman of Impact 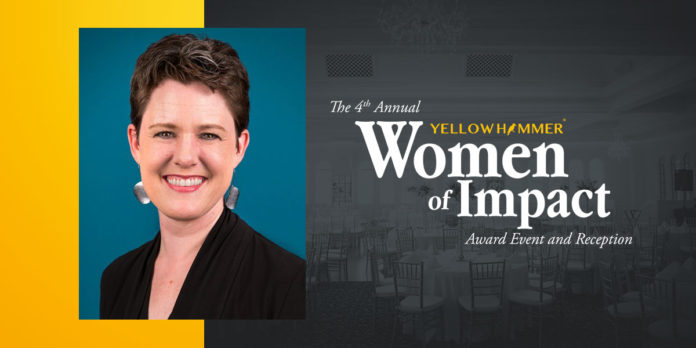 Rita Cowell, Ph.D., has always had an interest in neuroscience and behavior. From a young age, she knew she wanted to do research related to neurodegeneration primarily because she found the process by which people lose their personalities hard to handle on an emotional level. She has devoted her entire career to discovering ways to improve the lives of those who are suffering from and affected by these unforgiving diseases.

Now fellow and chair of the Neuroscience Department within the Drug Discovery Division at Southern Research in Birmingham, Cowell has an extensive list of awards and accolades in her field of study and continues to make an impact throughout the science and medical communities. She’s been published many times over and has received a steady stream of grants to keep her lab and research independently funded; the most recent from the National Institute of Neurological Disorders and Stroke totaling $3.3 million to study Parkinson’s disease, as well as an additional $594,000 for research related to frontotemporal dementia, a disease similar to Amyotrophic Lateral Sclerosis (ALS).

Originally from Peoria, Illinois, with a biology degree from the University of Illinois at Urbana-Champaign, Cowell watched firsthand as her grandmother succumbed to Alzheimer’s disease, which greatly affected the path she later took as a graduate student in neuroscience at the University of Michigan in Ann Arbor.

“There’s something about the brain that just fascinates me,” Cowell said. “Not only about the biology, but about losing who you see as yourself with this disease. My grandmother passed away in 1998, I finished college in 1997. It affects how you see things for sure.”

As part of her Ph.D. program, Cowell was trying to understand how the brain responds to stroke.

“While a stroke is obviously different from Alzheimer’s, you can still understand and learn about the basic process by which cells are dying,” she explained. “So, I would say that since the beginning of my research career, that’s always been a big question I’ve had: Can we learn more about the biology of dying cells so we can prevent it from happening?”

The most devastating of diseases, Alzheimer’s, Parkinson’s, Huntington’s and ALS are all neurodegenerative diseases characterized by a progressive degeneration of the central or peripheral nervous system. There are currently no cures or preventions for them. Cowell’s latest research has shifted to focus more on intervening or halting cell death in the brain, rather than fixing it: Understanding the why and how of cell death is of the utmost importance.

Cowell finished her Ph.D. using stroke models at Michigan, then stayed on for four more years of postdoctoral work, again focusing on cell death processes. From there, she was recruited to the University of Alabama at Birmingham (UAB) and began in 2006 as part of a revamp of the neuroscience community there. She came on as faculty in the psychiatry department, rising in ranks and taking on many different roles throughout her tenure at UAB.

“During that time, I was able to establish my lab, recruit graduate students, and I actually ended up receiving several grants,” Cowell said. “One was for Huntington’s disease, and more recently I’ve been getting into Parkinson’s. It sounds like I kind of dabble in a lot of different disorders, but the reality is that they’re all related to some extent. Any behavior, even regular behavior, requires the engagement of a certain circuit in your brain. Each disease is defined by the circuit, meaning that if you can find how the circuit gets sick and dies over time, then you can try and prevent it. So, while I’ve been looking at different diseases, it’s all trying to understand how neurons can maintain their normal health and what happens when they’re dying with these different disorders.”

In 2017, Cowell moved over to Southern Research as chair of Neuroscience, although she remains an adjunct professor at UAB. Southern Research was looking for a candidate who was interested in getting into drug discovery-related projects. Most of the work she had done until that point had been on the biology side of research and she was eager to reexamine her focus a bit.

“My career is primarily academic,” Cowell pointed out. “But it’s shifted a little because Southern Research is a not-for-profit institute that’s more on the drug discovery side. And so, I have refocused my research program to identify genes and proteins which may be good targets for treating patients.”

As such, Cowell has received several grants from the Michael J. Fox Foundation for Parkinson’s Research called Target Validation Studies, which are focused on determining whether manipulation of a gene or protein is effective in models of Parkinson’s disease. If studies show promise in models, then future experiments can explore ways to influence these targets in people.

In order to reach that goal, Cowell said as part of her research, she needs to first understand the biology of the Parkinson’s disease-relevant process in order to find the best drug.

Historically, many existing drugs were found to be effective without knowing the biological processes underlying their actions. For the neurodegenerative diseases Cowell works on, however, she must approach the process from the opposite side.

“We’re trying to understand the genes and proteins in cell death with the goal of developing drugs to interfere with the cell death process,” she said. “It’s the area you could call target identification. Once you understand the gene or the protein that you need to actually target, then you can develop the drugs to target that process. So, that’s why it’s still discovery-based.”

Since the diseases Cowell researches are aging-related and progress over many years. A majority take three to five years to complete, and results don’t always work out as expected. The amount of time and effort her research takes is exactly why funding is so important.

“It takes years of concerted effort and investment to be able to make progress,” she said. “When people start talking generically about cutting funding for research, you don’t know what you’re cutting. You don’t know exactly where things are going to lead, so you have to have a concerted effort for investment in discovery or you won’t have the tools you need when you need them. Turnaround on investment for neurodegeneration is slower than it is for diseases like cancer and you have to understand that from the start.”

While it can be frustrating at times, Cowell truly enjoys the day-to-day of her work, which is how she manages to stay motivated and engaged in her job. She conveys as much to her students, sharing with them her two-pronged approach for success:

“You have to understand yourself, what your strengths are, what your motivation is, what keeps you engaged in your work,” she said. “And you have to have your larger goals that you chip away at over time. You just have to balance those things to get up in the morning.”

Cowell’s own determination is fueled by what personally motivates her.

“For me, it was that I really enjoyed designing new experiments, finding new data and unveiling new ideas about the brain,” she said. “I was — and am — driven by my curiosity in science, but I also want to help people at some point. We have a larger goal; it’s not just that scientists are randomly fiddling with things that don’t matter.”

And matter they do. Cowell’s latest research in neurodegenerative diseases is relatively new to the scene, but it could be considered groundbreaking in her field. And it’s definitely impactful.

“I think the goal of identifying novel targets for drug treatment is where we need the science right now,” she said. “For Parkinson’s, there have been these ideas that just haven’t panned out. These are things that made sense to try at the time, but we need to start using novel approaches for target identification based on recent findings of disease biology.”

A cure may not be the answer for these diseases, but as it stands, the only treatments currently available are symptomatic; meaning only some of the symptoms are treated, but the disease itself is not stopped in its tracks. And that is really what’s at the heart of what Cowell is trying to do. Through the research she has conducted in her career — and continues to conduct — she has her sights set on halting these neurodegenerative diseases and blocking any further damage from occurring.

“It’s not that I’m actually going to be able to figure out all of it,” she admitted. “But my personal reward for all of this is that I feel like I’ve made my impact in this small area that I’m in.”

Yellowhammer News is proud to name Rita Cowell a 2021 Woman of Impact.

Sara Watkins is a contributing writer for Yellowhammer News and SoulGrown Alabama. You can find her on Facebook here.