Liz Williams is a 2022 Woman of Impact 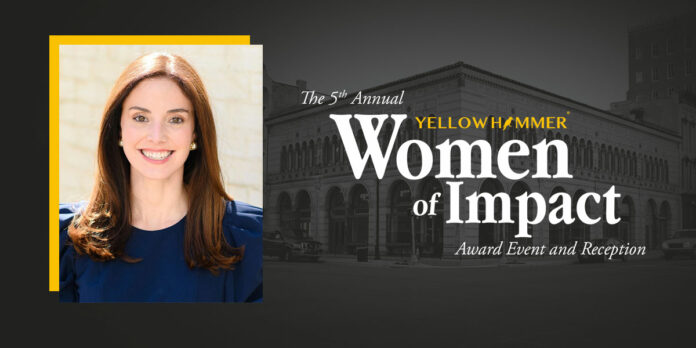 If you have contributed to a high-level Republican campaign in Alabama, Liz Williams has likely played a part in the donation.

Williams, a Montgomery resident and graduate of the University of Alabama, is the principal of EBW Development, which has been in operation for nearly a decade. She and her talent-rich staff have mastered the art of political fundraising.

Her professional career began in marketing and non-profit fundraising. Growing up in politics, Williams first entered the arena as a campaign finance director. From there, her business skyrocketed.

A candidate for public office can possess every quality imaginable of a great leader. The candidate can also have a strong message. Without the funds to reach voters, however, a campaign could simply not operate. This is where Williams’ expertise comes into play.

Positioning herself as the Yellowhammer State’s go-to fundraiser, Williams credits her clients for allowing her team to develop a winning strategy for their respective campaigns.

“We have really been fortunate with the clients we’ve had. Everyone has taught me something. We have to tailor our plan to the client,” Williams said. “Although everyone has a different style, they allow us to exert our expertise.”

Over the years, the fundraising guru has developed an expansive network among donors throughout Alabama and the Southeast. Maintaining relationships with this donor base coupled with the quality of her clients, according to Williams, has played a key role in her company’s success.

“I think it’s a combination of having fantastic clients who trust us to do our job, and having great relationships we’ve built over time with donors,” she said.

Never prescribing to a complacent mindset, Williams is always striving to hone her skills in such a vital and changing industry.

“It really takes doing it and being in the middle of things to learn how to fundraise for political candidates,” she said. “I’m still learning all the time as it is an evolving profession.”

Given that much of the field consists of female professionals, she said that many in her line of work support each other and hold a “mutual respect” for one another.

“When it comes to fundraising, at least in the state, I feel like it’s a very female-oriented field,” she said. “I think there’s a camaraderie, and some of the best people in the political business are women across the board. At least from my perspective, it’s a positive thing.

“With women in the field, I think there’s a mutual respect for sure.”

It would be impossible to quantify the impact Williams has had on the state as it relates to helping quality candidates be elected to positions of authority.

For Williams, it is “incredibly rewarding” to see her clients impact their constituents in a positive manner after being elected to public office.

“There have been some really proud moments where we have accomplished the impossible if you will,” she said. “And fundraising is really just a small part of it. We have fantastic clients that bring so much to the table. I think they all make a unique impact upon the state and are doing all they can to help us move forward.”

One of these candidates, U.S. Senate nominee Katie Britt, believes that Williams is “only getting started” on blazing her trail on the Yellowhammer State.

“Liz Williams is simply the best of the best,” said Britt. “She is unrivaled in her professional field, and I’ve witnessed firsthand the incredible love she has for our state. Liz is not afraid to take leaps of faith, and her diligent work behind the scenes is continually building an even stronger Alabama for our children and our children’s children.

“Above all, she is a caring, kind, and self-sacrificing friend, colleague, wife, and mom. Her impact on Alabama is only getting started.”

Successful leaders seem to always have one thing in common: they surround themselves with talented people who play a crucial role in the accomplishments of their respective enterprises.

Williams, an exceedingly humble leader, will be the first to sing the praises of her three-member staff, each of whom are women.

We’ve been able to put together a team of women who have allowed the company to grow,” she said. “They certainly have a unique skillset with a tremendous amount of experience on the state and federal side. “It’s not at all just me. We all work together.

“It’s our team that makes it happen and have really allowed us to go to the next level as far as taking on more and having success.”