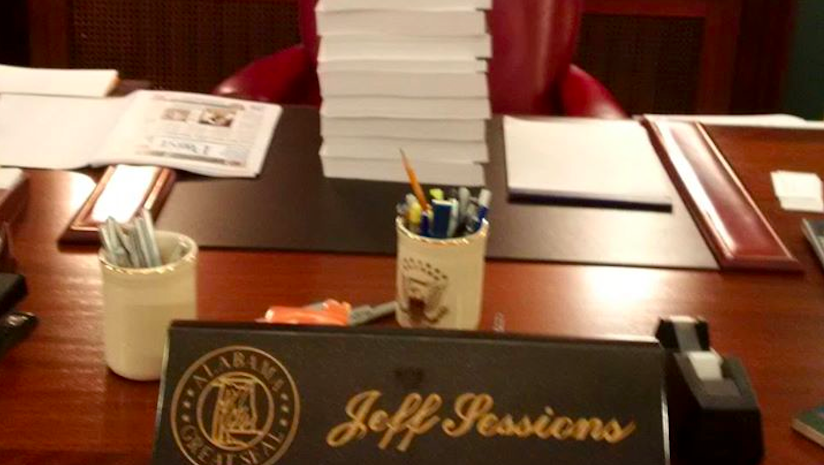 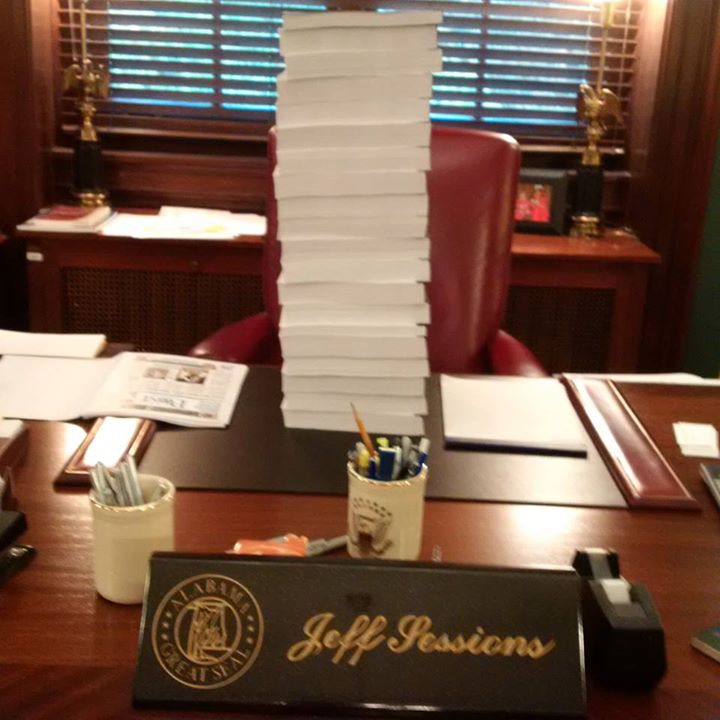 Sen. Jeff Sessions (R-Ala.) on Monday posted a photo of the Trans-Pacific Partnership (TPP) trade agreement stacked on his desk, giving Americans a stunning visual of just how massive the deal is after it was kept secret for months.

The biggest trade deal in history was classified until last week, with only two copies kept behind lock and key — one on the Senate end of the U.S. Capitol and another on the other end for the House. Only members of Congress and their top staffers with security clearance could access the document, and they could not make copies or take notes with them about what they read.

“The text of the Trans-Pacific Partnership runs 5,554 pages,” Sessions explained. “This is, by definition, anti-democratic. No individual American has the resources to ensure his or her economic and political interests are safeguarded within this vast global regulatory structure. The predictable and surely desired result of the TPP is to put greater distance between the governed and those who govern. It puts those who make the rules out of reach of those who live under them, empowering unelected regulators who cannot be recalled or voted out of office. In turn, it diminishes the power of the people’s bulwark: their constitutionally-formed Congress.”

Congress voted in June to reestablish a so-called “fast-track” for trade treaties. By giving this “Trade Promotion Authority” (TPA) to President Obama, trade deals can be finalized with a simple majority vote of Congress. Without TPA, such deals would be subject to amendment and would have to have conquer a 60-vote filibuster threshold in the Senate.

Sessions went on to explain that TPP creates a Commission, which alone has the authority to amend the agreement, further eroding the power of the legislative branch.

“This global governance authority is open-ended,” he warned. “It covers everything from the movement of foreign nationals: ‘No Party shall adopt or maintain…measures that impose limitations on the total number of natural persons that may be employed in a particular service sector…in the form of numerical quotas or the requirement of an economic needs test’; to climate regulation: ‘The Parties acknowledge that transition to a low emissions economy requires collective action.’

“These 5,554 pages are like the Lilliputians binding down Gulliver,” Sessions continued, referencing the tiny creatures who hold down the title character in the classic Gulliver’s Travels. “They will enmesh our great country, and economy, in a global commission where bureaucrats from Brunei have the same vote as the United States.”

To remedy the loss of Congress’s power, and prevent the TPP from being ratified, Sessions called on his colleagues to take the agreement off of TPA’s fast track.

But TPA has split Alabama’s congressional delegation. Senators Sessions and Shelby have been staunchly opposed, along with Congressmen Aderholt (R-AL4), Brooks (R-AL5) and Palmer (R-AL6). Congressmen Byrne (R-AL1), Roby (R-AL2), Rogers (R-AL3) and Sewell (D-AL7), however, voted in favor of giving that authority to the President.

Photo of massive trade deal on @SenatorSessions’ desk has some conservatives fuming https://t.co/acS81sDF04