PeggyLee Wright is a 2022 Woman of Impact 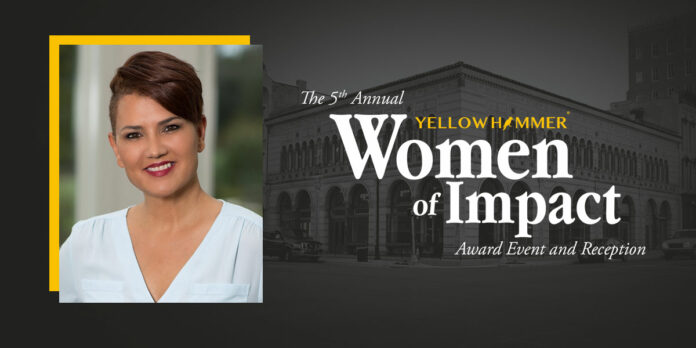 PeggyLee Wright used every one of those experiences to build The Company You Keep, a business development company focused on bringing together companies to do good for the Huntsville community.

When she started the business three years ago, Wright did not follow the traditional guidebook for growing a company like hers. Instead, she took advantage of five powerful enterprises at work in Huntsville that are rarely found in other cities.

They are the commercial and defense industry; effective nonprofit organizations; a strong academic environment for post-secondary learning; accessible city and statewide government leaders; and the military, whether they are government workers or green suiters on Redstone Arsenal.

“When you encourage all five of these entities to work together, magic happens,” Wright said.

Whether that is academic initiatives for students and children in the Huntsville area; DoD contractors wanting to build teams to do good in the community; or a commercial company looking to improve its image and social media, “When you do that, the rising tide lifts all boats and that is the business model for The Company You Keep,” she said.

Born in Fayetteville, N.C., Wright came from a military family that moved around most of her life. Schooled in New York, she and her husband TJ Wright moved their four children from Washington, D.C., to Huntsville, just weeks prior to the devastating 2011 tornadoes.

It was going to be a typical three-year tour and they would move on. As a military family, they rarely stayed anywhere long enough to build a bond with the city or invest in the community where they were stationed.

“We were so impressed with how Huntsville and really the state of Alabama, rallied around each other during that time, we immediately knew we would be staying here, investing in a community for the first time,” she said. “Huntsville was different.”

Education is Wright’s passion and after retiring from the Army, she went immediately into education as a teacher, a consultant and administrator. However, it was the business aspect to education she felt was missing, at least in terms of what she ultimately wanted to do.

“The Company You Keep was birthed out of my own evolution as a woman and what I wanted to be when I grow up,” she said. “We change what we want to do based on life experiences, going to school, getting a degree, getting a job, getting married, having kids. Our needs are forever evolving because of the needs of people in our lives.

“I believe that ability is a quality unique to women and something we do naturally. We are constantly shifting from being a wife to a mom to a worker to a boss to a volunteer, wearing all those hats at different times in life. It is only through change that we eventually become who we are and who we want to be when we grow up.”

In 2017, prior to opening The Company You Keep, Wright went through Leadership Greater Huntsville’s programs designed to grow leaders to build a better community. Wright said it had a huge impact on the success of her company and she does not believe she could have found the same success in any other place where she was a newcomer.

“Leadership Greater Huntsville not only gave me a deep dive, immersive experience into what Huntsville and the state of Alabama needs, but I built numerous relationships with other leaders in the Huntsville community,” she said. “It is easy to be inspired when you are surrounded by people with an entrepreneurial spirit.”

Many of the connections, the people, the network and all those relationships she had built, came out of the woodwork asking how they could get involved when she opened The Company You Keep. That led to The Company You Keep working with state entities to encourage them to do more within those five enterprises as well.

PeggyLee’s husband, TJ owns Offset Strategic Services. Their oldest son is at West Point. Their youngest son and twin daughters are all enrolled in the Alabama School of Cyber Technology and Engineering.

Dear to heart, PeggyLee is executive director of the ASCTE Foundation and deeply involved in fundraising for the school whose goal is to raise $30 million to pay for the newly completed ASCTE campus.

ASCTE is the nation’s only high school (9th through 12th grade) focused on the integration of cyber technology and engineering into all academic disciplines. It is also the first public, residential magnet high school to serve students throughout the state of Alabama, tuition and housing free.

“I love education but for education to be successful, it is important those same five enterprises be represented in fundraising efforts for the school,” she said. “That is the only way these students are going to stay relevant in terms of their curriculum, and the only way for them to understand the world they are walking into.”

Wright is active in several nonprofits in the Huntsville community. She is on the board for Huntsville SOF Network, an affiliation of Huntsville’s unique abilities, technologies, facilities, labs, programs, academia, and government, all motivated to connect cutting-edge solutions with Special Operations Forces across DoD/USSOCOM, National Intelligence Programs, and Interagency.

She has participated in Dancing for H.E.A.L.S. to help provide medical, dental, and optometry services to children in our local school systems; and she is a mentor for the WEDC Foundation, providing academic and professional guidance to young women. Wright is also president of the executive board for Fantasy Playhouse Children’s Theatre & Academy.

“Setting an example for others that it is possible to attain whatever crazy idea you have bouncing around in your brain,” she said. “If you have been chomping on an idea for a while and it won’t leave your head, why not take a stab at it? The worst that can happen is it doesn’t work out, and even then, you move on to things that will.”

And she keeps a focus on things that have a bigger purpose, things that either directly or indirectly impact someone else in a positive way.

“That will cause me to work double overtime because now I have a face on whom mine and others work, will have a great and long-term impact,” she said.