Patti Yancey is a 2021 Woman of Impact 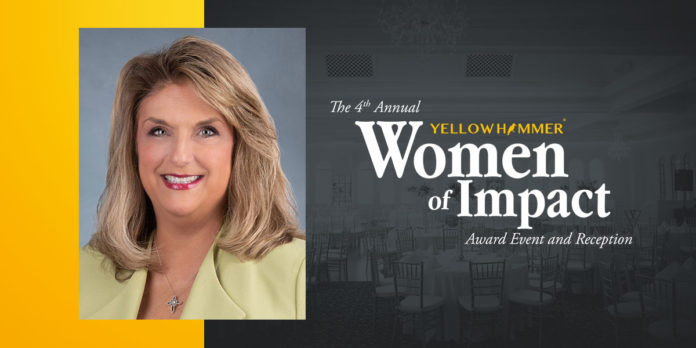 Leaders have the foresight to spot an issue and implement effective solutions to address it. For Patti Yancey, she has well exceeded her intention of addressing a critical need facing today’s youth by enacting real change that will foster the next generation of community leaders.

For years, many have recognized the longstanding need for children to learn the importance of civic engagement and understand the significance of being an active citizen. In 2008, Yancey founded the Liberty Learning Foundation to meet this need. The foundation facilitates active civics and character programs in K-12 classrooms by orchestrating events which empower schools, parents, local leaders and businesses to take ownership in the future of community and country.

Liberty Learning provides the state’s youth with education that is necessary in succeeding in today’s world. From career readiness and financial literacy to character-building and civic education, the foundation prepares students with the opportunity to leave their mark on the communities in which they live.

The story of Liberty Learning began when Yancey attended a World War II honor flight as a chaperone for one of the many veterans traveling to tour the monuments which honor their service. When their flight landed at the nation’s capital, she recalled seeing a sea of patriotic citizens in red, white and blue waving American flags welcoming those who had served the country to Washington, D.C.

The veteran she accompanied saw the crowd and was taken aback by the show of support. He then turned to Yancey and said, “‘Ms. Patti, why are they thanking me? I did what I was supposed to do, and I’d do it all over again – I did it for all these people standing here.'”

Yancey told Yellowhammer News this was a humbling experience for her.

“My granddaddy was a World War II vet, so I grew up having an appreciation for God and country,” she said. “It was at that moment that she realized the next generation of Americans may not truly come to appreciate the sacrifice of so many who have came before them.”

It was at that moment when she decided to take action.

She recalled thinking, “We’re never going to see this kind of spirit for country and love for country [u]nless we get some things I believed at the time had been taken out of classrooms.”

She was moved to address the decline of civics education in public schools. Shortly thereafter, Yancey formed an advisory board of business leaders, teachers, administrators and parents to see how they can address the issue and restore the fundamental pillars of American society in education curricula.

After two years of research, Yancey and her colleagues had determined what needed to be done.

“We definitely realized that civics had definitely taken a backseat,” she said. “We kind of formed the visual that said what we’re about to embark on needs to sit totally on the foundation of civics; the American dream, American pride – the opportunities that are afforded us here.”

Along with civics education, Yancey had decided that Liberty Learning’s core pillars needed to be character education, financial literacy and career development. She decided that the program needed to consist of project-based learning activities to make it a fun, hands-on experience for students.

Her vision has become a monumental success story and has impacted students of all creeds across the state.

Since the foundation’s inception, Liberty Learning has impacted nearly 250,00 students in 472 Alabama schools and communities, and its programs have honored more than 5,000 local heroes. Overall, Liberty Learning’s impact has led to an 18% increase in average test scores.

Yancey reflected on the program’s success and the strong support the foundation she established has received from the state as a whole.

“It is humbling [and] unbelievable,” said Yancey. “The state of Alabama is just filled with good people, and good people that want to invest in these people’s lives. It’s just kind of overwhelming to see how it unfolded.”

She has earned well-deserved praise and recognition for her commitment to the state’s youth.

Due to the enormous success of her foundation, Yancey was a 2014 recipient of the FBI Director’s Community Leadership Award, a 2015 recipient of the Power of Good Award, and was chosen by Girl Scouts of North-Central Alabama as a 2019 Woman of Distinction.

It is through Yancey’s love of country and her uniquely American entrepreneurial spirit that berthed such an amazing success story that has left hundreds of thousands of students positively impacted through her vision.

Yancey began building her impressive background in business directly after graduating from Auburn University with a bachelor’s degree in accounting. She has owned and operated multiple businesses over several decades and spent 20 years of her career as CFO of AlaTrade Foods and Davis Lee Companies.

Yancey is currently owner and CFO of Stovehouse Properties, an eclectic entertainment and shopping village in Huntsville consisting of live music, gourmet and cocktail bars, restaurants and more. Since its establishment in 2017, Stovehouse has quickly emerged as a go-to hub for entertainment in the thriving metropolis of Huntsville.

Yancey is a member of the Huntsville Committee of 100, Arab Musical Theatre, and past chairperson of the Distinguished Young Women of Marshall County Scholarship Program.

In her youth, Yancey knew she had a calling to leave an impact on society.

“I knew at a young age I had a strong passion for entrepreneurialism,” said Yancey. “I also knew I wanted to someday be a wife and mother, be involved in my community and state, and have a career. As I often said to my parents, ‘I want to do it all.'”

She added, “I have always believed in the ability of making dreams come true – whether those be my dreams or the dreams of others or the collective dreams of a cohesive team. I choose to make every day count and to live with purpose. Life is too short and there are too many wonderful opportunities to not be a go-getter. Entrepreneurialism is the backbone and lifeblood of any economy – and has been an integral part of my entire career.”

It is Yancey’s goal to inspire and empower the next generation of great Americans, and that goal she has achieved. Whether it is by helping Alabama’s youth author their own American success story or creating jobs as a hard-working entrepreneur, Yancey has no doubt left her mark on the state of Alabama.

Her story is that of a patriotic citizen who has sought out to live her American dream and forge a bright future for generations to come.

Yellowhammer News is proud to name Patti Yancey a 2020 Woman of Impact.