Molly Cagle is a 2020 Woman of Impact 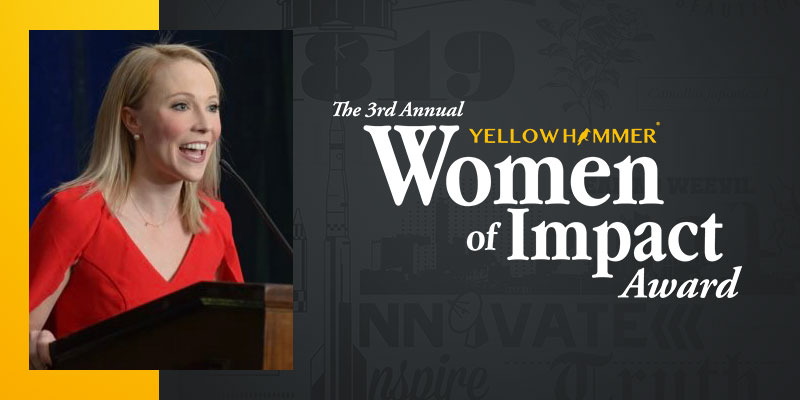 Similarly, our state is going to need this same type of collaborative servant leadership to enable a successful post-pandemic recovery, securing a prosperous present while paving the way for an even brighter future.

Fortunately for Alabamians, there are pro-jobs champions like Molly Cagle hard at work doing just that.

Cagle, vice president of governmental affairs for the Business Council of Alabama (BCA), has proven a perfect fit in executing the organization’s mission of “making a sweet home for business.”

In her first weeks on the job in 2019, Cagle was one of the key governmental affairs professionals that helped the historic Rebuild Alabama infrastructure package sail smoothly through the legislature into becoming law.

While that assignment might have seemed like a baptism by fire to outside observers, Cagle’s prior experiences had her well prepared for the job at-hand.

Indeed, fostering a pro-growth environment in which hardworking Alabamians can find high-paying, quality jobs has been Cagle’s mantra throughout her career thus far. Before joining BCA, Cagle served as the director of external affairs for Manufacture Alabama, representing many of the state’s largest employers. Prior to that, she worked on many of the same issues — and more — in the public sector as the Senate liaison for Senate President Pro Tem Del Marsh (R-Anniston).

A graduate of Troy University, Cagle in a recent interview with Yellowhammer News advised that part of what initially drew her to the world of governmental affairs was actually the relative lack of females in the field.

“I have always been interested in politics and government, but always saw the lack of women advocates and leaders in this space,” she said. “I just think women bring such a huge role to the table and have such valuable opinions and insight.”

Cagle outlined how she first pursued her passion by doing the leg work, such as going door-to-door for campaigns. This is why she advises others, “Start where you can. You’re not too good for or above anything.”

She still continues to practice what she preaches to this day.

“Just do whatever it takes to get the job done,” Cagle summarized of her mentality. “Work hard, keep your head down and be persistent.”

That mindset has paid off already for her, and Cagle is also executive director of ProgressPAC, BCA’s vaunted political arm.

However, getting here has not been an easy journey. There have been challenges along the way, including hurdles unique to being a female in a male-dominated arena, like a smaller peer network and less networking chances.

Cagle, though, views these obstacles as opportunities, not detriments.

This outlook of treating challenges as opportunities — and being grateful for them — is indicative of how Cagle lives her life. She explained where her motivation comes from.

“The most rewarding part of my career or my job is seeing others succeed around me,” Cagle said.

This is emblematic of her passion for mentoring and lifting up others, including peers and younger women.

Stressing the importance of “looking behind me and bringing women up,” Cagle commented, “That’s part of who I am, because the reason I am who I am is because of women.”

“A strong influence for me was my mom,” she shared. “She passed away when I was 28 but she taught me that every day is a chance to make someone else’s day better. You never know what fight someone else is fighting. Use this life and the gifts you are given to make the world around you better. Be generous with your time, help those in need and always be grateful for what you have.”

“A lot of times the difference in a good day and bad day is your perspective on it,” Cagle concluded.

Yellowhammer News is proud to name Molly Cagle a 2020 Woman of Impact.