Marsh: ‘Extremely optimistic’ on gaming bill — ‘We’ll get a piece of legislation out to the people to make a decision on’

MONTGOMERY — Senator Del Marsh (R-Anniston) on Tuesday afternoon provided an update on the status of his comprehensive gaming proposal that is currently awaiting the consideration of the Alabama Senate.

Before the legislature took a scheduled one-week break last week, the Senate Tourism Committee gave the legislation a unanimous favorable report and the full upper chamber began debate on the measure.

In the time since, Marsh has been working with his colleagues on fine-tuning the proposal, with the original hopes of it hitting the Senate floor again on Tuesday.

“It’s been a very productive week,” he told members of the press.

However, as he added, that collaborative process is still ongoing and. Marsh said he did not want to rush things by bringing the legislation back up this week.

“I feel very positive about where we are,” Marsh stressed. “I’m convinced we’re going to get a comprehensive piece out to the people (on which they can vote in a referendum).”

SB 214, the gaming proposal, proposes a constitutional amendment that would need to pass a referendum of the people if approved by the legislature.

Some of the finer details of how the provisions of SB 214 would be implemented still need to be codified through enabling legislation, which would come in the form of a regular bill. Marsh had originally intended on working on and passing that enabling bill later in the session after the hypothetical passage of SB 214 by the legislature; however, on Tuesday, he said he believes it will be better to consider them both at the same time.

As a result, he will be working on the enabling legislation for the next two weeks, so all aspects of the gaming proposal are on the table at the same time for the legislature to look at before either chamber takes a floor vote.

Marsh’s new timeline would have both SB 214 and the enabling legislation ready for consideration on the Senate floor as soon as Tuesday, March 9.

“I’m positive about the whole process,” he reiterated. “Everybody has been great participating in this process. And I am as confident as I’ve ever been that we’ll get a piece of legislation out to the people to make a decision on.”

When asked, Marsh clarified that he thinks he could have passed SB 214 through the Senate on Tuesday if he needed to.

“I had the votes today,” he commented. “What I’ve tried to do in this process — this is an issue that truly is going to have a significant, be a significant change for the state. And so it does not need to be rushed. Some of the questions I’m getting have been the ‘fine print’ questions — how I would characterize those questions. So I think that even though I have 21 votes today, I would rather have 25 votes in two weeks and show a strong, bipartisan consensus of the Senate. I think that would play well as it goes to the House. Because I want as strong a showing in the House, in that this is about getting something to the people of Alabama that addresses gaming once and for all, and how those revenues are going to be spent to the best ability of the state to better the lives of the citizens of Alabama.”

A key change that Marsh is considering to SB 214 would see the number of authorized casino locations rise from five to seven; there would be one casino per congressional district under that potential change. This would likely see the Dothan area have a licensed casino, in addition to another North Alabama location to be determined by the newly created Alabama Gaming Commission.

To this specific issue, Marsh provided the results of a poll he commissioned last week showing that only 26% of respondents indicated that they do not support casino gaming at all; the poll only surveyed likely Republican voters, and a poll including Democrats would likely show even higher support for gaming. 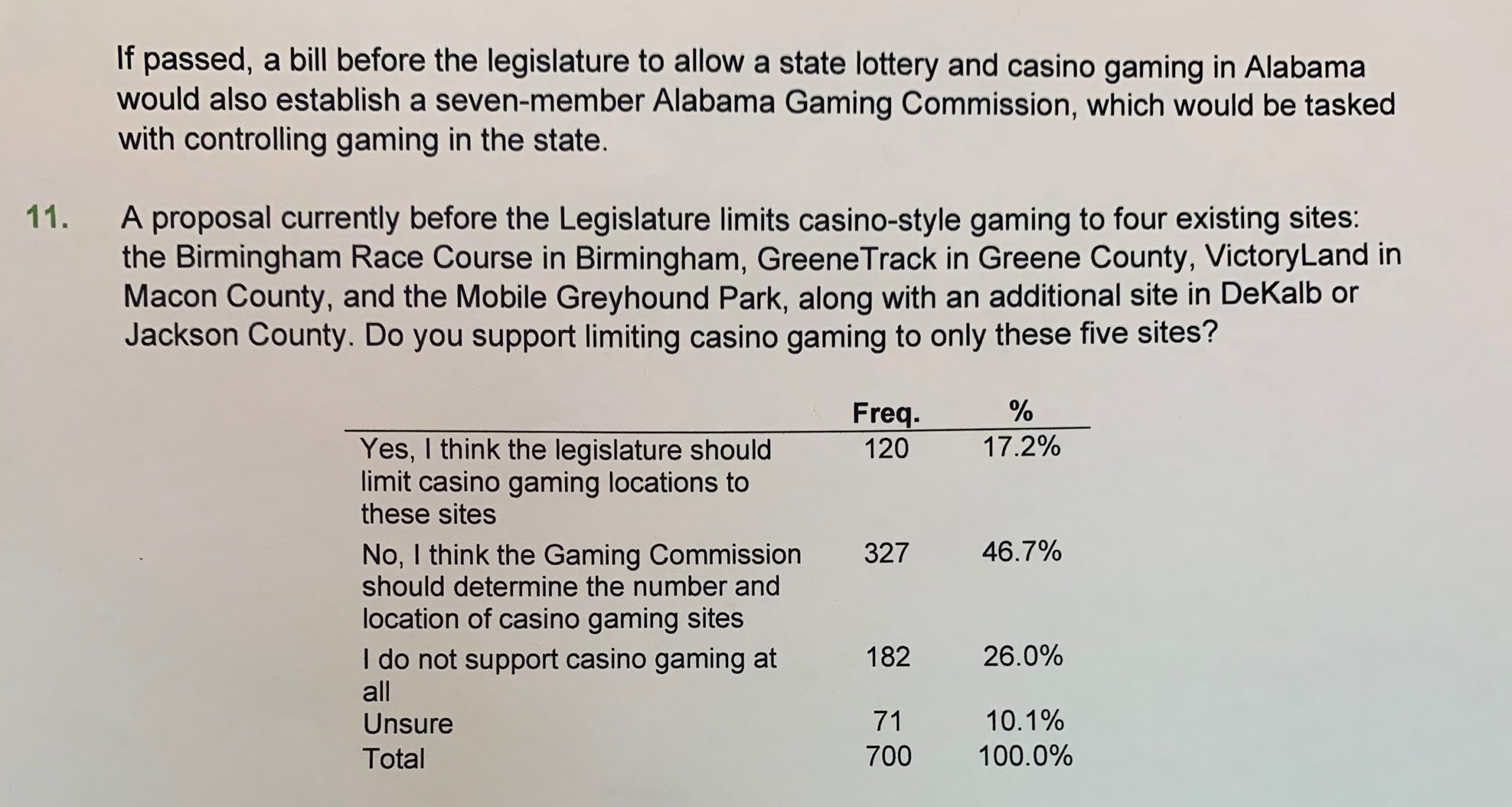 Whether the number of casinos allowed by the legislation is ultimately five or seven will come down to “a numbers game” with the vote count within the legislature, Marsh further advised; whichever option has the most legislative support will win out, although he underlined that his polling will help inform legislators in making the decision.

“I’m extremely optimistic about where we are on this piece of legislation,” he concluded, ultimately predicting the proposal will gain the approval of the Senate in two weeks or so and advance to the House.