Lynne Chronister is a 2020 Woman of Impact 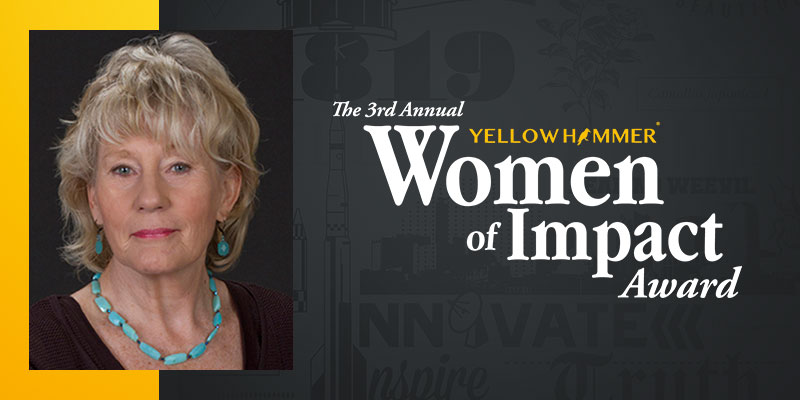 So many things in the world are worthy of intensive research. Yet, there are only so many resources available to make that research a reality.

That is where Lynne Chronister steps in.

A self-described “change agent,” Chronister is vice president for research and economic development at the University of South Alabama.

It is that ability to bring about change and push the boundaries of what is possible that has sustained her throughout her remarkable career.

“I am not doing my job if I look around campus and all I see is ‘status quo,’” Chronister explained in a recent interview with Yellowhammer News. “Research, by its nature, changes our healthcare, our knowledge, how we understand and perceived cultures and creates new technology. If none of this is happening, then leadership and the necessary support are lacking. I get to see change and progress every day. And I get to share, mostly vicariously, in the successes of so many people. I am excited every time one of our researchers and scholars here at South Alabama receive a grant that will enable a new discovery or support the development of a new technology.”

For more than two and a half decades, Chronister has crafted strategic plans to execute and fund countless research projects at the University of South Alabama and beyond.

The thought of extending people beyond their knowledge base has been present throughout her journey.

“I have a picture on the wall of my office that I have carried with me every place I have been,” she noted. “It is part of the Story People series created by Brian Andreas, and it says, ‘Most people don’t know that there are angels whose only job is to make sure you don’t get too comfortable and fall asleep and miss your life.’ How can you not love a profession that always keeps you uncomfortable and awake?”

The journey which brought Chronister to such a vital position at the University of South Alabama has been a lengthy one.

She likes to say that she got into research administration “accidentally” or “sideways.”

A graduate of the University of Vermont, with an undergraduate degree in Experimental Psychology, she obtained a position with the Vermont Department of Corrections in the Research and Program Evaluation Division.

“Actually, for most of my time there, I was the division,” she jokingly offered. “So they put me to work writing grant proposals and then managing the awards. It turns out, I really enjoyed the challenges and the processes involved in writing and seeking grant funding.”

“I never really intended to become a research administrator and didn’t even know the profession existed,” Chronister remarked. “My plans were to be a psychiatrist, instead I went sideways into a career that has been a joy and incredibly fulfilling.”

She says the rewards attached to her career have been plentiful.

“There are not many professions where you have the opportunity to work with the most brilliant, driven people who make incredible discoveries and share them with the world,” Chronister stated. “I absolutely love working with researchers and scholars who are possibly doing work that will change the world or increase our quality of life through new drug development or unearthing ancient civilizations. It is so rewarding to know that sometimes you have a role in a young researchers’ success in obtaining grant funding. And to know that grant may impact our lives in the not too distant future.”

Chronister cites transparency, communication and an awareness of leadership capacity as attributes contributing to her success. In addition, persistence is an essential part of her profession.

“Research and research administration are areas that you don’t usually succeed the first time you try for funding or try finding a cure for COVID or cancer, or really any other research accomplishment,” she explained. “It is all trial and error and then eureka! So sticking with people and projects is critical.”

Chronister recalls the advice she received from two of her mentors as she ascended her profession. The advice to continue looking forward is something she took to heart and has passed on to others.

“One said to me on the first day of my first job in a leadership, management role, ‘Remember, this is the day you begin to prepare for your next position,’” said Chronister. “I remember taking slight offense, thinking that I just got this position, why would I start planning to leave? But after the initial negative reaction, I realized that what they were saying was ‘If you look forward to the next step on your career path, you will be sure to do the best job possible in your current position.’”

For women, specifically, entering the profession, she offers some wisdom previously passed on to her from one of those mentors.

“Another mentor said to me a number of times, ‘We should get over our Midwestern modesty,’” she recalled. “What she was telling me was to step up, don’t step back and wait for someone else take the lead. I have shared this advice with many women, and hopefully it has helped guide them as well as it has me.”

The road ahead for Chronister and her colleagues will continue to bring them in contact with an endless stream of problems and opportunities requiring their expertise. And that is something from which she draws significant motivation.

“Every day, interacting with our faculty and staff, I learn something new,” she said. Research administration is one of those professions that renews itself constantly so there are always new challenges and new reasons to be excited about coming to work every morning.”

Yellowhammer News is proud to name Lynne Chronister a 2020 Woman of Impact.