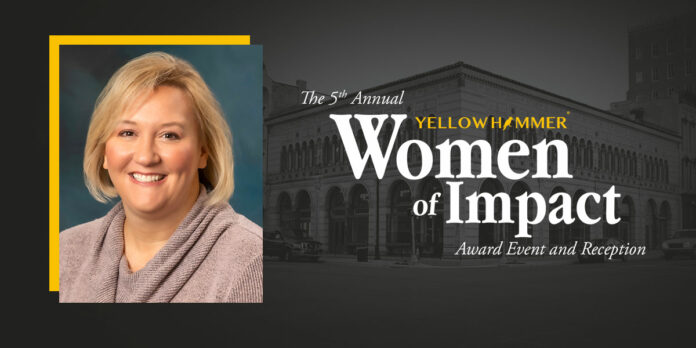 With more than 20 years of experience as a board certified family medicine practitioner, Dr. Julia Boothe is the founder of Pickens County Primary Care in Reform. She also serves as the president of the Medical Association of the State of Alabama, where she is working to promote the state’s new telehealth law and the extension of Medicaid coverage for mothers.

Boothe became interested in medicine at a young age, while volunteering at what is now Northport DCH in her hometown as a junior high and high school student. Though she came from a family of educators – dad was a high school principal, mom was a teacher – she volunteered around 30 hours a week at the hospital during summer break.

She earned her undergraduate degree at the University of Alabama. Boothe was in the pre-med honors society group and worked at what is now University Medical Center – the family medicine residency training site.

“That’s where I really got introduced to family medicine and found it interesting,” she said.

After graduation, she received her master’s in public health from UAB and began medical school there. During that time, she did a rotation in Fayette and Carrollton, and that’s when she realized rural family medicine is what she wanted to do.

Throughout medical school, Boothe continued gaining exposure in rural medicine, even moonlighting as a resident in rural emergency rooms. She began practice in Carrollton as soon as she graduated in 2002, and was employed by the local hospital there for seven years.

At that time, the physician in Reform was moving and the hospital wanted to protect that clinic, so they asked Dr. Boothe if she would be willing to relocate. She agreed and worked there for several years before deciding to “swim upstream of most everyone else in medicine and not be employed.”

So, Boothe bought the building from the hospital and started her own practice there.

Through Pickens County Primary Care, Boothe also works with four school-based clinics in the county. She works to increase education by offering  screenings, particularly concerning mental health, and treatments that might not be available to the students, otherwise.

“That has been key to keeping kids here in school,” she said. “We know if we can get them to school and to stay there, we have a better chance of them making it through school. We have seen a significant impact by adding those clinics. That’s just another side of me where the teachers in my family come in.

“I know how important that is.”

“It’s been a really interesting thing,” Boothe said. “The medical student ratios are about 50 percent female, but that is not what we see in practicing. It’s going to take a long time for that pendulum to swing until it’s even. It’s still kind of a unique thing for females to be in leadership in medicine, but we’re breaking lots of barriers in Alabama. There are a lot more females in family medicine, so leadership in our specialty is not quite so surprising.

“At the state level, though, it’s going to take a long time to see that shift. Our board looks much more diverse than it did even 10 years ago, so we’re really working on that and that is one of our goals with the Medical Association.”

Boothe is also involved with Aledade and sits on the Board in Alabama for the physician-led Accountable Care Organization that offers a newer way of overseeing Medicare, as well as some commercial groups.

“It’s how we take care of some of our Medicare patients,” she said. “My involvement with the Medical Association is how I got involved in the Care Alabama group, working to get that pilot program where we’ve expanded Medicaid for the full year. It used to be just six weeks, so we’re hoping that’s a step toward Medicaid expansion.

“There are a lot of reasons that it didn’t go through before, but there’s a chance here for our state to be able to go forward with that.”

In addition to working toward Medicaid expansion for the state, she is also chair of the Joint Committee for Collaborative Practice, which is the joint board between the physicians, nurse practitioners and midwives throughout the state. Collaborative ability is something Boothe said she cannot go without to make her practices with nurse practitioners, in nursing homes, in school clinics and in her office clinics run efficiently.

“We are trying to make sure we are doing the best we can so people can practice at the top level of their training,” she said. “And also make sure we’re dotting our I’s and crossing our T’s and making sure no one is left out there on their own floating around without understanding.”

Boothe and her husband have been married for nearly 25 years. They have two daughters, ages 20 and 15. Outside of her work and leadership roles in the medical community, she spends her spare time keeping up with them and their involvement in barrel racing. She is an avid fan of the University of Alabama athletics, a passion she inherited from her family.

Yellowhammer News is proud to name Dr. Julia Boothe a 2022 Woman of Impact.